Takeaways from the election 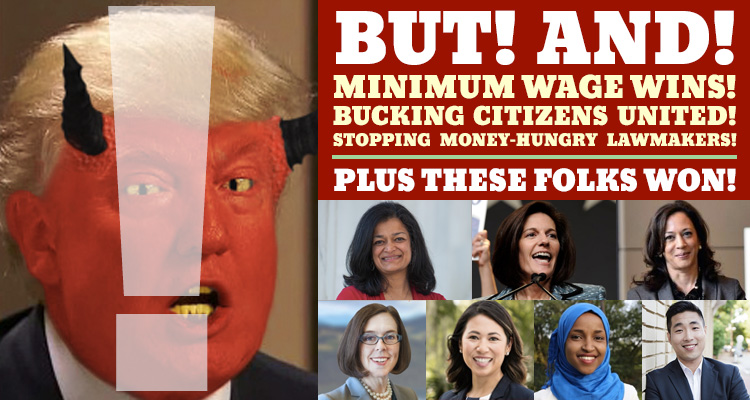 Start with Day One for President Trump (gotta get used to saying that). He will need to be up-and-at-’em no later than 12:01 am, for during his campaign he promised to get oodles of big stuff done on his very first day in office, including: “Repeal Obamacare;” Begin working on impenetrable, physical, tall, powerful, beautiful, southern border wall;” Meet with Homeland security officials and generals to begin securing the Southern border; Fix the Department of Veterans Affairs; “Repeal every single Obama executive order;” Suspend Syrian refugee resettlement; “Get rid of gun-free zones in schools;” “End the war on coal;” “Defend the unborn;” “Start taking care of… our military;” And convene top generals and inform them they have 30 days to come up with a plan to stop ISIS.

Good grief! Americans have actually put a xenophobic-misogynous-racist-nativist-narcissistic blowhard in the Oval Office. Has our country gone right-wing? Or completely nuts?

No. Trump was not elected on issues, but on anger – a deep seething fury that the economic and political elite themselves have created by knocking down the working-class majority, then callously stepping over them as if they didn’t exist. Exit polls revealed that most Trump voters don’t think he’s any more honest than Hillary Clinton (only 38 percent of all voters had a favorable opinion of him, with only a third saying he was qualified to be president). Also, his own voters disagree with much of his agenda (especially his grandiose wall across the Mexican border).

But his core message – “The system is rigged” by and for the elites – came through loud and clear to them, so they grabbed him like a big Bois-D’arc stick to whap the whole establishment upside its collective head.

The major message from voters was, “We want change.” The Donald was the one most likely to shake things up (or blow things up), while Clinton clearly was the candidate of the status quo. As a West Texas farmer told me several years ago, “status quo” is Latin for “The mess we’re in,” so change voters, including those who would normally side with Democrats, cast their ballot for the Republican.

Indeed, on specific issues, voters around the country supported very progressive changes offered to them in a variety of ballot initiatives:

Trump is in the White House, but the takeaway from voters in this election is a mandate for progressive economic populism and more diversity among public officials.