The industry appeared to lose a round to opponents in May when a much awaited ruling from Obama’s Interior Department came down. It required for the first time that gas drillers on public lands must reveal the chemical recipes they use for fracking each well. But hold the hallelujahs. The Obamacans had quietly “adjusted” their original February proposal–rather than having to disclose the chemical mix 30 days before drilling could start, the final rule says that frackers must reveal it only after the dirty deed is done.

A battalion of fracking lobbyists (Exxon/XTO, Anadarko, et al.) had rushed to the White House this spring with the usual anti-government whines about the cost of paperwork and the slowing of permits. But, come on–people’s water, air, health, livelihoods, and general well-being are at stake here! Permits ought to be damned hard to get, and preferably stopped outright. Obama’s team tried to shrug off their backpedaling by claiming that revealing the chemical mix before or after injecting it into our environment did not matter. Really? Try telling that to the people who’re getting sick, seeing their home values plummet, losing jobs and income, having their dreams dashed, and even feeling the ground under them tremble. 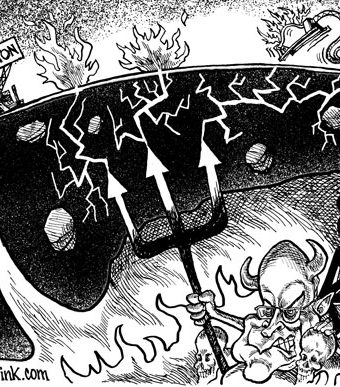