You don’t hear much about it, but there is another path to justice for some consumers who’ve been wronged by a corporation: Small claims courts.

These are relatively simple, inexpensive, and quick do-it-yourself judicial forums administered by states all across the country. Less formal than full-fledged court systems, and minus the star chamber quality of corporate-rigged arbitrations, these entities allow the “Davids” who’ve been ripped off for a few thousand dollars to go after the Goliath who cheated them–and have a decent chance of winning.

Unlike forced arbitration procedures, small claims courts charge minimal fees (returnable if you win), operate in public, are presided over by real judges who must follow rules of law, allow you to call witnesses, let you represent yourself and conduct your own case if you choose, and protect your right to appeal the judge’s ruling. Also, thanks to the internet, the successful arguments, evidence, and other documents in cases where a David defeats, say, the AT&T Goliath, are readily accessible to help guide other victims.

It’s not an easy undertaking (“He was just so vicious,” one successful claimant said of the AT&T lawyer in his case), but persistent individuals often win–and isn’t that special? It’s not merely about the money, but the justice.

To find a small claims court near you, consult your local state courts or bar associations. 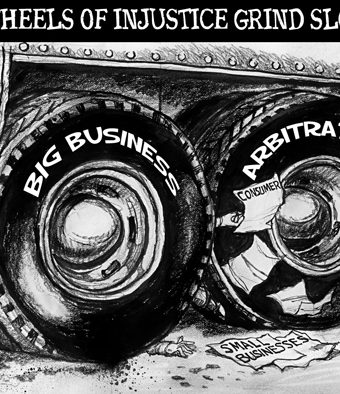