And how’s that war on poppies going?

And lest we get completely distracted by Iraq War III, here’s some breaking news from the frontlines of America’s longest-running war (going on 13 years): Afghanistan.

As you know, this life-destroying, money-sucking wreck of a military escapade has not gone at all well for Team USA, having failed to crush the Taliban, plant the flower of democracy, or even slow the elite’s culture of corruption. But now I bring hard news about the most modest of American goals in Afghanistan, namely defeating the poppy flowers. Yes, even fields of flowers have gotten the best of us.

After Bush-Cheney invaded, one major priority was to stop the planting of poppies, the flower that produces opium and heroin. Afghanistan was number one in world opium production, the sale of which financed the repressive Taliban forces. For a decade, our troops have eradicated poppy fields, lectured farmers, paid officials and farmers to switch to alternative crops, and waged all-out war on the pretty flower that turns so ugly.

Now, having spent 10 years and $7.6 billion on the Afghan Poppy War, where are we? A new report by a US Inspector General reveals that there was, of the flowers last year, producing an all-time record harvest that generated some $3 billion in profits for the Taliban–a billion more than the year before. Afghanistan now supplies 95 percent of the world’s opium. 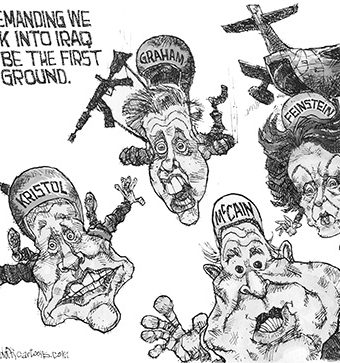