At last, a principled stand in Congress

Is there no balm in Gilead… or in Washington? Will no Democrat soothe the people’s anger at the constant giveaways to the rich from our depleted public treasury? Is there at least one strong populist vertebra in the weak spine of the Democratic congressional caucus?

To the amazement of the White House, Democrats on Capitol Hill erupted in spontaneous combustion last month when they learned that Obama had so easily surrendered to the Republicans on awarding extra-special tax breaks to the ultra-wealthy. The fire on the Hill flamed higher and hotter when the President petulantly scolded the Dems as a bunch of liberal “purists” who don’t understand the art of political compromise. This is the best deal there is, he insisted, and Congress should just vote for it.

Instead, at a raucous caucus session the next day, House Democrats broke out in a prolonged chant of “Just say no”– then they did just that. Led by Reps. Peter DeFazio of Oregon and Lloyd Doggett of Texas, they enthusiastically (and nearly unanimously) passed a resolution saying that the tax proposal submitted by Obama should not even go to the floor for a vote. “If it’s take or leave it,” declared Doggett, “we’ll leave it.”

This open defiance by progressives whom they’d long scorned and taken for granted stunned everyone in the White House. Scrambling to put down the rebellion, they even reached into the Democratic cedar closet and pulled out Bill Clinton! The big galoot is certainly likeable and a good talker, but come on–did the White House really think that his endorsement would cause progressive Democrats to swoon, fold their tents, and abandon their principles? After all, Clinton’s tenure was marked by a litany of craven surrenders to the rich and powerful, so it was surreal to see this completely corporatized ex-president blessing Obama’s surrender to the same elite. “I don’t believe there is a better deal out there,” Clinton lectured to lawmakers who knew that was blatantly untrue.

Ultimately, presidential power and ferocious lobbying prevailed, but Obama got only 143 votes from his party in the House (out of 255 Dems), forcing him to align with the GOP to deliver this shameful boondoggle to the rich.

While the rebellious Dems lost this vote, they won a measure of respect by showing some populist spunk. Please do it more often. 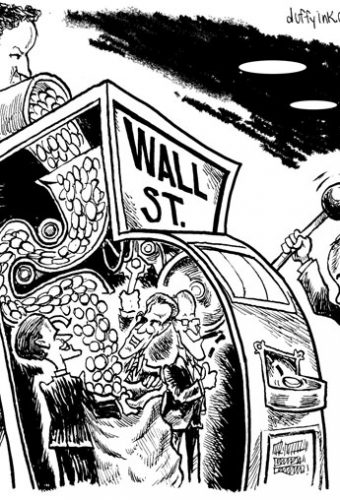