With the encouragement of Democrats-from-Mars

LOOK OUT–HERE THEY COME AGAIN! Bush & Buckshot are riding their little stick horses, waving the bloody flag of 9/11, demonizing another Muslim nation, shouting warnings about weapons of mass destruction, bellowing for regime change, and generally trying to whoop up a new war. Having done so well in Iraq, George W and Cheney are pushing feverishly to hype up a national-security threat and commit our nation, our bedraggled military, our depleted treasury, and our country’s already-tarnished name to another of their fantasyland, neocon, preemptive invasions of a sovereign people who are doing no harm to us. Their target this time: IRAN.

You might be thinking, oh, come on, Hightower, surely not. You’re paranoid–even the Bushites aren’t that crazy. I wish.

The drums of war

For such leading neocon zealots as Norman Podhoretz, bombing and even invading Iran are about protecting “our” Mideastern oil, strengthening Israel’s regional power, and continuing Western control of the restive Muslim majority in the Middle East. Podhoretz and other true believers assert that there’s an urgent need for Israel and the West to crush Iran’s Muslim government now, frantically wailing that it intends to destroy America and control the world. Even though Iran has made no threats to the U.S., the neocons see regime change there as the key to winning “World War IV” (they insist that the Cold War was World War III) against what they have dubbed “Islamofacism.”

How nutty are they? Podhoretz concedes that by attacking such an influential Islamic nation, Bush would “unleash a wave of anti-Americanism all over the world that will make the anti-Americanism we’ve experienced so far look like a lovefest.” Yet this Dr. Strangelove maniacally declares, “I pray with all my heart that he will.” Now there’s a prayer to a truly fiendish god!

George W, who is so besotted by Podhoretz that he has bestowed the Presidential Medal of Freedom on him, has bought into this guy’s insanity. Adopting Podhoretz’s inflamed doomsday stance, Bush recently accused Iran of preparing for global war (though W only ranks it as WW III), and Bush’s bombastic sidekick, Cheney, has now threatened that Tehran will suffer “serious consequences” if it doesn’t do what Washington wants. Just as they did in the run-up to their 2003 Iraq attack, the Bushites are now pounding out a drumbeat of propaganda to soften up the public, enlist the compliant media, and cow soft-spined Democratic leaders. You’ll recognize some familiar themes (a.k.a. lies) in BushCheney’s rationale for a “preventive” war of aggression against Iran:

Claim: Iran is in cahoots with al Qaeda, the demons who crashbombed America on 9/11. Actually, no. Iran is a Shiite nation that has long been in opposition to the Sunni-exclusive Islam preached by al Qaeda. Indeed, even before al Qaeda’s attacks on America, Iran’s leaders vehemently opposed the terrorist group’s presence in neighboring Afghanistan, and Iran was one of the first Muslim countries to condemn the 9/11 assault. Iran also has willingly turned over al Qaeda suspects to the U.S.

Claim: WMDs! Iran is on the brink of making a nuclear bomb, thus posing an imminent threat to America and to our national interests. Not so. Iran has no nuclear weapons and is nowhere near having the ability to build one. As a signer of the Nuclear NonProliferation Treaty, Iran has the right to enrich uranium to make electrical power (something our own country does every day). The Iranian government regularly allows inspectors from the International Atomic Energy Agency access to its nuclear facilities, and this UN agency (which is the one that turned out to be right about the lack of WMDs in Iraq) has found no evidence that Iran is trying to make a bomb. Even if it were, it would be years away from having one. There certainly is no imminent threat of an Iranian nuclear assault on any country, including our own, which is 7,000 miles away. Plus, Bush’s own former top commander in Iraq, Gen. John Abizaid, points out that the U.S. lived with a nuclear Soviet Union throughout the Cold War and now lives with a number of nuclear nations, including China and Pakistan, so “there are ways to live with a nuclear Iran.” It’s simply a lie that the Bushites must rush to war to keep us from being nuked.

Claim: Those dastardly Iranians are meddling in our war in Iraq by supplying weapons to our enemies and by sending intelligence agents to undermine Iraq’s government. Not likely. While some Iranianmade weapons have turned up in Iraq, there’ve been no findings of a large or regular influx and no evidence that the Iranian government itself is even tacitly behind it. Remember that Iran’s leaders are Shiites who do not like al Qaeda and do not support the Sunni insurgency, so the only Iraqi force that Tehran would want to help is the Shiite majority that Bush himself has put in charge. As for Iranian “operatives” in Iraq, the two countries share long familial and cultural relationships, so there are a lot of Iranians in Iraq all the time. In fact, Iraq’s Shiite-led government is pro-Iranian and has many economic and even military agreements with Tehran. Indeed, when U.S. troops “captured” a group of Iranians in a Baghdad hotel this summer, they turned out to be energy experts invited to Iraq by Prime Minister Maliki, who had them released.

Not that Iran’s military/political/ theocratic leaders are a bunch of sweethearts, by any means. That country’s loudmouth, Holocaust-denying president, Mahmoud Ahmadinejad, makes himself an easy target for Bushite demonization, and all peace-seeking governments must be vigilant toward Iran’s potential for belligerence. This requires steady engagement, smart diplomacy, military subtlety, and careful consideration of the complexities embodied within Iran’s rich, proud, 6,000-year-old culture.

Unfortunately, BushCheney doesn’t do engagement, diplomacy, subtlety, or complexity. If there’s an international need to shell a pecan, the Bushites go at it with a sledgehammer, blissfully ignorant of their own ignorance. Do you think, for example, that George W is even aware that President Ahmadinejad can rant and rave all he wants, but he is not in charge of his country’s foreign policy, which is in the firm grip of Iran’s supreme leader, Ayatollah Khamenei?

But realities did not deter Bush and the neocons from miring our country in Iraq, and now they are aggressively putting us on a path to war with Iran.

Yes, the U.S. Air Force and Navy have the razzle-dazzle firepower to destroy 2,000 Iranian targets in short order (not to mention thousands of Iranian civilians, for many of the targets are in populated places). But what happens the next day? Remember those neocon promises, just before the bombing of Iraq in 2003, that our troops would be showered with rose petals by a grateful public? Here we go again. Still intoxicated with the same ideological delusions, the neocons offer nothing but vague assurances that the Iranian masses will greet our forces as liberators and spontaneously overthrow the Tehran regime. In fact, opposition leaders inside Iran say that even the talk of a U.S. military attack is disastrous for their movement, for such reports strengthen hardliners in Iran and weaken those who want to reach out to the West. Iranians are Iranians first, and when a foreign power threatens to bomb or invade their country, they unite.

On Day Two (as well as on Days Three, Four, and so on), Iran most certainly will respond, and the results could be truly hellish for America. That furious wave of anti-Americanism that Podhoretz gleefully predicts would have explosive results in Iraq (further endangering our besieged troops), in such neighboring countries as Saudi Arabia, in the cities of Europe, and right here in the States, where our own citizens could become retaliatory targets.

Then there’s oil. Iran and its allies could block the narrow Strait of Hormuz, which connects all of the oil-producing Persian Gulf states to their foreign markets. Up to twenty-five percent of the world’s oil must pass through this strategic waterway, and shutting it down would cause prices to zoom astronomically, creating havoc for our oil-soaked economy.

You might hope that cooler heads will prevail. Republican political operatives, for example, are aghast at the possible ’08 fallout (“Every Republican is going to be defeated,” cried one). Also, the generals don’t want this–they know that they don’t have the manpower for a real war with Iran. Nor will Bush have a “coalition of the willing” this time–even the doggishly loyal British government thinks attacking Iran is madness. Then there’s Putin of Russia, who pointedly traveled to Iran last month to declare that no one should “even think of making use of force in this region.”

However, as a former Bush official told Hersh, “Cheney doesn’t give a rat’s ass” about any of that, “and neither does the president.” The chickenhawks are screeching for war, and they are immune to sanity.

Well, surely, you say, the Democrats will finally stand up to these knuckleheads. After all, Congress has all the power it needs to say no [see last month’s Lowdown], and the time for saying it is now, before the shooting starts, before the Bushites start hiding behind the rhetorical cloak of “support the troops.”

But the Democrats’ congressional leadership is already waffling, and some of their presidential candidates are joining Bush in rattling our sabers at Iran, hoping to appear commander-in-chiefish. Astonishingly, the Senate passed a resolution on September 26 by a 76-22 vote that endorses Bush’s confrontation with Tehran! The Kyl-Lieberman amendment buys into the Bushite myths about Iran, calls for the entire Iranian military to be designated “Global Terrorists” under a Bush executive order, and states that it should be U.S. policy to use all instruments of our national power (specifically including “military instruments”) to confront the “destabilizing influence” of Iran.

Democrats–especially Sen. Hillary Clinton–are now trying to deny that their vote for this resolution gave Bush a free pass to go after Iran, claiming that the resolution was only meant to apply to Iranian interference in Iraq. Intentions are nice, but Bush is not. The amendment’s language plainly allows plenty of wiggle room, and the Bushites have shown that they will interpret even an errant sneeze as permission to do whatever they want. Besides, why the hell would Democrats pass anything involving the expansion of this horrible war? Voters put them in charge of Congress to go the opposite way, not to buck up Bush with a new piece of warmongering that Sen. Jim Webb has called “Cheney’s fondest pipe dream.”

We the People have to be the leaders. More than ever, we have to get noisy. We can’t just wring our hands–there are things we can do:

Be brave. Be loud. Your country needs you. 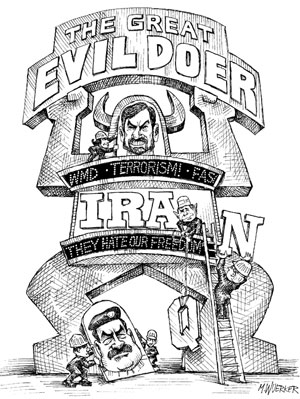