Half our tax dollars feed the American war machine

As early-20th-century humorist Kin Hubbard noted, “The less a statesman amounts to, the more he loves the flag.” Beware, then, of Bush, Cheney, Ashcroft, Rumsfeld & Co., for they have turned flag-waving into performance art, transforming the presidency into a medicine show of hyperbolic Yankee Doodle Dandyism—with George W. as George M. Cohan. Bush even used his annual colonoscopy last month as a media event to portray himself in patriotic-warrior mode. He convened a White House press briefing and solemnly told us that “because we’re at war,” he was invoking the 25th Amendment to transfer power to Dick Cheney for a couple of hours, letting the veep play president while he underwent the procedure. The hearts of the multitudes undoubtedly swelled with pride, knowing that the president was a patriot to the core . . . or at least the colon.”

Everything that this bunch does is hyped in the name of patriotism-in-a-time-of-war. Never has so much bunting been used to cover up so many bad ideas. Among the most nefarious examples is the 2003 Bush budget, published as a humongous book that they literally and shamelessly covered front and back with slick photos of a rippling red, white, and blue American flag. Between the covers, however, is a decidedly unpatriotic budgetary blueprint for transmuting America’s democratic ambitions into a militaristic, autocratic, plutocratic society. Cartoonist Kevin Siers of the Charlotte Observer got it right in a one-panel cartoon showing W. with his left hand holding his flag-draped budget and his right hand over his heart as he beams at a boy who is dutifully reciting a Bush-revised pledge: “I pledge allegiance to the budget of the United States of America and to the defense build-up for which it stands, one nation, under-funded, class divisible, with security and tax cuts for the rich.” Presidential budgets are always sleights of hand, pretending that less is more and vice versa, but this one is dangerously deceptive, intentionally low-balling the startling degree to which the Bushites seek to militarize federal spending. As ammunition for agitation, the Lowdown takes apart some of their numbers for you in this issue, revealing a very different picture of national priorities than the propagandists want you to have.

The official White House budget offers a simplistic, budgeting-for-morons pie chart that slices federal spending into a few easy-to-digest slices. They title this “How Will the Federal Government Spend Your Tax Dollar in 2003?” We title it “The Lie.” The key number is the one they put on national defense: 17 cents. Gosh, a casual observer might think, we’ve got a mighty military machine with all of those zap-’em-dead razzle-dazzle missiles they show us on CNN, plus we can send troops hither, thither and yon to eradicate evil-doers from the face of the earth forever—and it only costs us 17 cents out of our tax dollar? That leaves 73 cents for other needs. Bargain, dude! Hardly. Bush and his bean-counters have pulled two simple but huge tricks with this chart. First, they continue the flim-flam of mixing national trust-fund spending with the money that Washington allocates each year through the general budget. Payouts that Americans get from Social Security, Medicare, and other national trust funds are not subject to the budgeting choices of the president and Congress. Monthly Social Security benefits, for example, are already committed to be paid to retired Americans, and it’s sheer deceit to pretend that this is money that Washington appropriates annually. These trust-fund payments are financed by their own taxes, which are taken out of our payroll checks. It’s a separate system. The real budget—the annual operating budget that Bush and the Congress are free to divvy up each year among various federal programs—comes mostly from our income taxes. But beginning in the 1960s, when a huge percentage of this budget began to be siphoned into the war machine for the Vietnam conflict, the White House created the fiction of the “unified budget”—a dishonest ploy that lumps our trust-fund payouts with the pot of income-tax money over which Washington actually has spending discretion. By engaging in this statistical muddling, the pols artificially bloat the size of the pie, making it appear that they parcel out more money each year than they actually do. The result is—hocus pocus!—to make the military’s gluttonous share of the real budget seem smaller than it actually is. If we simply remove the artificial bloat of the trust-fund payments from the phony unified budget, we get a more honest picture in which Washington’s annual appropriation of our tax dollar to the military machine is not a mere 17 cents, but 31 cents.

Thanks to a second scam in Bush’s dandy little pie chart—hiding the pea under assorted shells—military spending is not encompassed just by the national-defense category: . The War Resisters League calculates that half of the budgets of both NASA and the Federal Emergency Management Agency goes to military functions, including military reconnaissance and civil defense. . While Paul O’Neill, Jesse Helms and that ilk squawk endlessly about the sliver of federal spending that goes for foreign aid (about a penny of each tax dollar), what goes unmentioned is that more than a third of foreign aid goes not for humanitarian or economic assistance, but straight into military and police operations abroad—and the two largest recipients of our aid, Israel and Egypt, get three-fourths of theirs for military purposes. . The FBI’s $4-billion-plus budget has been switched by Attorney General Ashcroft and Director Mueller from focusing on domestic crime-fighting to focusing on Bush’s interminable war on international terrorism, including imprisoning thousands of people without charges and trying suspects in unconstitutional military tribunals. . The infamous Drug War, a $19-billion-a-year program ostensibly intended to stop drug use here, increasingly is being converted into a military operation in such places as Colombia, Peru, and Venezuela to prop up economic elites. . We are still paying tens of billions of dollars each year for past militarism, both in terms of former soldiers (military retirement and veterans’ benefits) and in terms of interest paid on the national debt, more than half of which is derived from past military buildups. . The Department of Energy’s budget covers the maintenance of our nuclear-weapons stockpiles and the enormous cost of nuclear-weapons dumps. . And now comes “The Thing,” Bush’s lumbering new bureaucratic behemoth called the Department of Homeland Security, which will amass 22 agencies (from hoof-and-mouth inspectors to Secret Service agents to the Coast Guard) into a domestic-security detail that’ll suck up at least $38 billion more for militaristic purposes. By the way, Bush wants this awesome new federal authority to be exempt from both the Freedom of Information Act and the Whistleblowers Act. The bulk of this spending is a transfer of wealth from ordinary taxpayers to major corporations that have become welfare-dependent on military largesse. These special citizens maintain hordes of lobbyists to assure that, no matter what else the country might need, the war machine is fed first and most. A staggering amount of this is sheer waste. The Pentagon’s own inspector general, for example, recently conceded that the Defense Department cannot account for 25% of the funds it spends. It is unable to account for $2.3 trillion in transactions. It was reported at a Senate hearing that $13 billion handed out to weapons contractors between 1985 and 1995 was “lost”—yes, gone missing! Yet Washington is throwing even more of our tax dollars down this hole. Bush and Rumsfeld once talked the language of smaller government, saying that they would only push for necessary new weaponry. But after September 11, they said: “Oh, the hell with that, now we can have it all!” So in their budget is such gross waste as $2 billion for Boeing’s technologically challenged V-22 Osprey tilt-rotor aircraft that keeps crashing, having already killed 23 Marines in test flights; $3.5 billion for Lockheed’s F-35 Joint Strike Fighter that can’t fly the long sorties to reach landlocked countries like Afghanistan; another billion bucks for Boeing’s Comanche helicopters, an unnecessary aircraft that’s already saddled taxpayers with huge cost overruns; a half billion for United Defense’s Crusader artillery system, a 42-ton mobile cannon that’s too slow for today’s warfare, more than twice as heavy as the Army says is feasible for field use, and that even Rumsfeld doesn’t want; and $9.3 billion more for the embarrassing but continuing Star Wars boondoggle (see Lowdown, March 2001). 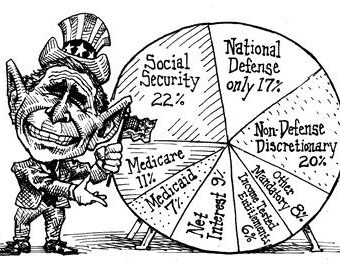