Oklahomans have been socked with a surprise from their supposedly conservative state officials.

Thousands of Sooners have put solar panels on their homes to save on energy costs and reduce fossil-fuel pollution, and when their systems generate excess electricity, they can feed it back into the energy grid, earning credit on their monthly bills. To reward such socially beneficial innovation, the state’s “conservative” government has now slapped a new fee–actually, a tax–on the energy bills of those who convert to being grid sup­pliers.

But the new tax was not from “nowhere.” It came from a secretive corporate front group called ALEC, the American Legislative Exchange Council. With millions of dollars in backing from the Koch brothers, utilities, and dirty-energy interests, ALEC has been peddling a cookie-cutter bill from state to state. It aims to deter homeowners from switching to solar by taxing the energy they produce.

Oklahoma Gov. Mary Fallin, who was in on this sneak attack from the start, had her ego stroked by the group last year. ALEC presented its “Thomas Jefferson Freedom Award” to Fallin for her “record of advancing… free markets… and individual liberty.”

Now we know what the Koch-ALEC complex means by “free markets” and “liberty.” They mean that corporate interests should be free to stifle our individual liberty. Thomas Jefferson would be ashamed to have his name attached to this cabal. 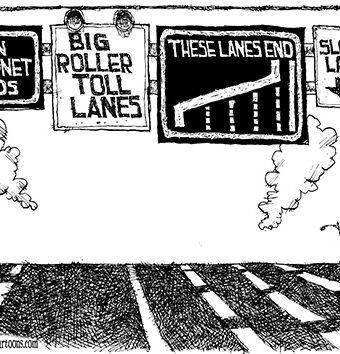