The fanciful notion that a corporation is a “person” and is thus imbued with fundamental constitutional rights stems from–get this–a mistake.

It happened in 1886, when the Supreme Court considered an obscure tax case, Santa Clara County v. Southern Pacific Railroad. At that time, the robber barons were flexing their political muscles, and their corporate lawyers were trying to convince Congress, legislatures, the courts–anybody–that the 14th Amendment (ratified in 1868 to give equal protection of the law to former slaves) also applied to corporations. The claim was that this amendment miraculously transformed the corporate structure into a person.

It was, of course, hokum, and the lawyers were getting nowhere with their claim. Still, in the Santa Clara case, railroad attorneys tried to get the high court to rule for corporate personhood. The justices, however, deliberately did not do so–nor did they even discuss the matter. As Chief Justice Morrison Waite later put it, “We avoided meeting the Constitutional questions.”

However, J.C. Bancroft Davis, a court reporter for a private publisher of legal documents, made The Big Mistake when he wrote a summary of the case. His opening sentence wrongly declared, “The defendant Corporations are persons within the intent of the clause in Section 1 of the Fourteenth Amendment…”

That’s it. Today’s grandiose claims of personhood for corporations are not grounded in the actual precedent of Santa Clara or in any declaration by Congress–but only in a mistake made by a clerk writing a case summary.

Flimsy as it is, Davis’ erroneous statement was seized upon by corporate attorneys, and before long even the Court was asserting it as the law of the land. And now, Roberts et al. would extend the mistake to corporate spending on elections. 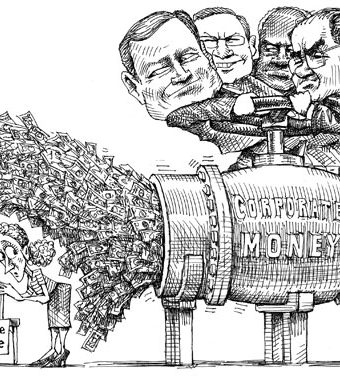