The campaign for the Trans-Pacific Partnership is being engineered by the US Business Coalition for TPP, a who’s who of corporate powers that will directly profit from the deal. To make their case on Capitol Hill, members of USBCTPP (pronounced “tthhbblltt”) visited lawmakers and handed out packets of very persuasive “talking points”–a.k.a. bundles of campaign cash.

In just the past year and a half, as more and more Congressional attention focused on TPP and “fast track” moved to a vote, this exclusive club of global corporatists shelled out at least $658 million in the 2014 election cycle alone to our senators and reps, not counting millions more in untraceable “dark money” donations. 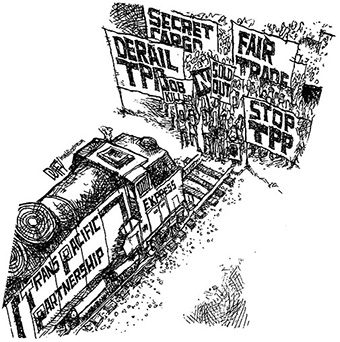