When asked by an anthropologist what the Indians called America before the white man came, an Indian said simply, ‘Ours.’ — VINE DELORIA,JR., Sioux scholar, activist, and author of Custer Died for Your Sins: An Indian Manifesto (1969).
In years past, Hollywood produced many awful Cowboy & Indian movies depicting the Great White Father’s heroic conquest of the Old West. In bad movies (and bad history alike), the Native American ceremonial pipe figured prominently as symbol of defeat–typically in a cliched scene of subdued chieftains signing a treaty of surrender and passing around a “peace pipe” in a sorrowful gesture to seal the raw deal. The reality is that the communal smoking of a ceremonial pipe, often filled with tobacco, is a centuries-old tradition rich in spiritual meaning for many Native people who see it as an eternal channel through which tribes seek metaphysical strength, courage and endurance. The ceremonial pipe both shapes and conveys Native people’s living history, a story that’s perpetually being written.

Indeed, a dramatic new chapter is unfolding this year in a volatile confrontation on a remote stretch of the Northern Plains in rural North Dakota. It’s a “Battle of Two Pipes,” pitting the cultural power symbolized by the Native American pipe against the bruising financial power of a giant pipeline.

It is an epic clash of two discordant cultures–one with a guiding ethic of harmony between people and nature, the other driven by an ethos that encourages the exploitation of both. Yet, for months, our clueless media–corporations with the skill to rivet millions to the NFL, to Cliven Bundy’s silly land grab, and of course, to all things Trump–gave this timeless match-up little coverage.

THE BACKSTORY. In 2014 ETP, a Texas oil behemoth, went public with its scheme to build a massive pipeline from the fracking wells of the Bakken oil field in northwest North Dakota. How massive? ETP’s 30-inch-wide Dakota Access Pipeline (DAPL) would cut a 1,172-mile-long scar diagonally through the hearts of North Dakota, South Dakota, Iowa, and Illinois.

If ETP’s $3.8 billion line is completed, it would carry 570,000 barrels of oil a day through most of the four states’ watersheds and wildlife habitats; it would transit hundreds of farms and ranches and make 200 river crossings. All the water and land in its path would be endangered, for one unpleasant fact about pipelines is that they regularly leak, sometimes rupture, and can blow up (an especially relevant concern with fracked Bakken oil, which is not only some of the dirtiest crude on the planet, but is also exceptionally flammable and “more prone to explosions than earlier thought,” according to U.S. officials).

This danger is real. ETP has a history of voraciously pursuing profit at the expense of the environment, leaving messes for lawyers and PR flacks to cover over. As the National Lawyers Guild documented, the pipeline conglomerate has “a long history of violations of environmental laws, including pending lawsuits by” New Jersey, Vermont, and Pennsylvania, and Puerto Rico, “as well as citations for releases of hazardous materials from its pipelines and facilities in Ohio, Oklahoma, Louisiana, Missouri, Texas, Pennsylvania, and Hawaii.” And then there’s the climate damage: Oil Change International estimates that every year DAPL’s greenhouse gas emissions will equal those of 30 coal-burning power plants. 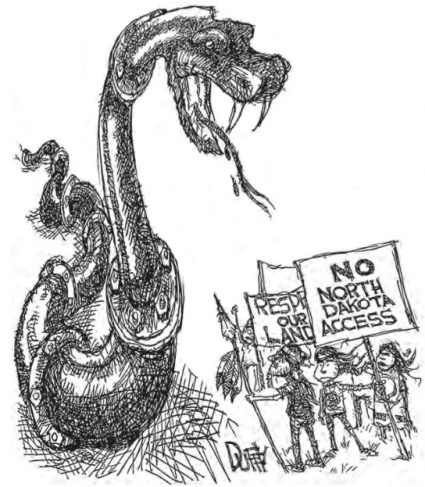 THE ANTIHERO. Enter stage right: Kelcy Warren, honcho of Energy Transfer Partners and its parent financial outfit, Energy Transfer Equity, a fossil fuel colossus that also owns Sunoco oil and Southern Union gas. How does Warren’s company–with such an unkempt environmental record, plus national notoriety for bulldozing over opposition from outraged landowners and communities–regularly get state and federal regulatory authorities to clear the path for them? The old-fashioned way: Warren, ranked by Forbes as the 86th richest American, pumps big bucks into the campaign coffers of key politicos, drawing from corporate funds as well as his personal $5.45 billion fortune. Consider Warren’s recent Texas play. For the last two years, ETP has laid siege to one of the Lone Star State’s most spectacular and environmentally unique regions–the mountainous, desert ranch country of the Big Bend, which includes historic sites and artifacts of Comanche, Mescalero, Chiso, and other indigenous cultures dating back more than 14,000 years. Despite adamant local protests, ETP is presently ripping the land with the 148-mile-long, 42-inch diameter “Trans-Pecos Pipeline” that will export gas from West Texas to Mexico. “We feel like we’ve been invaded,” said one member of the local citizens group, Defend Big Bend.

They have been–with the Obama administration’s approval and the collusion of their own state officials, who blithely handed the sledgehammer of the state’s power of eminent domain to the private corporation, letting it take people’s land for its own profit. Why? Follow the money. Since 2013, CEO Warren has become Texas Gov. Greg Abbott’s No. 4 donor by personally bestowing $700,000 on the governor’s campaigns. And then there’s Gov. Rick Perry, another obsequious Warren helpmate. In his second failed run for president, Gov. “Oops,” through his super PAC, was backed by a $6 million donation from the pipeline baron! Last November, Warren’s coziness with Abbott came full circle when the governor awarded the pipeliner a seat on the prestigious Texas Parks and Wildlife Commission, ironically making Warren an environmental “steward” of state parks in the area he is presently despoiling. And wait, there’s more: Guess who Warren placed on ETP’s board of directors last year? Climate change-denier Rick Perry!

ENERGY TRANSFER PARTNERS is the lead actor in the pipeline assault on the Standing Rock Sioux Tribe, but it’s not alone. [read more]
THE PLOT. Used to getting his way (and literally getting lucrative rights-of-way), Warren assumed he’d get rubber-stamp approval for his Dakota Access route. Sure, there was a noisy coalition of Iowa farmers and environmentalists making a fuss, but ETP had a passel of lobbyists and lawyers working to win and wield the eminent domain sledgehammer in all four states.

In addition, ETP’s Washington lobbyists persuaded the industry-friendly “regulators” of the US Army Corps of Engineers to fast track the start of construction through a backdoor provision called “Permit No. 12.” This maneuver let DAPL escape some essential federal environmental reviews by unilaterally defining its pipeline as a series of small construction sites rather than one unified conduit snaking through four states. Along the way, the pipeline would run just outside of Cannon Ball, along the northern edge of the Standing Rock Reservation. Corporate routers likely assumed that the reservation’s 8,500 mostly impoverished Lakota Sioux had no clout, so there was no need to get their permission, especially since the pipeline wouldn’t actually be on tribal land. Bad assumption.

THE PLOT THICKENS. Warren was so obtuse that he didn’t realize (or care) that the tribe’s deep connection to the area adjacent to Standing Rock doesn’t stop at the reservation’s arbitrary boundaries–the DAPL project would gouge right through ancestral lands and burial grounds. (To sense the people’s outrage, imagine reaction to a corporation running a pipeline through Arlington National Cemetery.)

In addition to ETP’s cultural and religious callousness, its pipeline risks economic and environmental disaster. The corporation plans to bury its oil pipeline under the Missouri, beneath the Lakota people’s main source of water for drinking, bathing, irrigation, fishing, and recreation. As a Lakota phrase says, Mni wiconi–water is life–and one rupture could be ruinous. [Infuriating footnote: In an act of flagrant racial injustice, DAPL had abandoned its original siting, 30 miles upstream, in part to allay concerns by people in Bismarck that oil might contaminate their water.]

In April, the Standing Rock Sioux made their stand. Some 35 tribal leaders established Sacred Stone Camp, just off the reservation and near where ETP’s engineers intend to tunnel under the river. Would anyone even notice a small protest way out in the hinterland? Not at first. But after the tribe’s social media network spread word of the Cannon Ball rebellion, a phenomenal, spontaneous migration of Native people–not coordinated by anyone– began arriving at the camp to stand in solidarity against ETP.

They came in cars, campers, and caravans–some even paddled down the Missouri in traditional canoes. There were Penobscot from Maine, Anishinabek from Michigan, Ponca Nation people from Oklahoma, Menominee from Wisconsin, the Hoopa Valley Tribe from California, Paiutes from Oregon, and many others. By August, representatives of 280 Native American tribes had joined, making this the largest, most diverse, cross-tribal action in US history. Plus delegations came from Canada, Mexico, Peru, and New Zealand.

LIGHTS, CAMERA, ACTION! Sacred Stone Camp pulsated with a sense of rediscovered power, ancestral duty, and indigenous culture. Many wore tribal attire, some with feathered headdresses; their decorated teepees and tents were scattered throughout; the glow and smoke of campfires permeated the night; a myriad of drums made the hills and the entire riverbank throb with energy; ancestral songs, chants, and whoops electrified the atmosphere; and of course, ceremonial pipes were smoked. Not only were spirits high, but the extraordinary unity of so many diverse Native cultures–boldly gathering in a show of strength and shouting “NO” to yet another arrogant act of gross injustice–seemed to herald a reawakening.

Not since Custer has an Anglo been as surprised as Kelcy Warren by a powerful force of Indians thwarting his ambition.

As the protest gained strength–and was joined by thousands of progressives and covered by independent media–ETP and its political minions responded predictably: with panic, whining, lies, and brute force.

September 9 was a day of emotional whiplash. First, sadness: A federal district judge ruled against the Standing Rock Tribe’s legal claim that the Army Corps of Engineers did not properly consult them before approving ETP’s permit. But then, elation: Three federal departments (Justice, Interior, and the Army) issued a stunning joint statement declaring that (1) “[the] Army will not authorize constructing [DAPL] … until it can determine whether it will need to reconsider any of its previous decisions regarding the site under the National Environmental Policy Act”; (2) the departments are asking ETP to “voluntarily pause all construction activity”; and (3) “this case has highlighted the need for a serious discussion on whether there should be nationwide reform with respect to considering tribes’ views on these types of infrastructure projects.”

Victory! Yes. But the fight isn’t over. Warren quickly zapped out a corporate memo to “reiterate our commitment” to the DAPL route through sacred tribal lands, under the Missouri River, and over the people’s rights. Count on him to squeeze key congressional Republicans he has funded, demanding they block Washington’s “interference” with his profiteering.

Noting that ETP “has proven time and time again that their bottom line is money,” the Standing Rock tribe’s chair, Dave Archambault, made clear that his people are committed to the higher values of “our lands, people, water, and sacred sites” and to the common good of their grandchildren and their grandchildren–generations into the future. The Standing Rock Sioux, Archambault affirmed, are in it for the long haul: “Our fight isn’t over until there is permanent protection of our people and resources from the pipeline. We won’t stop until they stop.”

BATTLES BETWEEN the Powers That Be and the People are popping up everywhere, and this is a Big One! Here are several things you can do to stand with the people at Standing Rock.

The folks leading the charge against ETP’s pipeline are in urgent need of legal help and supplies. At sacredstonecamp.org–you can take action, donate to their legal defense, or donate supplies. You can also learn more and donate at standingrock.org. Young people at Standing Rock have started ReZpect Our Water. To learn more about their movement and sign their petition, check out rezpectourwater.com.