But the real issues weren’t ever on the table

The quadrennial presidential horse race is on, and the media establishment has unleashed its army of pundits, pollsters, powdered anchors, analysts, chart-makers, gossips, make-up artists, set designers and others to drum up the drama, telling us peasants over and over again how exciting, how momentous, how democratic it all is.

From now through November 7, the gaudy trappings of democracy will be on full media display bunting everywhere, cheering partisans artfully arranged for the cameras at every campaign stop, polls, a blitzkrieg of caucuses and primaries, polls, the nominating conventions with balloons and confetti, polls, a cacophony of campaign ads, more polls, televised debates (no third parties, please), tracking polls, theme music for staged candidate speeches, an overdose of punditry, last-minute polls, and at long last, Election Day itself, interrupted throughout by exit polls and more punditry. The media will then glorify the winner and the process: “The people have spoken-democracy in action.”

But democracy assumes choice and participation. The truth is that even before anyone casts a ballot, IT’S ALREADY OVER! No matter which of the Republicrats finally ends up in the Oval Office, the policies of our government will not change on the kitchen-table issues that most affect Americans. Already decided is the crucial question of whom government will serve, assuring a continuation of the status quo on middle-class income loss, global trade scams, weak-kneed environmental gradualism, mega-mergers, biotech insanity, campaign finance corruption, et cetera.

This is because the real election was held last year in the corporate suites and living rooms of the rich, where 0.05% of “the people” voted. These are the CEOs, lobbyists, and investors who bankrolled BushGoreBradleyMcCain and any other wannabe with a faint chance of winning a presidential nomination. These privileged few vetted the prospective candidates, making certain that each of them can be trusted to govern in the corporate interest.

Candidates that don’t pass muster don’t get money. Period. The result is that in 1999 the moneyed interests chose our choices for 2000. For example, Goldman Sachs and its executives have put thousands and thousands of dollars into Al Gore’s campaign. And into George Bush’s. And into John McCain’s. And into Bill Bradley’s. No matter who wins, Goldman Sachs has a friend in the White House-and probably will get at least one of its own executives appointed to a key administrative position, the better to keep an eye on the company’s political investment.

But Goldman Sachs and the other plutocrats also win because their donations ensure that none of the. contenders will be making trouble in the campaign unauthorized positions that could spark a bothersome debate about the plutocracy itself. By purchasing candidates wholesale, they guarantee a campaign that is much ado about nothing, with the debate restricted to social issues like abortion, hokey issues like who can downsize government the most (while lavishing ever-more- wasteful spending on the Pentagon, the drug war, and corporate welfare), local issues like zoning and traffic jams, and non-issues like which candidate can be the most pious about never ever even thinking about doing cigar tricks with White House interns.

Once there were Democrats

What a shame that our nation’s politics is so corrupted and worth- less these days. America really could have used an honest pulse-taking in 2000. All hoopla aside, the turning of a century, let alone a millennium, is a signiflcant, attention- focusing opportunity to have a thorough public conversation—maybe even a bit of national contemplation-about our people’s progress and our national direction. I realize I’m teetering on the brink of squishy idealism here, but golly Pollyanna, if our political System was not totally twisted, this election could have been an opportunity for the parties, the candidates, and the media to come out to us plebeians, listen to the reality of regular people’s situ- ations, debate a plethora of unconventional (i.e., noncorporate) ideas, and generally conduct a kind of two-year, coast-to-coast political Chatauqua-not quite a plebiscite, but at least a ‘whaddaya think’ consultation on America’s course for the 21st century. Instead, 2000 will be like ’92 and ’96-one more money-soaked, corporate-driven, issue-avoiding, made-for-television snoozen

Politics should matter. I know that’s a radical thought in this age of carefully calculated political centrism, when the money backers demand candidates who are inoffensive, and when the consultants that direct every campaign insist that the way to win is not to lose.

There actually was a time when a Democratic presidential nominee was a species discernably different from the Republican, when the Democrat was not skittish about kicking corporate ass, and when the Democratic Party didn’t need a consulting flrm to figure out what it was for …and what it was against. This is a party with a history of siding unequivocally with the common people against the bastards, a party that once even voted by a four-to-one margin at its national convention to disown any political candidate within its own ranks “who is the representative of or under obligation to J. Pierpont Morgan …or any other member of the privilege-hunting and favor-seeking class.”

Today, the Democratic Party itself, as well as its top candidates, boasts of being under obligation to Morgan—or, more specifically, to J.P. Morgan Inc. and Morgan Stanley, the two Wall Street firms spawned by old J. Pierpont. Democrats go shamelessly and often into these houses of greed, obsequiously seeking campaign funds in a straight-up exchange for their populist principles and constituency. So far, Al Gore has bagged more than $17,000 just from the two Morgan firms, Bill Bradley has been blessed with more than $111,000, and the Democratic Party is obligated to the tune of more than $75,000.

This is an appalling perversion of everything that is important about the Democratic Party. The party’s only reason f6r existence is to serve those who want to challenge the haughty rule of Morgan Inc. and the rest of the privilege-hunting, favor-seeking class. It’s fine for J.P. Morgan to own one party, but if the Democrats, too, are the private property of Wall Street, where does this leave the rest of us?

Now comes Election 2000, a space odyssey so far out that even Stanley Kubrick would have had a hard time imagining it. Fueled by an unprecedented level of corrupting cash, the political system has disconnected itself from the body politic.

The result is not so much an election process as it is a burlesque. Last year, as part of the build-up for his presidential run, Bush’s handlers arranged a speech from a stage festooned with flags and ceremonial banners. In a pitch to politically significant Latino voters, one of the banners proclaimed “Juntos Podemos”—Together We Can. But, the Houston Chronicle reported it as “Juntos Pedemos”—Together We Fart. For many Americans, that’s a more accurate summation of what today’s political system delivers.

“I won’t vote,” Manuel Gonzalez told the New York Times. A superintendent in the Bronx, Manuel speaks for the multitudes when he says, “Doesn’t count anyway—the politicians do what they like. It’s not a people’s country. It’s a money country.”

What kind of “election” is it that doesn’t address the needs and aspirations of the millions and millions of Manuels who, after all, are America? What kind of democracy is it that can be satisfied—even glad—that Manuel won’t vote?

Indeed, despite there being an open presidential seat, despite the control of Congress being up for- grabs, despite this being the first election of the third millennium- more Americans watched last month’s Super Bowl than will show Up for Novemb6r’s national balloting.

We’re staring at an electoral train-wreck in the making, with the likelihood that less than half of the country’s voters will be Motivated to bother, and the pos- sibility that this year will produce a lower national turnout than the scintillating Clinton-Dole match up of 1996 (third lowest in history), the thrilling Coolidge-Davis contest of 1924 (second lowest), and even the clunker of 1824 (lowest ever), when John Quincy Adams stumbled into the White House.

The noted Political theorist, Dan Quayle, has commented on the phenomenon of the disappearing voter: “A low voter turnout is an indication of fewer people going to the polls.” Thank you, Professor Quayle. (I’m told that if you stand close enough to Dan’s head, you can hear the ocean.)

Unfortunately, he’s not that much more whacked out than the rest of the establishment, which continues to stiff America’s work day Majority economically—and politically, yet blithely assumes there will be no price to pay. They forget that our country’s history is one of rebellion, often explosive, by people shut out of the system.

If today’s shut-out majority is not to turn ugly, a new politics has to be forged that gives them a real say in the way things are being run. Ordinary folks have to matter again.

But the bleak Political landscape won’t change until you and I change it. In the longer run, this means taking on the arduous—though ultimately rewarding— tasks of grassroots party building.

Much easier and More immediate, however, is to use this year’s ballots to begin expressing ourselves. in my view, there’s no excuse for not going to the polls, because the ballot is much more than BushGoreBradleyMcCain and more than any presidential race. Even turning in an empty ballot tells the Powers That Be that you were there and that you deliberately and Officially rejected them.

Plus it’s a rare ballot that has no choice at all. There are third-party candidates and insurgent Democrats, and there’s always the write-in opportunity. Refusing to vote doesn’t count at all, but using the ballot creatively does get counted and not only registers a Protest, but in some well—organized third- party races (New Party, Greens, Libertarians, Reform Party) people are already getting elected.

Election 2000 is also going to offer a watershed opportunity for developing a genuine, populist politics. I believe Ralph Nader will run for president—and run aggressively—on the Green Party ticket. I have talked with him, and if he does run, he’ll do it right, He’ll raise the necessary money, he’s already assembling a top-notch staff, he’s thought through a sound strategy, he’ll campaign hard in every state-and, of course, he’ll hit hard and give- lem-hell on the crucial issues of corporate greed and citizen democracy.

Building on the coalition, issues, and raw political energy we saw Come to the surface in Seattle, as well as on the dynamic citizen activism that exists at the grassroots level all across the country, Ralph’s run has the potential to galvanize a national movement and give it a solid political structure for the future. In addition to raising the kitchen—table issues that the two-party duopoly avoids, a Nader campaign can broaden the message, public image, and base of the Green Party, qualify it for ballot status in almost every state, and reach the 5% threshold of votes next November that will qualify it for millions of dollars in federal party-building funds.

Nader for President is not the answer to our political woes, but in conjunction with a long-term, grassroots organizing strategy, it can get us beyond the political doldrums we’ve been in for more than two decades. We can either continue to wait for the answer to come riding over yon hill …or we can get moving. I think the time is right. 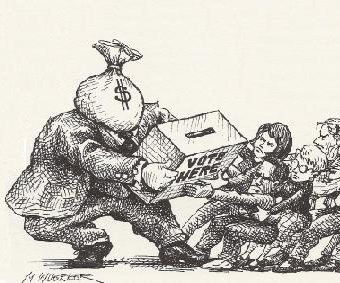