On Feb. 7, Barack Obama jettisoned his principled opposition to the Court’s elevation of Big Money over people by okaying the creation of his own SuperPAC, Priorities USA Action. His rationale was that he couldn’t “unilaterally disarm” in the face of the GOP’s nuclear-level SuperPAC attack. However, Obama’s fund is a popgun, with only $9 million donated so far and very few Democratic donors able or willing to compete with the free-spending corporate and financial powers stockpiling hundreds of millions of dollars in their 2012 arsenal.

Meanwhile, just by creating his SuperPAC, Obama unilaterally disarmed on the moral principle that these entities are political abominations that must be eliminated. He surrendered the high ground on an issue that would’ve been immensely more valuable to him than the relative dab of money he will get. 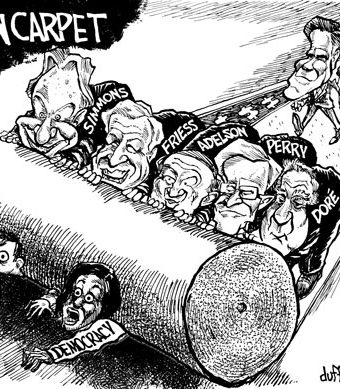