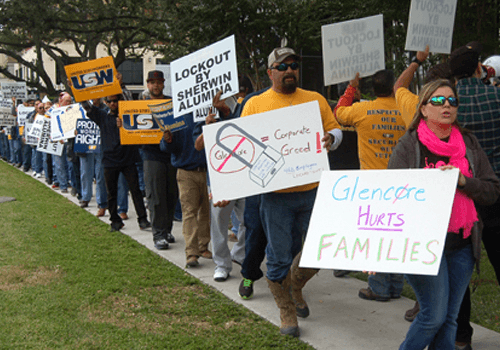 IN A SONG ABOUT OUTLAWS, Woody Guthrie noted: “Some’ll rob you with a six-gun, some with a fountain pen.” But that doesn’t mean fountain pen robberies are easy. Au contraire, amigo, as pulled off by today’s corporate thieves, they require convoluted schemes, a web of secret arrangements … and hearts throbbing with greed. For a textbook example of mass robbery by modern-day packers of high-powered fountain pens, let’s track the maneuvers of the Glencore Gang.

Since at least 2009, Glencore plotted against their recently acquired Texas subsidiary, Sherwin Alumina. They rigged the subsidiary’s corporate rules and compelled it to accept bad deals from Glencore and affiliated financial groups, thus weakening Sherwin to the point of insolvency. Then the gang shoved Sherwin into bankruptcy.

QUESTION: But why would Glencore buy an aluminum maker and then spend more than six years conspiring to bankrupt it?

ANSWER: The move would make business sense if Glencore intended to use bankruptcy laws to plunder Sherwin’s facilities and other assets, restart the plant as union-free, and jettison the debts owed to Sherwin’s unsecured creditors (including USW families who are owed millions of dollars in pensions, suppliers who’ve gone unpaid, and local people burdened with environmental damage caused by Sherwin/Glencore). According to the formal complaint that their creditors filed on March 21 in Sherwin’s bankruptcy case, Glencore’s machinations in this corporate mugging ranged from merely unethical to unconscionable:

As the Lowdown goes to press, a trial in bankruptcy court is scheduled for late April, and settlement discussions are heating up. Stay tuned! 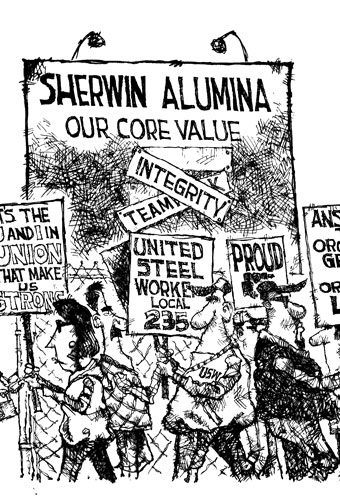