How .05% of Americans buy our elections

Only the gigolos of the gentry can run

How many pockets does a political candidate have? As many as it takes. In recent years, the tailors have been busy fashioning and sewing new pockets into the suits of presidential and congressional candidates so big donors are not limited to a straight-forward $1,000 donation per candidate as the law provides, but instead have a blessing of pockets where they can stuff cash and curry favor. There’s the old fashioned pocket for individual donors, though it’s been expanded to include a special child’s pocket, and there’s the good ol’ PAC pocket for corporate and union money. But now there’s also a huge pouchy pocket for stashing unlimited “soft money,” a leadership PAC pocket, a back pocket for tax-deductible contributions to a candidate’s foundation, a state PAC pocket, and . . . oh so many more. 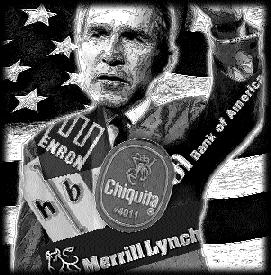 Add them all up and today’s candidates are wearing more pockets than suit, and there is no shortage of special interests willing to fill each one of them as full as possible. It’s all bribery.

The 2000 election promises to be a whopping buck-bath because this time both parties have a chance to win the White House, the House and the Senate. Presidential candidates raised a total of $103 million in hard money during the first half of the year. The Democratic Congressional Campaign Committee just reported that it collected $17 million, and the National Republican Congressional Committee has raised $20.6 million.

But if you’re out to raise $20?25 million, as Bill Bradley, Dan Quayle, John McCain, Lamar Alexander, and Elizabeth Dole are, or aiming for $50 million as Al Gore and George Bush are, then you’re not going to be a populist. Hell, you won’t even be a democrat.

Raising $25 million in a year’s time means hauling in $68,495 a day, every day of the year, counting Saturdays, Sundays, and the Fourth of July. This leaves you no time to be with the folks, raising issues, raising hope, and raising hell—which is what the 2000 race should be about. Instead, it means spending your time and focusing your message on a carefully culled constituency of about 150,000 extraordinarily rich Americans. This is about how many people there are (out of 270 million of us) who can and do give the big bucks to candidates.

The thought of having to telephone this breed day in and day out; of having to trudge door to door on Wall Street to woo them; of haunting their Martha Stewart- designed living rooms to charm endless gatherings of their divine friends has shoved lots of prospects out of the field. Senator John Kerry considered challenging Al Gore in the 2000 presidential primaries, but declined, saying, “My heart wants to talk about the issues I care about, but my head was telling me the 10 months I have to raise a huge amount of money is difficult.” New Jersey Senator Frank Lautenberg said the same thing when he announced he wouldn’t run for re- election. Senator John Glenn, announcing his own retirement, called fund-raising “a stinking, miserable way to lead your life.”

It’s a stinking, miserable way to choose a government, too! And it sure makes you wonder about the mind-set of those who do it. The cash chase demands and attracts candidates who are comfortable with, good at, and seem to enjoy prostituting themselves to the privileged and powerful. They are the gigolos of the gentry.

How to bend the rules

There are rules that limit campaign contributions, but there are thousands of loopholes to get around those pesky obstacles.

The easiest two-step around the limit is for a donor’s spouse to put in a $1,000 check, too, doubling the donor’s purchasing power. But ambitious contributors don’t stop there. Their children can be contributors, too, under the guiding hand of their politically-enthusiastic parents.

Still, this is peanuts in the big money game, so let’s take a step up to the “leadership PAC.” This is a money funnel engineered by Congressional Republicans, through which corporations and individuals can legally pour $5,000 at a time into the coffers of key lawmakers. Newt Gingrich had his GOPAC, Trent Lott has his New Republican Majority Fund, Republican Whip Tom DeLay has ROMP-PAC (Retain Our Majority Program), and even the 13 GOP managers of the Clinton impeachment have their own House Manager’s PAC. A good loophole gets around, and all the current presidential contenders have established leadership PACs.

(“PAC,” by the way, stands for Political Action Committee. These days, if you want political action, you have to pay for it.)

Still, even collecting money in $5,000 batches can be too slow and tiresome for some of today’s go-go candidates to bother with in their search for $20?50 million, so they sicced their green-eyeshade boys on the election laws once again to see if they could find still more ways around the rules and grab some really big money.

Leave it to Lamar Alexander—the former Tennessee governor, GOP cabinet member, and second-time presidential runner. After falling early and hard in the ’96 race, Alexander whined loudly that the $1,000 limit on individual contributions to candidates and the $5,000 limit on donations to his PAC had killed him. He had many fat cats in his political house, he said, and it was unfair that they couldn’t buy- in at a higher level. So Lamar created his own loophole: the “nonfederal account.” He set up a state PAC back home in Tennessee, where the law allows any person to give an unlimited amount to a candidate’s PAC. Now he can slide the money from his state sack directly into his federal sack, using the funds to cover travel, staff salaries, rent and other “overhead” costs associated with informing the public about issues. In just the first six months of 1998, he filled his state-based soft-money machine with nearly $2 million donated by only 61 people—an average of roughly $30,000 a pop. When Dan Quayle’s political director was told about Loophole Lamar’s fancy shell game, he exclaimed: “I didn’t know you could do that. I’m flabbergasted.” But he wasn’t repelled. Soon, Quayle had a state PAC of his own and was siphoning the money out of it into his federal PAC.

If you thought there were no more money tricks to be discovered, you forgot about Newt Gingrich. Like his nemesis Clinton, the Newtster was always looking for an edge, some new way to let corporate interests bring even more checks to his table. He pulled off the political equivalent of turning water into wine—he found a way to bring tax exempt contributions into politics.

Gingrich created the Progress and Freedom Foundation (PFF), organized for charitable and educational purposes under section 501(c)3 of the tax code and funded by such “charitable and educational” concerns as AT&T, Federal Express, GE, IBM, Lockheed Martin, Seagram, BellSouth, Coca-Cola, Ford, and Johnson & Johnson. Making donations to Newt’s foundation was a painless way for corporations to curry favor with him for their legislative agendas, since every dime could be deducted from their income tax. What a deal!

The foundation itself was a long way from being a philanthropic cause, unless you count Newt as a charity case. Not only did the foundation do work directly tied to Republican campaigns and legislation, but it also made little pretense of being anything more than an arm of Newt’s political action committee. The PAC and the PFF shared staff, offices, agendas, funders . . . and, of course, Newt.

Even though the House ruled that its own Speaker was using tax-exempt “educational” funds for partisan purposes and fined Gingrich $300,000, the IRS ruled Newt’s foundation never pushed candidates by name and so hadn’t broken the law. By validating this use of tax-exempt funds, the IRS has opened new floodgates.

Tax law professor Fran Hill, an expert on charitable funds and politics, told Roll Call: “Every candidate for public office ought to immediately incorporate a 501(c)3 charitable organization into his or her campaign finance structure. And they should run all of their research activities and all of their dissemination of ideas through the (c)3.” Rep. Nancy Pelosi, astounded by the IRS’s flip flop, said, “Now you would be a fool not to do it.”

Who’s “giving” and does it work?

We pride ourselves in our one-person one-vote system, but when it comes to dollars, 96% of our people have zero vote—and the 4% who vote with their money break down this way:

Now, take a look at how the top soft money donors in the 1998 election fared: l Philip Morris and RJR Tobacco together contributed almost $2.5 million.

l Securities and investment firms contributed $8.5 million. Now, Clinton and the crop of presidential contenders say Social Security is “broke” and that they’ll “save” it by giving your hard-earned Social Security funds to private investors to manage—for a big fee!
What then must be done?

Even if we ban those soft money gifts like the campaign finance reform bills currently bottled-up in Congress suggest—how could we stop, say, the NRA from running million-dollar campaigns against gun control in states where gun controllers are candidates?

The reform-minded senators Russ Feingold and John McCain say we should restrict these so-called “issue ads,” paid for by interest groups or political parties, during the last two weeks of a campaign. That still requires someone to decide exactly what is an issue ad. How about an insurance company’s syrupy spot full of kids and moms and old veterans waving American flags—could that be banned from the tube for supporting candidates who want flag burners burned at the stake?

It’s hard to ban ads without offending the First Amendment protection of free speech. Which is why some states, instead of banning ads, try to level the playing field with “Clean Money” laws. Voters in Maine, Arizona, and Massachusetts have already passed initiatives to give tax-money to candidates who have proven public support and agree to spending limits. Vermont and Wisconsin have Clean Money legislation in the pipeline.

Another level-the-playing-field idea is to give every real candidate free air time on TV and radio, since the airwaves are, or ought to be, public property.

But does that mean 25 candidates jawboning on community-access Channel 127? Or would Monday Night Football take a time-out so Bill Bradley, Al Gore, and George W. could argue with each other over which Wall Street firm to give our Social Security money to?

We’d like to mandate full and forceful disclosure—make every politician or candidate own up to where every dollar of their money’s coming from. Maybe we could even make ’em wear their sponsors’ logos like NASCAR drivers do, as in the illustrations in this issue.