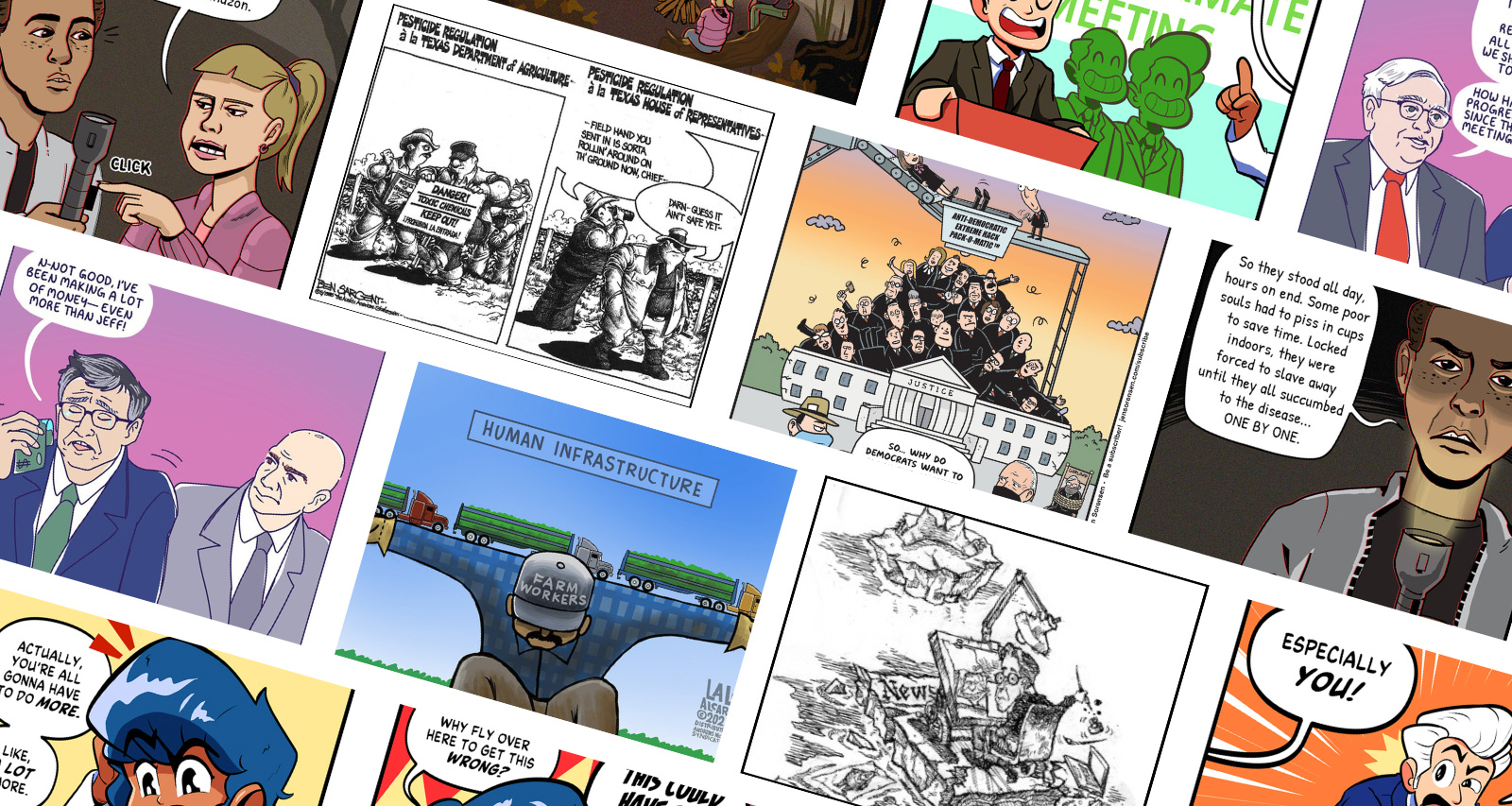 As a tyke, I never dreamed of growing up to be a political activist/ commentator, but here I am, and it’s worked out pretty well for me. I’ve been lucky enough to have a voice in public matters and eke out a modest living running my mouth as an independent populist agitator. Still, I have to confess to the sin of Job Envy. Not in the sense of being resentful, but regretful about my own inability to lift the trade of journalistic commentary to the heights attained by a small, feisty collection of unique public opinionators: Political cartoonists.

In framing issues and rallying people to think and act, these journalists have an unfair advantage over us mere word crafters. They can literally draw a picture to make their point! Thus, they reach masses of people viscerally as well as cerebrally. And visceral usually outpunches cerebral. Editorial cartooning is a profession made up largely of progressive mavericks who enter the social-political-cultural fray with an abundance of anti-establishment audacity, an eye for irony, a fondness for the underdog, an ability to laugh at absurdity…plus artistic talent.

A classic example of this irreverent type is Art Young, who a century ago was part of the freewheeling staff of an iconoclastic magazine, The Masses. In 1917, at the onset of US entry into World War I, he produced a bombshell of a cartoon titled “Having Their Fling.” It showed four war-mongering characters–a capitalist, a newspaper editor, a politician, and a minister –dancing ecstatically to the drums of war, conducted by Beelzebub himself. The mighty US government (led by Democrat Woodrow Wilson) hated the mockery and promptly dragged the little magazine into court, charging that its cartoons were undermining the war effort. The humorless federal prosecutor demanded that Young explain what he meant:

“Meant? …You have the picture in front of you.”

“What did you intend to do when you drew this picture, Mr. Young?”

“Intend to do? I intended to draw a picture.”

“Why, to make people think–make them laugh–to express my feelings.”

“Had you intended to obstruct recruiting and enlistments by such pictures?”

“There isn’t anything in there about recruiting and enlistment, is there? I don’t believe in war, that’s all, and I said so.”

A hung jury refused to convict, so our government convened a new jury, but that group of citizens also didn’t convict.

Victory! Yes, but bittersweet, for free speech actually isn’t free, especially for a small publication forced to mount a long-term court battle against the power of a government wielding the suffocating flag of war. The financial costs of defending itself–and American liberty–forced The Masses to shut down. But they couldn’t shut down Art Young, who kept drawing elsewhere.

Because cartooning is an expression of the human spirit that has been irrepressible since cave drawings, generation after generation of pen-and-ink champions of democracy like Young have blossomed. Moreover, the general public’s appreciation and demand for the cartoonist’s sharp-pointed honesty and satire have never flagged, even increasing whenever the artists come under public assault by autocrats, plutocrats, theocrats, cultists, racists, demagogs, screwballs, and assorted other censors.

It’s been my good fortune to get to know, work with, be inspired by, and benefit from many of these free spirits as I’ve hopscotched through a career as campaign organizer, editor, author, candidate, elected official, commentator, newsletter writer, and general anti-establishment imp. During my time as Texas agriculture commissioner, for example, our battle to restrain the poisonous power of the pesticide lobby was better advanced by the stinging pen of Austin’s Pulitzer-Prize winning cartooning genius, Ben Sargent, than by all of my own rhetorical harangues against the industry’s deadly abuses. And, as you Lowdowners know, the 20-plus years of monthly cover cartoons by Brian Duffy, Matt Wuerker, and Steve Brodner have elevated the impact of every issue. I know from experience that cartoonists matter.

As in the natural world, however, even the most beneficial creatures can be driven to extinction. And–yikes!–right before our own eyes, the invaluable species of kar-tōōn-us a-mer-i-kan-us is fast disappearing from view. There is nothing natural about this; it’s not the result of a declining talent pool, and it’s certainly not due to any lack of rich political fodder. Rather, the cartoonists’ media habitat is being destroyed.

Around the start of the 20th century, some 2,000 newspapers featured their own, full-time staff cartoonists to attract readers/subscribers. (The Lowdown’s own Brian Duffy notes that his one-time mainstay, the Des Moines Register, even ran its cartoonists’ art on the front page.) In just the last decade, though, there’s been a wholesale dumping of these artistic journalists, with even Pulitzer Prize winners unceremoniously dumped. Now, in the entire USA, only a couple dozen cartoonists are paid newspaper staffers.

What happened? Monopolization and Wall Street greed, that’s what.

As we detailed in June 2021, most US papers, including major metropolitan dailies, have been gobbled up by profiteering hedge fund hucksters with murky names like Alden Global Capital and SoftBank Group. They have merged, purged, plundered, shriveled, and shut down these essential local sources of news and democratic discourse. It’s not merely that these fast-buck owners neither know nor care about journalism, but also that they neither know nor care about attracting customers. They are money manipulators whose overriding interest is to cash out a paper’s financial assets and haul off the booty. Thus, they view cartoonists as a paycheck that can be easily diverted into their own pockets, dismissing the fact that enjoying good local cartoonists ranks as one of top reasons people give for buying the paper.

Thus, the combo of Wall Street greed and corporate stupidity threatens to do what the brute force of tyrants and other self-anointed censors has consistently failed to do: Stop them damn cartoons! Note that no one is crudely banning political cartoonists from producing any image they want. But the new monopolistic order of newspapering says artistic journalists can no longer expect to get a fair price for their product, much less a living. In short, they are free to create … for free. The Wall Street barons of local news are locking these journalists out of their primary marketplace, arbitrarily separating producers from the strong consumer demand that continues to exist for their work.

Want to take action? Scroll down for info on how!

This would be a total bummer of a story, except for one factor: Cartoonists themselves! These creative scamps, led by a whole new, diverse generation of artistic opinionators, keep scrambling back, insisting on having their say one way or another. For most of the last 150 years, cartooning in mainstream media has been the almost exclusive turf of white men, but now the voices of women, young people, African American, Latinx, LGBTQ, and global creators are leading into the future. 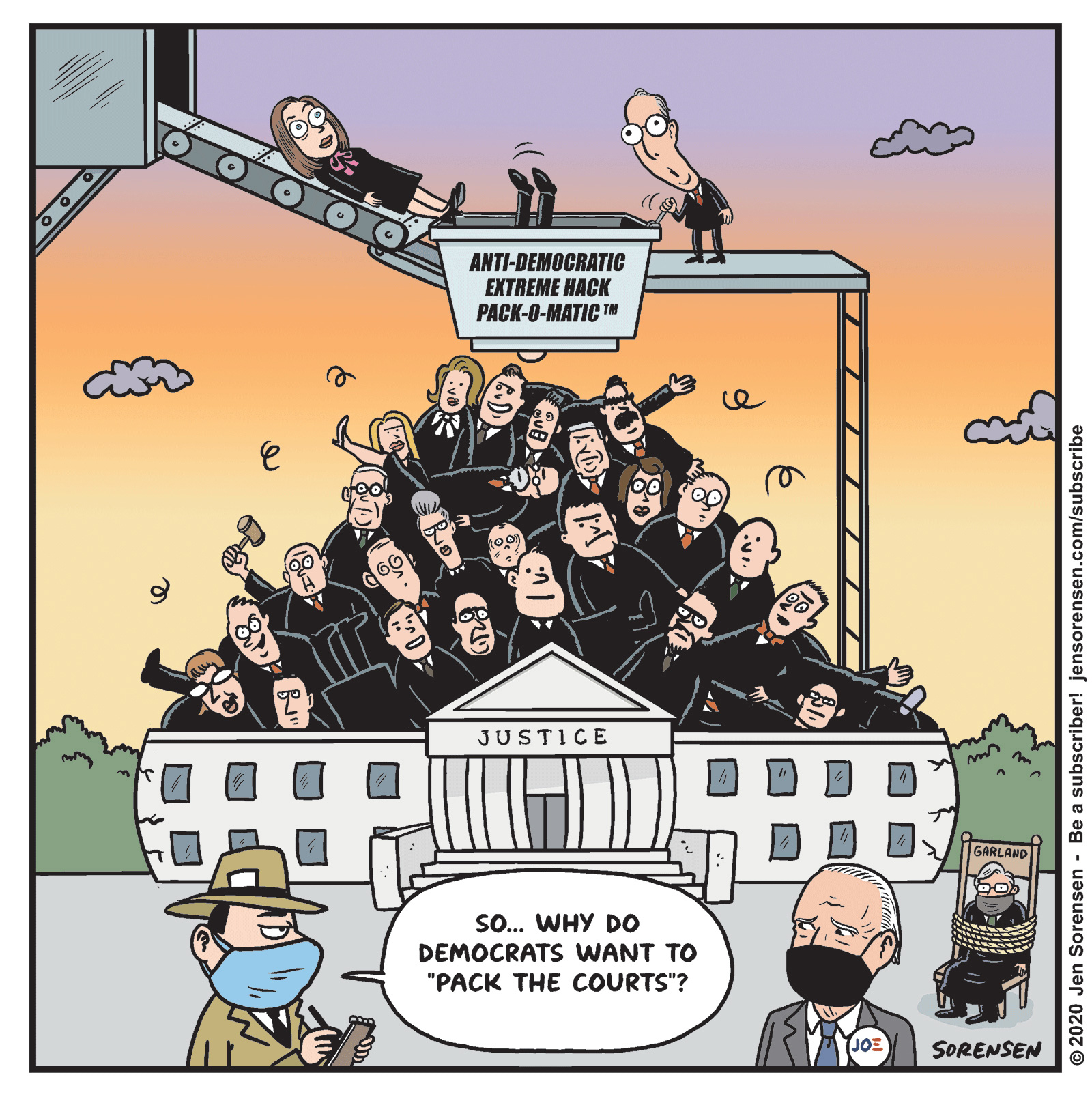 Full Up, by Jen Sorensen, whose work has run in The Progressive, The Nation, Daily Kos, NPR, Ms., Politico, et al. Thanks, Jen, for help navigating the universe of emerging cartoonists! 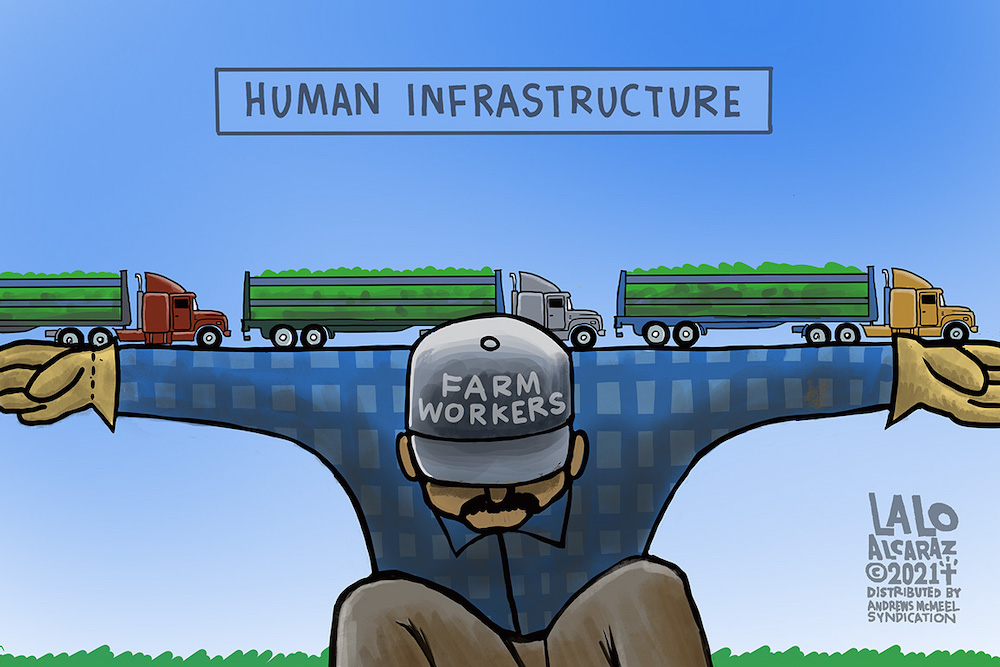 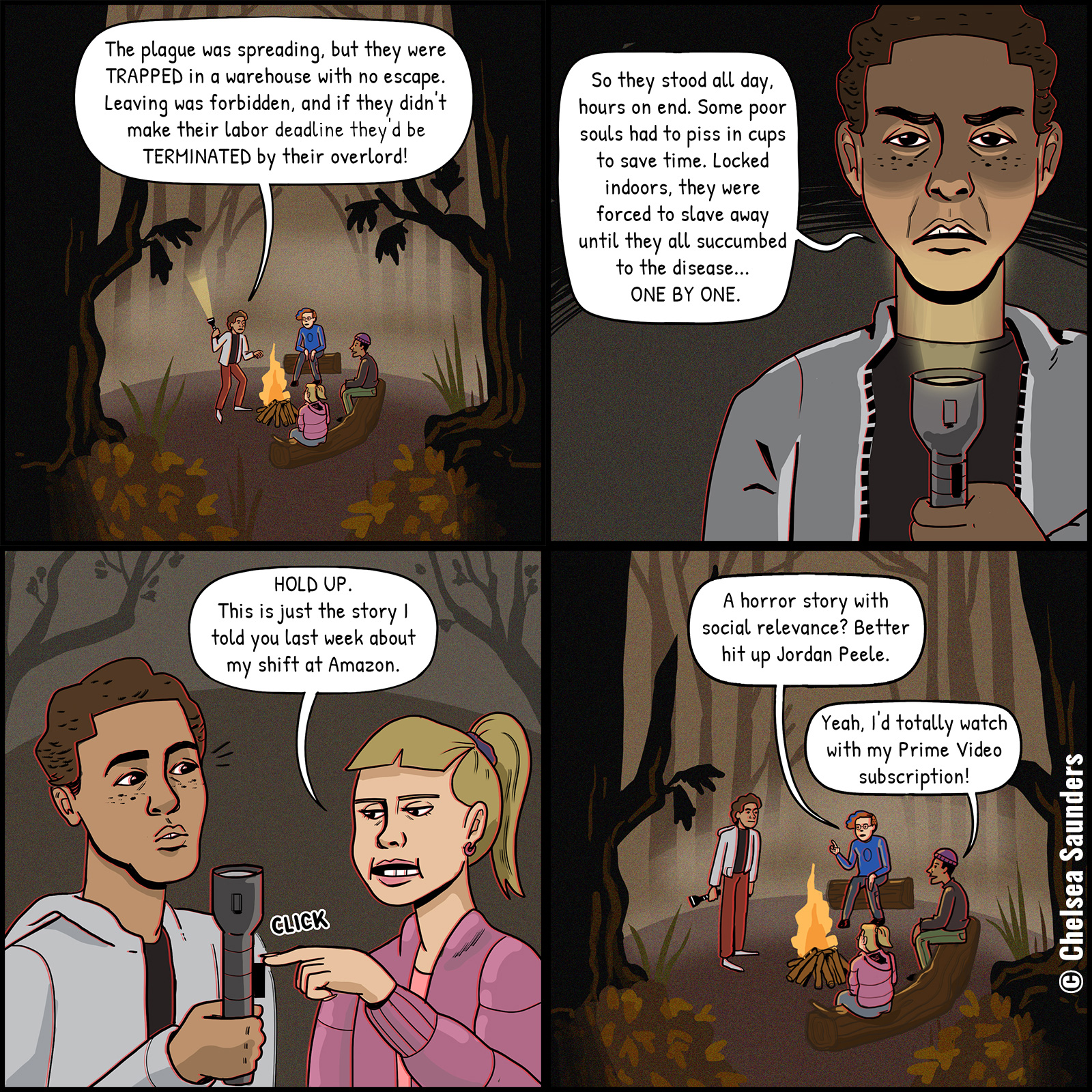 Warehouse of Horror, by Chelsea Saunders 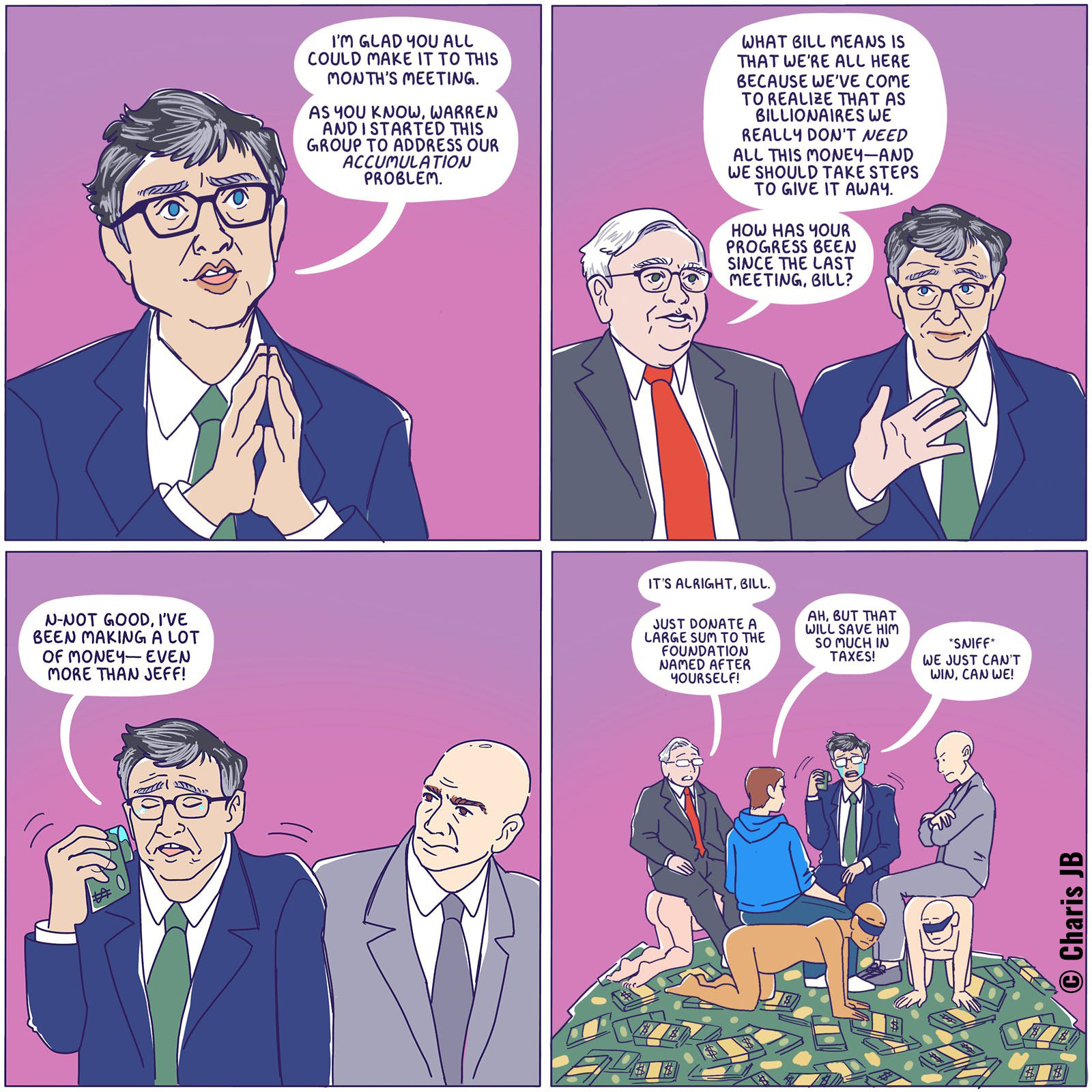 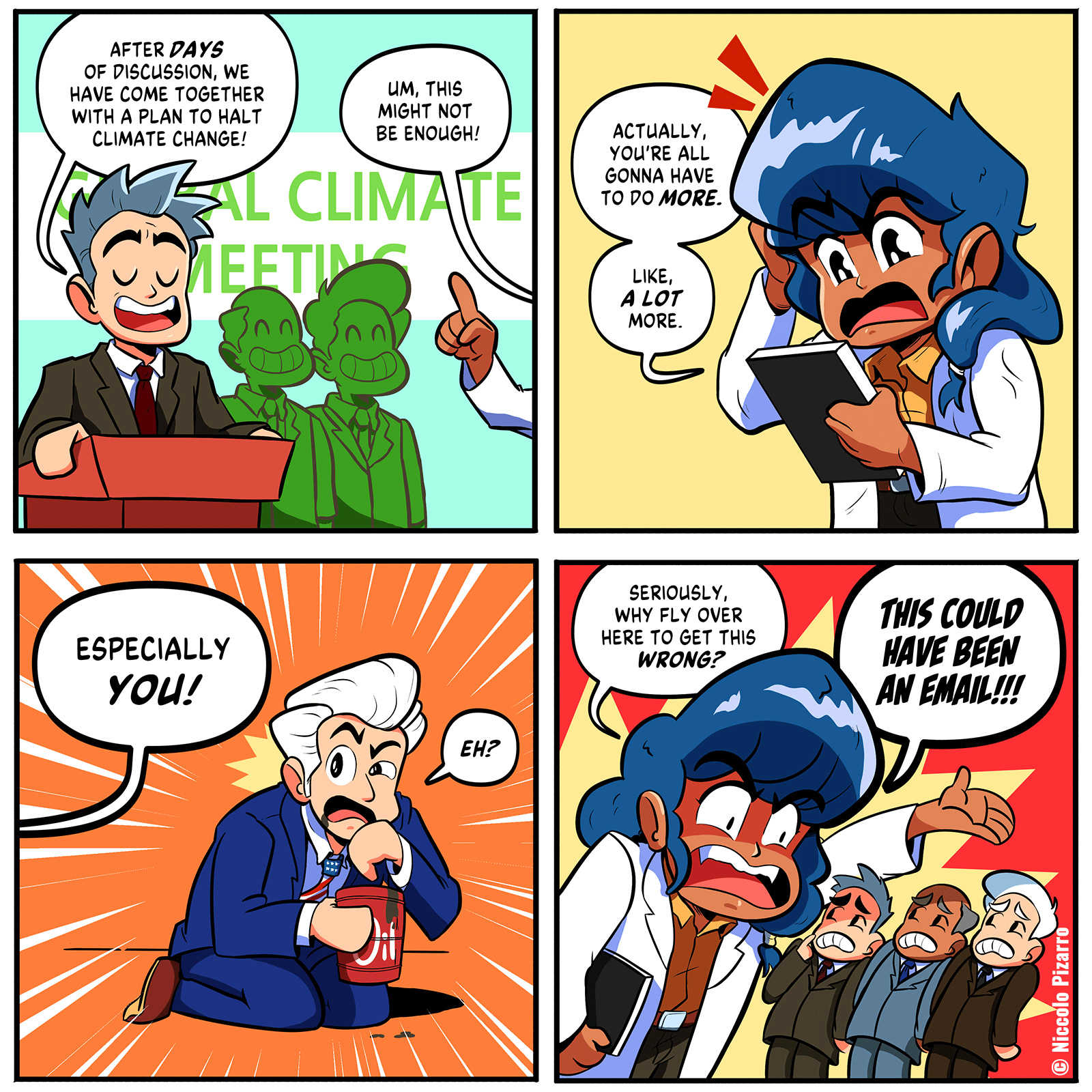 Crude Awakening, by Niccolo Pizarro, creator of comics on race, politics, baseball, and growing up in NYC

Two big problems with that: (1) The internet is so overloaded that finding any particular cartoonist is, as Duffy put it, “like finding an individual snowflake in a blizzard;” and (2) posting work online is not a career plan, for the webisphere is a cold dark space that rarely pays a salary … or anything!

Yet thousands of intrepid souls around the world are pouring their talents into the challenge of connecting with the public while supporting their art. Today, animated cartoons, multi-panel stories, graphic non-fiction books, and more are finding support from direct sales to subscribers, self-syndication, live events, foundation grants, and direct work with unions, enviros, civil rights groups, and other like-minded organizations. Plus, they are inventing whatever else they can to support their cartooning habit and advance the civic causes their freewheeling democratic voices are championing.

More than celebrating their skills and gumption, We the People who benefit from their audacity and tenacity should seek them out and rally ’round to help this editorial art flourish anew.

Fans of political cartoons can rejoice at the existence of three websites, curated by cartoonists themselves, that offer cornucopias of cartoons from established and emerging artists. Feast on what the corporate powers are taking from our newsfeeds!

The Nib, a comic site edited by Matt Bors, delivers a selection of cartoons to your email inbox every morning. The daily ‘toons are free but if you sign up as a member (for as little as $4/month), you’ll be helping those cartoonists and editors actually make a living–plus you’ll get more cool stuff. TheNib.com

Check out the offerings of the Association of American Editorial Cartoonists. EditorialCartoonists.com.

–Boss William M. Tweed of New York City bellowing to his subordinates in 1871

Boss Tweed was the wholly corrupt tyrant who ran the notorious Tammany Hall political machine that ruled the city’s government, courts, treasury, ballot boxes, and business development. The “pictures” he desperately wanted stopped were editorial cartoons by Thomas Nast, Harper’s Weekly’s wickedly creative caricaturist, generally recognized as the progenitor of US political cartooning. Tweed said he didn’t “care a straw” for anything that reporters and editors wrote about him and his thieving machine, since “My constituents can’t read, but damn it, they can see the pictures!”

When Tweed couldn’t force Nast to stop drawing, he tried to buy him off. An emissary representing a group of wealthy Tweed backers offered $500,000 (the equivalent of $10 million today) for Nast to go off to Europe to study art.

Undeterred, Nast’s skewering of Boss and his Tammany cronies continued full tilt, finally causing many of the machine’s electoral faithful to gag at the greed and join in driving the whole bunch from office. (Some even fled the country–though probably not to study art.) Tweed himself was later convicted on 204 of 220 fraud and money laundering charges and sent to the Ludlow Street Jail, where he died in disgrace … done in by a cartoonist’s pen and ink. 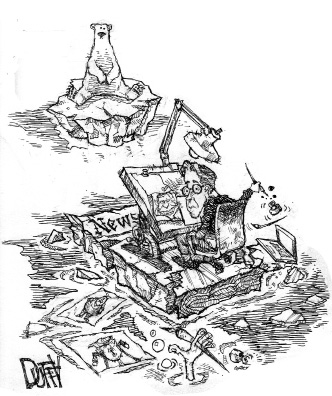