Lets all build some downhome democracy

In my constant travels and talks throughout
our country, I find that something big
is happening at America’s grassroots that
the media power centers are either missing,
misreading, or plain ignoring:
Democracy is breaking out!

From coast to coast, in just about every place that
has a zip code, there’s a rising assertion of a truly
American, democratic patriotism that has nothing to
do with Osama bin Laden. What I see, especially in
America’s newly activist and idealistic young people
.is an enduring, positive patriotism of ordinary
folks doing the essential work of citizenship, organizing
to take on the power structure (local and
global) that’s running roughshod over them. In hundreds
of communities in every region of the country,
people are questioning authority, confronting the
corporate order, and challenging both the conventional
wisdom and the complacency of the elites.
These outbreaks of unauthorized democracy are
widespread, well-informed, largely successful, truly
inspirational, immensely important and, therefore,
almost entirely ignored by the establishment media.
It takes bifocals to read America today, one lens for
reading the close-up, official version of
what is happening, and another for
lifting our heads and
looking
out to see an entirely different reality.
Despite a decade of steady hype about .the best
of times,. the experience of a majority of Americans
is that the workplace is indeed leaner and meaner,
reducing workers to disposable cogs; politics is a
money game in which people don’t matter; the
marketplace is bullied by a handful of monopolistic
conglomerates that manipulate everything from
prices to the very DNA of the food supply; the ethic
of the Common Good is trashed and elitism is celebrated;
the essential American ideal of self-government
is being brazenly usurped by assorted world trade
scams that enthrone global corporate rulers;
and the lofty goal of creating a democratic republic
is shoved aside by the powerful few who prefer
empire to democracy.
Conventional wisdom says that Americans want to
go back to the way things were prior to September
11. But I believe that an unconcluded majority
yearns to reach forward, rather than return to a status
quo antebellum that had shown little interest in
their economic and political status and no respect
for their voice.
Last spring I spotted a bumper sticker on a pickup
truck here in Austin: .Where Are We Going? And
What Am I Doing In This Handbasket?.
This is not a theoretical question for
most Americans, who
have seen the privileged few
steadily separate themselves
from our society’s commitment to
the common good. From the
Nixon presidency forward, a narrow
class of corporate, investor,
and political elites has commandeered
practically every lever of
economic and governmental decision-
making in our country (and
globally), and is pulling those
levers to advance its wealth and
power at the expense of working
families, small farmers, independent
businesses, our communities,
our health-care system, our
air and water and food, our privacy
and liberties, and even our
basic right to self-government.
This is a daily assault on
America, coming from the bastions
of privilege on Wall Street
and in Washington, and it’s now
striking millions of people. At its
core, this is a profound assault
on America’s middle-class possibilities,
on the viability of small-d
democracy, and on our nation’s
sense of being a united society
with a shared destiny.
The story of this assault is plenty
big, but bigger yet is the story
of how Americans are not meekly
surrendering to it, but teaming
up to whack the assaulters right
in their snouts. It’s a story about
American grit, about how people
are rallying beneath the media
and political radar screens to
retake our democracy street by
street, issue by issue, greedhead
by greedhead.

Fight the power, have fun!

While we develop the civic side
of our community, let’s also wallow
in the glorious cultural side.
Remember, the Chautauqua spirit
is a festive one, and these events
are to be something that regular
folks will want to come to, bringing
their families, friends, neighbors,
church members, co-workers,
bowling buddies, and the
whole community. The setting is
not a lecture hall, but more like a
county fair, with lots going on all
at once, including:
Great music, comedians,
clowns (Patch Adams will be at all
of our events), artists, and other
top performers.
Food and drink, we’re planning
an Organic Food Kitchen
(thanks to the great folks at
Organic Valley and other organic food
companies); we’ll ask local
chefs, farmers, grocery markets,
and other food makers to bring
their goodies; and YES, we’ll have
beer and wine!
Stuff for kids, ranging from
games and puppets to poster painting
and bumper-sticker
making.
Crafts and hands-on demonstrations,
including making patches
and assembling quilts that
express the grassroots, democratic
theme of the Chautauqua.
A tent for poetry slams, storytelling,
songwriting, and such.
Whatever else we can think of
that’s fun a “Dunk-a-Lobbyist”
booth, a baseball game, chess, a
cook-off . . . you name it.
If nothing else, the Rolling
Thunder Tour will be an uplifting
celebration that brings all sides of
town into contact, not merely
gathering organizational leaders,
but reaching into the neighborhoods,
clubs, churches, bars, and
wherever else will let the larger
community get to know each
other, learn from each other,
laugh, eat, and see what we
might do together. I think all of
us will be surprised at how much
progressive activity there is in our
own town and how much potential
we have to take our democracy
back.
I find in every town I visit that
there’s a yearning for political
family, especially since
September 11.
Yes, we now have the Internet,
e-mail, and other forms of high-tech
outreach, but we.re in desperate
need of .high-touch. outreach,
too. Let’s get together and
actually talk with each other
through a democratic Chautauqua
movement.
The tour is being initiated by a
wide range of groups (see p.3
box), but local groups in each city
will do the heavy lifting. Each of
the Downhome Democracy events
will be a catalyst for local coalition-
building, beginning with the
planning and production of the
one- or two-day festivals.
To be part of the tour and the
process, a broad base of local
progressive groups will form a
coordinating coalition that will be
responsible for structuring their
event, finding the right venue,
working their membership lists
and doing local promotion to turn
out a great crowd, staffing the
festival with volunteers, and
doing the cooperative leg-work to
make it happen. We’ll also ask
each coordinating coalition to
identify a unifying issue or two
(living wage, public financing of
elections, etc.) that local people
can work on together beyond the
event, thus keeping the coalition
process in action.
The national Rolling Thunder
partners will help with event
coordinating, provide organizational
support, add to the crowd building
effort, offer name speakers
and entertainers, assist with
media, provide engaging workshops
and training specialists,
and generally .be there..
In addition, we.re planning to
have a mobile electronics center
at each festival. Sort of a Bob-
Roberts-Mobile, it will arrive prior
to the event and stay afterwards.
Staffed with professionals, it will
offer training for local activists in
the use of these electronic tools
for everything from canvassing to
media.
It also will leave behind an
invaluable resource: We intend to
collect and compile, on the spot,
a computerized list of those who
come to the Chautauqua, and this
list will be available for free to all
of the groups that help produce
the event, allowing them to stay
in touch with the attendees and
involve them in future actions.
Coordinating coalitions have
begun planning Chautauquas in
Tucson, Chicago, Austin, Atlanta,
Madison, Seattle, and Colorado
Springs, and groups from 20
other cities have approached us
about being part of the tour. We
hope you’ll get involved with us.
as a local organizer, funder,
national planning partner . . . or
at any level of participation.
Democracy is not something
that just happens; it has to be
built from the ground up. Let’s
roll. 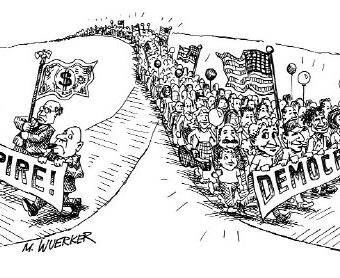