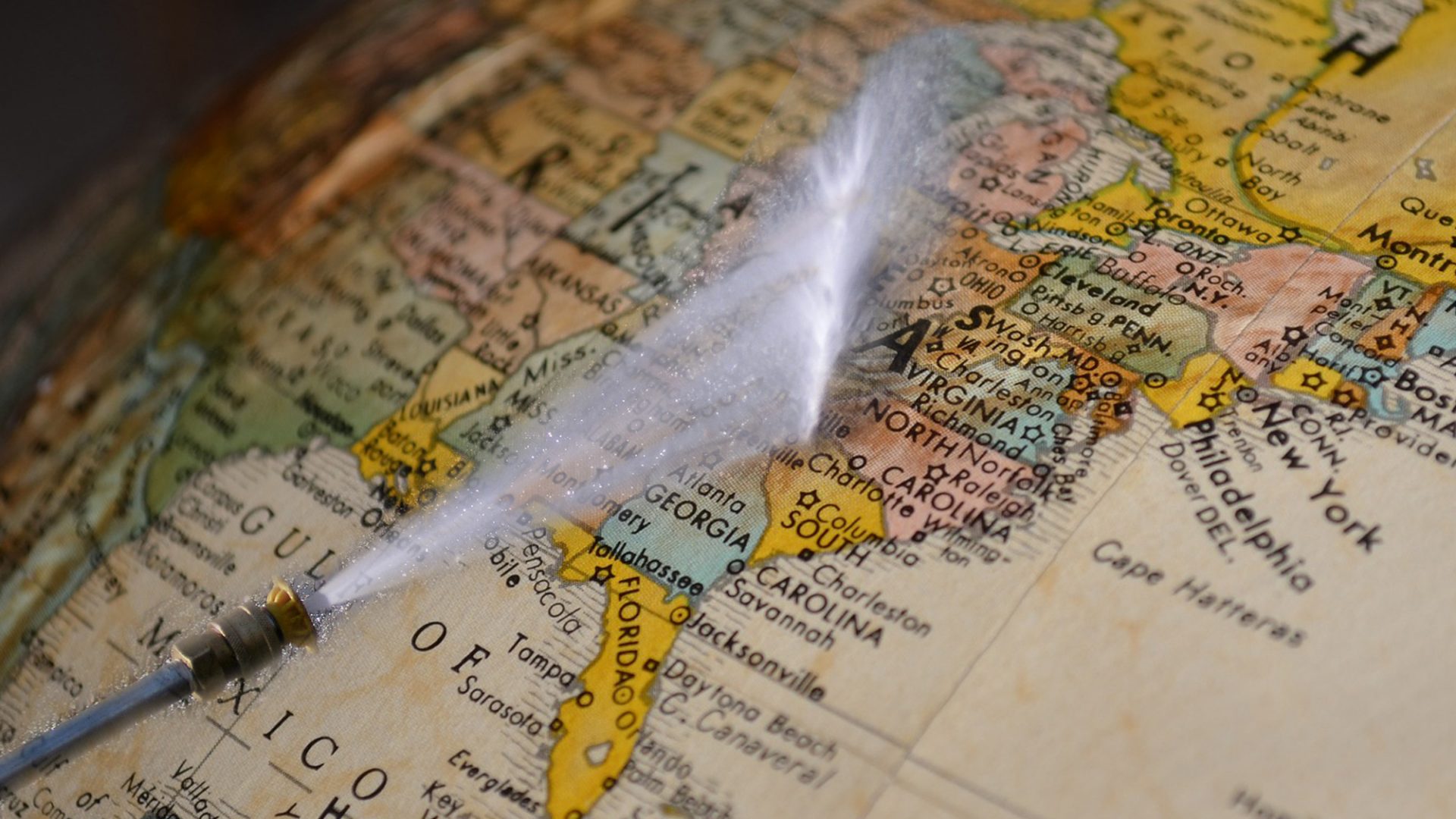 “Power concedes nothing without a demand. It never did and it never will.” — Frederick Douglas, 1857

One of my favorite cartoons strips is Pearls Before Swine, created by Stephan Pastis. In a December drawing, his cantankerous character, Rat, is writing out his “Goals for the Next Year,” which he boils down to one demand: “Be better than the last @#$%&*@! year.

I’m with Rat. The pandemic made 2020 excruciating, but the long political year also whipsawed our emotions with rushes of highs and lows: Trump’s daily outrages; Bernie Sanders’ progressive surge; mass protests over police murders of Black people; the GOP’s flagrant rush to suppress people’s right to vote; an extraordinary burst of grassroots organizing, especially by young people of color and climate activists; Democratic Party power brokers’ orchestrated assault on progressive candidates, groups, and policies; Trump’s tumble into more and more naked megalomania; progressive groups that lifted the soporific Biden campaign to victory in key swing states, flipping even the GOP strongholds of Arizona and Georgia. Recently, with only a couple of exceptions, the president-elect has chosen corporate-approved Washington insiders as his top officials and advisors, signaling another Democratic agenda of minimalism and incrementalism that leaves the grassroots progressive movement on the outside looking in.

The year ended with neither a bang nor a whimper but a mass sigh of relief. At least, it’s over.

Here’s to a happy, healthy 2021. But here’s the deal: It’s going to take you and me to make 2021 a happy political year. “Wait,” you might groan, “can’t we take a year off?” After all, we’ve busted our butts for years to drag that Orange Menace kicking and tweeting out the White House door, along with his grotesque kakistocracy of Barr, DeVos, Giuliani, Kushner, Mnuchin, Pence, Scalia, Pompeo, and a mess of other truly-awful human beings.

Yes, you did. Job well done. Thanks to all involved.

But the American struggle to make real the promise of our democratic ideals– the creation of a society based on the egalitarian values of economic fairness, social justice, and equal opportunity for all–is not a one-year, one-president job. Removing Trump’s narcissistic, plutocratic, autocratic regime is not the achievement of our progressive goals, but the opportunity to come out of our four-year defensive crouch and go on the offensive again. So, no, we can’t take a year off, because history is calling on progressives to move quickly and forcefully–a la 1932–“to restore America to its own people,” as FDR rightly expressed the overarching challenge. Two factors make this undertaking as urgent as it is necessary:

FACTOR #1: TRUMP’S TRASH
He’s going, but Trump will leave behind an odious backroom cabal of corporate lobbyists and obsequious congressional Republicans who fawned over him and enabled his reign of greed. By ceaselessly monkeywrenching rules and legal procedures, Trump’s henchers spent four years riveting into the structure of our government new ways for moneyed interests to prevail over the majority interests of America’s workaday people and communities. Now, with Trump out, corporations are hiring more lobbyists than ever to continue scheming with the sour old Senate autocrat, Mitch McConnell, to hogtie progressive change proposals and even extend the insiders’ anti-democratic control of our economic, political, and social systems.

An even more pressing clean-up forced on us is Trump & Co’s spoilage of the very essence of America: Their insidious attempt to displace our nation’s core democratic ideals and humanitarian values with a moral code that amounts to survival of the fattest. Their intention is to rationalize and sustain a plutocratic order with one governing imperative: The richest families and corporations are entitled to all they have and all they can take.

The specifics of this overreach have been on constant display, with such affronts as locking refugee babies in cages, unleashing the military on our own people, and imperiously demanding that courts erase the votes of millions of Americans. The audacity of each outrage was masked by bogus assertions of executive prerogative–and the abuses were so constant that they took on a numbing normalcy that obscured how deeply they corroded our society’s democratic mores. In effect, they contaminated our value system, injecting poisonous precepts of an UnAmerica–a nation that accepts systemic inequality as a natural and immutable part of our social order, advances the supremacy of property rights over all other values, and enshrines hatred as a political strategy and a means of social control. A spritz of pumpkin spice air freshener won’t cover up this stink; it’s going to take deep political cleaning.

FACTOR #2: BIDEN’S CAUTION
The incoming Democrat is a relief, but he’s hardly a pulse-quickening change agent. I keep hoping to be pleasantly surprised by some signs of progressive solidarity in him, but that’s simply not who he is. After all, Biden was hand-picked by the old-line, high-dollar funders and operatives of the Democratic Party specifically to block the popular demand for the real changes proposed by Bernie Sanders, Elizabeth Warren, and the grassroots upstarts of the progressive movement. I don’t doubt that this 48-year Washington insider is well-meaning, but he’s no FDR, and “Back to Barack” is not going to deter–much less stop–the plutocratic usurpation of our control over our own lives.

Usually, the Powers That Be swat away the kind of big-ticket reforms our country needs by haughtily asserting a few hoary economic fables they dress up as immutable “truths.” But times are a-changing. In recent years, some seismic shifts in the political zeitgeist have exposed their go-to truths as nothing more than self-serving fabrications: … Read more

Sure enough, in mid-December, Biden scolded progressives for complaining that most of his choices for key government posts were business-as-usual types and warmed-over Obama officials. Well, yeah, he said, but they have “deep experience” in how government works, adding that he had known many of them for a long time and could rely on them for “bold new thinking.” Uh … no sir. You can’t. That deep experience you praise comes from long careers as inside-the-Beltway operatives in federal agencies, corporate offices, think tanks, and other establishment institutions where “bold” and “new” are not conducive to career advancement.

Progressive thinking–and action –will only come from this White House if We The People make them be bold. Thus, 2021 is not the time to crank back our La-Z-Boys, pump a few 12-ounce elbow bends, and grouse about Biden’s inaction. Rather, this is a primo time for all progressives to get back out there, organizing door-to-door in congressional districts all across the country. Organizing 101 teaches that the most effective time to be political is when you’re not being “political”–that is, when you’re not peddling candidates. So, the off-year is an ideal opportunity for actually speaking with–and listening to–regular folks about their needs, getting their thoughts about the bold ideas we’ve already put on the national table, and rallying them to apply the hard squeeze of grassroots pressure on Congress and the White House to do what the people want.

Interestingly, the progressive proposals that establishment Dems have labeled “socialist,” “extremist,” and “political losers” (such as providing everyone with the same publicly paid, quality healthcare that lawmakers give themselves) are widely popular, even in red districts. In fact–hello!–our proposals consistently get higher approval ratings in national polls than those of Biden, Trump, or the Congress. This is an empowering realization. So, rather than accepting “no” from less-than-popular politicos and lobbyists, let’s take our ideas right to the people.

The first thing we must do is reject, at last, the self-defeating mentality of Dem Party leaders who never cease admonishing progressives to shhhhhh, back off–consistently cackling that now is not the time for our ideas or candidates. Last March, party donors and officials (backed by a chorus of Washington pundits) ganged up on us in a furious rush, demanding that we give up on Bernie and Elizabeth, get practical, and fall in line behind Good Ol’ Joe to beat Trump. Then, after our forces agreed to help, they said “shhhhhh,” don’t pressure Joe to back big policy changes, for that would scare moderate voters. Then with Biden as president-elect, they curtly commanded “shhhhhh,” don’t make lefty demands that could spook congressional corporatists into blocking Joe’s agenda. Soon–mark my word–as 2022 draws near, they’ll again hiss “shhhhhh,” we’re in the midterm election cycle, so swallow the milquetoast we gave you and don’t make a ruckus.

Note that what they’re really confessing is that the official Democratic strategy is to fear the people and tiptoe around them. Yet, as polls and ballot initiatives repeatedly show, people want Democrats to stand on principle and stand up for the economic, health, environmental, political, and social needs of the common workaday majority. And isn’t that what democratic governments are supposed to do? Note also that the real beneficiaries of a go-slow/go-small Democratic Party are the corporate powers and their right-wing allies that are running over the middle-class and the poor. Do the insider elites really believe that the people being run over won’t see Democratic timidity? The best thing we can do for the Biden presidency is to force him out of his Old Washington comfort zone and demand that he rise up to meet the deep challenges of this historic moment by pushing bold, structural change. So, let’s do it.

Well, say those in the know, Bernie and Elizabeth lost, so why should Biden carry their progressive water? Besides, poor Joe is hemmed in by recalcitrant Republicans in Congress, not to mention a swarm of corporate lobbyists, so how can he be expected to enact a bold FDR-style agenda?

Try the people. While play-it-safe Joe won the nomination, he did not win the issue/ideological election. It’s not the Sanders-Warren water he’s asked to carry, but the people’s:

These are not simply poll numbers, but policies embraced last year by a broad cross section of voters in ballot initiatives across the country. For example, as The Nation magazine reporter Bryce Covert wrote in December, Floridians–by a whopping margin of more than 20 points –voted to increase the state’s minimum hourly wage to $15. Indeed, the proposal won more votes than either Trump or Biden!

Instead of fearing the people, Democratic leaders need to get out of Washington and join them. Joe Biden knows the inside game, but he seems clueless about how to rally and organize the power of outsiders to produce genuinely progressive, transformative policies of, by, and for the people. It’s up to us to teach him.

Nah. RootsAction.org co-founder Jeff Cohen explains that “Biden has to deliver for poor, working-class, and middle-class people” or risk the indifference of the voters who carried him to the White House and a wipeout in the 2022 elections (for reference, glance back at the 1994 and 2010 midterm debacles). Sign up for Action Alerts at NoHoneymoon.org.

And for some person-to-person fun and motivation, team up with the local Indivisible group in your town (there’s a handy map at Indivisible.org)–or start one of your own. This national network of local groups grew from a how-to guide to pressuring local elected officials to resist Trump’s agenda. Millions of American organized to put the guide’s principles into action and build an inclusive democracy through collective effort.

Says former Sanders campaign co-chair Nina Turner (and current candidate for Congress): “We know that when everyday people put a little extra on the ordinary, extraordinary things happen.” This really is up to us.