Did you catch George W’s pep rally just before Christmas? The White House solemnly billed it as a two-day “summit” of academics, CEOs, think tankers, and policy wonks to discuss the pressing economic issues facing the country in “Bush II: The Sequel.”

Billing aside, it really was nothing but a photo-op allowing the former Yale cheerleader to show us a few of his choreographed splits and struts in an effort to put a little sis-boom-bah behind his dud of a fully corporatized economic agenda. That agenda includes privatizing Social Security, shifting taxation from corporations and the wealthy to consumers, preventing people from exercising their right to sue corporations that harm them, and unleashing energy companies to drill, clear-cut, mine, and otherwise plunder our natural resources without worrying about those pesky environmental protections.

This is not an agenda that the public has been clamoring for. To the contrary, in poll after poll, the American majority (including most Republicans) has rejected these very proposals. Yet at Bush’s economic summit, they were the sole focus of the discussion, which completely ignored truly pressing issues that do weigh heavily on the public mind: the offshoring of America’s middle-class future, the broadening plight of the working poor, the ongoing corporate scandals and CEO greed, the skyrocketing national debt, the militarization of the budget, America’s dangerous trade deficit, the blowback from NAFTA and the WTO, etc., etc.

The skewed focus of this “National Economic Conference” is no surprise, given the corporate tilt of the hand-picked invitees, including top executives of JP Morgan Chase, Dell, Time Warner, Home Depot, and Charles Schwab. Even more telling was who was not invited. No one at Bush’s policy pow-wow was unemployed or in danger of becoming so, none of the participants’ families lacked health coverage, no one represented alternative energy or sustainable development, none came from a union perspective, and none of those talking so boldly at the summit about Social Security privatization will actually need the program’s benefits for their own golden years. Bush’s Washington is driven by the money powers that fuel the campaigns of presidents and congressional leaders. In the 2004 election, these powers bought more than a seat at the summitthey bought seats at Washington’s back-room tables where the details of Bush’s economic proposals will be written.

For the moneyed interests, campaign contributions have nothing to do with free speech, democracy, and “good government,” as they publicly proclaim. Rather, the money has everything to do with buying access, buying a seat at the table, and ultimately buying public policy.

To help you keep score, here’s a list, grouped by specific industries, of some of the top corporate investors in our present, Republican-controlled government. Many more millions of favor-currying dollars came indirectly from corporate lobbying firms, trade organizations, and front groups. But as corporate policies are pushed in the coming months, this is a helpful list to keep handy so you can know, by name, some of the corporations bringing these policies to you. 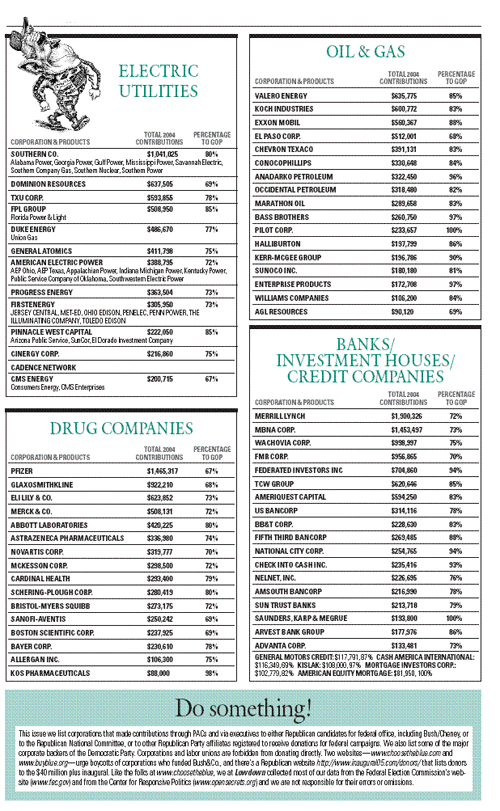 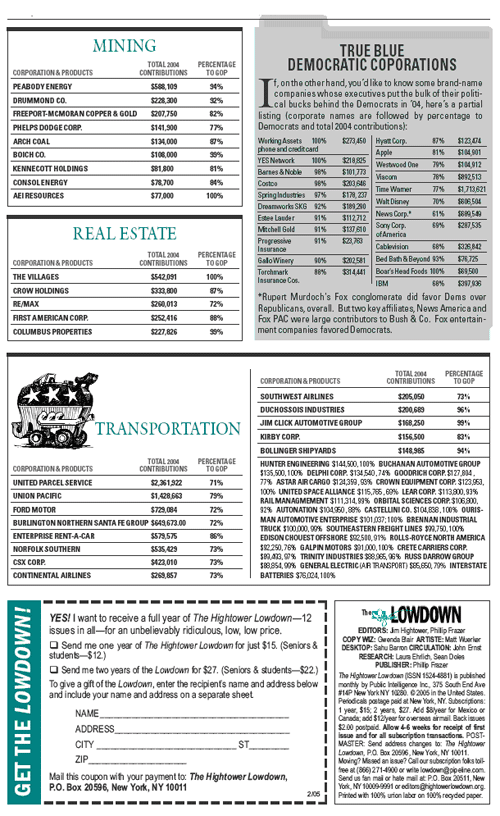 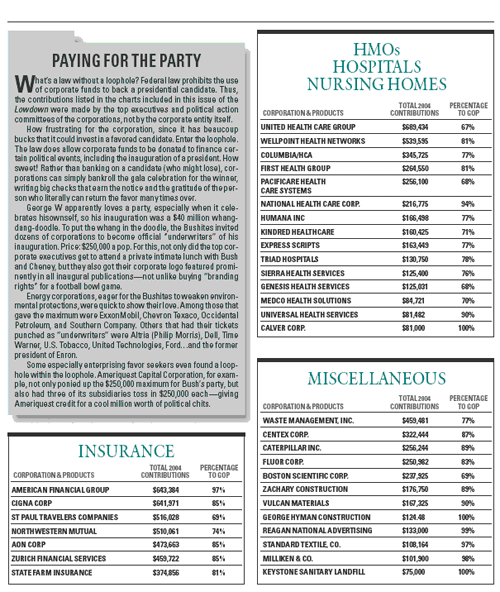 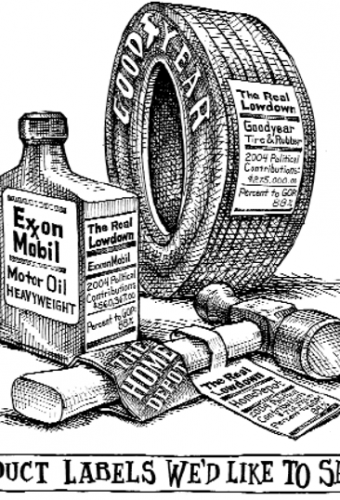