Even small cities like Austin, Texas, where I live, usually have a thriving co-op business community. To show the breadth of these enterprises, here’s a sampling of some in my town.

All Austin Cooperative Nursery School. Providing top-notch pre-school learning experiences since 1953, this educational program was one of the first interracial, intercultural schools in Texas. It draws an eclectic mix of families with different backgrounds from all across the city, engaging both children and parents in learning. All parents take turns assisting in the classroom and are responsible for various tasks in the school’s operation. The non-profit All Austin nursery is a true co-op, run by the membership of parents, teachers, and staff. http://www.allaustincoop.org

Black Star Co-op. A consumer-owned, worker-run pub and brewery–practicing delicious democracy, pint after pint! Five years in development, the brewpub opened just over a year ago and zoomed to success, now boasting 3,000 well-lubricated members (including me). Not only does it brew great beer, but it also brews democracy through its co-op ethic. An assembly of the worker-owners meets regularly to make business decisions by a consensus process. Wages average more than $15 an hour, plus health care benefits. The pub and brewery are in a green building, the co-op is committed to environmental sustainability in all operations, and it buys most of its excellent edibles from local organic farms and food artisans. http://www.blackstar.coop

KOOP-FM. A cooperatively owned and operated radio station, KOOP has faced all sorts of challenges (including three destructive fires) since it began in 1994, yet its dedicated members, volunteers, and listeners kept plugging and built what has become an Austin on-air icon. With some 75 volunteer programmers broadcasting music and public affairs shows each week (including my daily radio commentaries), KOOP has a listenership as diverse as the city itself–and any member can apply to produce their own show, with the co-op providing free training and facilities. http://www.KOOP.org

Third Coast Workers for Cooperation. Focused on helping low-income Austinites launch successful green-business co-ops, Third Coast actively recruits workers to its Cooperative Business Institute. This intensive 16-week training program equips participants with the skills and resources to organize and manage their own cooperative ventures. Last July, the Institute’s first graduating class included some women of color who’ve now established Yo Mamas Catering Cooperative, Austin’s first worker-owned catering business. A bit later a diverse group of young people who were working in a commercial bakery decided they should own their own operation. They, too, went through the Third Coast course and are now proud owners of Red Rabbit Bakery, turning out vegan doughnuts and breads. http://www.thirdcoastworkers.coop

Wheatsville. Opened in 1977 (in part with funds generated by a ZZ Top concert), this top-quality food cooperative has grown from a small grocery in a basement near the University of Texas into a vibrant, spacious, full-service market with $14 million a year in sales and more than 10,000 members (me included). Wheatsville remains a strong practitioner of cooperative democracy, not only in its own operation, but also by giving tangible support to new co-ops getting started in our town. http://www.wheatsville.coop 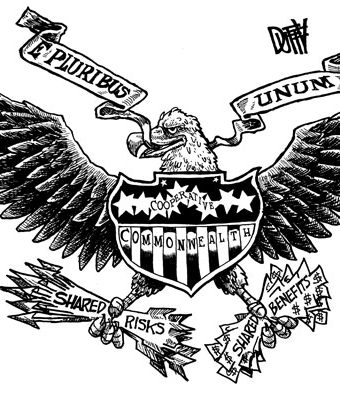