Our tax billions go to losing a war in Colombia

See if this sounds at all familiar to you:
In a faraway land, a civil war has
been raging for decades, pitting peasant
rebels against the military of the
ruling elites; our government, which
has taken sides with the elites, begins
a propaganda campaign to demonize the rebels,
asserting that their insurgency is a threat to our
own national security. Next, Washington begins to
send military equipment to the wobbly ruling government;
however, the rebels make big gains in
the countryside, so we escalate the shipment of
arms to fight them, even sending over “military
advisors” to train the troops of the elites.
This is not just a summary of our country’s early
involvement in the quagmire of Vietnam, but also a
chronicle of Washington’s recent moves to sink us
ever deeper into a civil war in Colombia. The rationale
is that all-purpose bugaboo: the .War on Drugs..
About 80% of the cocaine coming into the U.S.
comes from Colombia, and our government has
been shoveling military aid into Colombia for years
in an effort to destroy the drug production at its
source. Colombia, a nation of 40 million
people about one and a half times the
size of Texas, was the third-largest
recipient of U.S. military and foreign-aid
money last year, receiving nearly $300
million. This year, a whopping $1.3 billion
in aid is wending its way through the
appropriations process in Congress.
Why so much money and military
might to destroy a few coca fields?
Because in the remote lowlands of
southern Colombia, the coca farmers
are protected by a guerrillas army,
as many as 20,000 strong, who since
the late 1970s have been funding
their operations by taxing coca cultivation
in return for protecting the
growers from government forces.

For four decades, the civil war in Colombia has
had the country teetering on the brink of chaos. The
current Colombian President, Andres Pastrana, was
elected in 1998 largely on promises that he would
finally bring an end to the unwinnable war and
return stability and peace to Colombia. Last year, the
government started talking with the largest rebel
group in the country, and Pastrana is now planning
peace talks with the second-largest rebel army.
But a negotiated end to the war is unlikely while
we.re promoting a drug war and the Colombian government
wants to shore up its bargaining position
by winning battles in the countryside. Escalating the
war with billions of dollars in U.S. aid will only drive
the guerrillas away from the peace table.
And despite all the U.S.-funded coca eradication
efforts, the last five years have seen a doubling of
coca production in Colombia.
Rather than learning from history, we.ve now
bought into something called .Plan Colombia,. for
which President Pastrana is asking $3.5 billion over
the next three years. Right now he’s in Europe looking
for billions in development aid. But Europe isn’t
eager to play this game. “There is
a feeling that this is a primarily
military plan and that we are
being asked to clean up the mess
that the Americans are going to
make,” one European diplomat
told the New York Times.
The object of Plan Colombia,
which was cooked up last year by
the Colombian and U.S. governments,
is to retake the 40% of
the country currently controlled
by the guerrillas. The theory is
that the coca plantations can only
be wiped out if the government
regains control of the countryside.
Approximately 80% of the
promised $1.3 billion in the U.S.
aid package will go to the
Colombian Armed Forces so they
can attack the rebels who run
most of southern Colombia. (To
reassure us that the military will
reform its record of brutality
against the peasants, $122 million
was set aside for .programs
to promote human rights and justice
in the region..) The U.S.
already has more than 200 military
advisors and trainers stationed
in Colombia, not to teach
coca eradication, but rather for
infantry and explosives training
and lessons in ambush techniques.
Our military is even building
an intelligence center in the
country, feeding it information
from our spy satellites.

The largest, oldest, and richest
guerrilla group in Colombia is the
Fuerzas Armadas Revoloucionares
de Colombia, or FARC. It is a
force of well-armed fighters who
are not dependent on foreign
support because they have the
money (from taxes on coca fields
and kidnappings of wealthy
Colombians) to purchase arms on
the international market. The
FARC argue that they are not a
narco-trafficking organization.
they only protect and tax the
peasants who cultivate the coca.
The FARC has popular support
in the rural south, which makes
them tough to eradicate; but
eradicating the cocaine trade is
tougher still because the majority
of the drug traffickers who
process and export the drugs are
in northern Colombia, in the territory
controlled by some 8,000
paramilitary troops, a/k/a armed
thugs. These guys are allied with
the corrupt half of the Colombian
Army and according to Human
Rights Watch were responsible for
78% of the human-rights violations
in the country in 1999.
And how will our government
keep that billion bucks out of the
hands of the corrupt Colombian
military or their allies in the paramilitary
death squads? We
thought of that, they say: The
$1.3 billion Plan Colombia aid will
only go to Colombian Army units
cleared of human-rights abuses.
But units like that are so hard to
find that the Colombian military
has had to create three new battalions,
just so they’ll be “clean.”
In fact, for years the biggest
threat to democracy in Colombia
has been the Colombian military
and its paramilitary allies. In the
1980s, after FARC signed a
cease-fire with the government,
its political party, the Patriotic
Union, entered into presidential,
congressional and municipal elections.
What happened to these
would-be democrats? More than
2,000 Patriotic Union candidates
were assassinated by the
Colombian military and paramilitaries.
The FARC.s new political
party is a clandestine organization
whose members remain
anonymous in order to stay alive.

This drug war isn’t all
about drugs

So why is Congress behind this
$1.3 billion boondoggle? One
reason is that, globally, more
money is spent buying weapons
and drugs than any other commodity.
But here’s another clue:
One of the principal lobbyists for
the aid bill was Lawrence P.
Meriage, the vice president of Los
Angeles-based Occidental Oil and
Gas Company. Occidental is currently
enmeshed in a battle with
the Uwa, an indigenous tribe in
Colombia, over oil-drilling rights
on what the Owe claim are their
traditional lands. The Owe representative
in Bogota, Ebaristo
Tegria Uncarria, told us that the
Colombian government probably
will tell the courts to give
Occidental the green light for
drilling as a pay-off for the Oxy
vice-president doing such a good
job on Congress. That, in turn,
will give the Colombian military
and the paramilitaries their cue
to kill more Uwa protesters.
And which U.S. presidential
candidate is a major shareholder
in Occidental Petroleum? Al Gore,
the environmental candidate,
that’s who; Papa Gore was on the
Oxy board of directors for years.
Colombia has a wealth of
untapped oil and gas reserves.
Washington and U.S. corporations
are considering a gas pipeline to
run the length of the Americas
from Alaska to Tierra del Fuego,
and they don’t want the FARC
getting in the way of that. And
then there’s the proposed Darien
Canal, which might some day
connect the Caribbean and the
Pacific through northern
Colombia. The Darien would be
wider than the Panama Canal, so
it could handle the world’s
biggest ships, many of which are
presently barred from Panama. It
will be a lot easier to get insurance
on these two mega-projects
if there’s a .stable. political
regime in Colombia, meaning one
that is willing to roll over for
Washington and Wall Street.

For all the babble about drugs
and democracy, oil and shipping
may be the real reasons why
Congress has allocated billions to
fight the peasant warriors in
Colombia while allocating just
$75 million to help the world’s 40
most heavily indebted countries
struggle free of debt and
poverty.
And how about those
peace talks? We.ve thrown
tons of diplomatic weight
behind the Middle East
and Northern Ireland
peace processes, but now
Washington ignores negotiations
in Colombia
between the guerrillas and
the Colombian government.
Uppity peasants in
our own backyard in
Central or South America
are just not good for business.
Since Cuba’s economic
collapse following
the end of the Cold War, the last
backyard uppities are the FARC.

While we.re spending billions to
wage a war against drugs in
Colombia, the average Colombian
thinks (correctly) that the real
drug problem is right here in the
United States. If there wasn’t a
seemingly insatiable demand for
cocaine and heroin in the U.S.,
the farmers down there wouldn’t
waste their time growing coca
and poppies.
Wouldn’t our billions be better
spent trying to wipe out our
addiction problem rather than
dousing the Colombian countryside
with herbicides? You’d think
so, but then, no one’s ever gone
broke overestimating the cynicism
of our representatives in
Congress. Even though studies
consistently show that increasing
drug treatment is the most effective
way to reduce drug use, 60%
of the money spent to fight drugs
goes toward law enforcement and
incarceration.
Who’s snorting, shooting, and
smoking all this coke, crack, and
smack? Seventy-four percent of
U.S. drug users are white. But
who’s being locked up?
Mostly those poor blacks
who see the profitable
drug industry as their
quickest, or only, ticket
to the American dream.
While only 11% of
America’s illicit drug users
are African-American,
they account for 37% of
those arrested for drug
violations. According to
the Justice Department,
70% of U.S. prisoners are
in for drug offenses, or
were drug users when
they committed their
crimes. There are more
Americans in prison than there
are on active duty in the military. 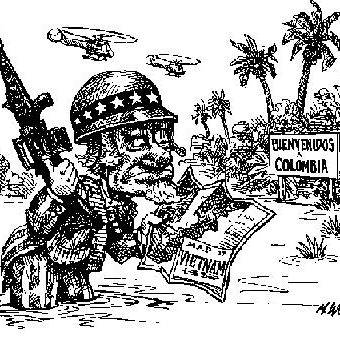