Political outsiders are the only change we can count on

At a time when We The People have been vociferously and unequivocally demanding that our political aspirants offer Big Ideas on America’s Big Issues (good jobs, health care for all, the wars, Wall Street greed, our collapsing infrastructure, big-money corruption of government, etcetera), the presidential campaign has taken a dive into the politics of lipstick and other smears.

Barack Obama’s campaign has been oddly tepid, as if on cruise control. It has not been hammering its best ideas, such as his call for a massive, long-term, multibillion-dollar program to restore America’s economy and world leadership through a Green Deal that would create millions of middle-class jobs and achieve true energy independence from Big Oil. Far worse, the once-proud “straight-talk express” of John McCain has dissolved into a pool of Karl Rovian sleaze.

The McCainites shrieked in September that Obama had called the sainted Sarah Palin a lipstick-wearing pig. Which, of course, he had not. Wait, they shrieked even more shrilly in a campaign ad, Obama supported a bill to require “comprehensive sex ed” for kindergarteners, forcing children to learn about sex “before learning to read.” Which, of course, he had not. Then came last month’s Wall Street banking collapse, and McCain immediately popped out an ad huffing that Obama was getting his advice on financial policy from a former CEO of one of the failed banks. Which, of course, he was not. McCain’s henchmen have also spread rumors that Obama is a Muslim, that he is not even an American citizen, and that he won’t put his hand over his heart to pledge allegiance to our flag. Which, of course, he is not, he is, and he does. And have you heard? Obama has fathered black children!

Such stuff would be a knee-slapping hoot if it was a skit on “Saturday Night Live,” but this is a campaign to choose the president of the United States. Every day that McCain and crew can set the media yackety-yackers buzzing over nonsense and force Obama to respond to lipstick is a day that there is no national discussion of what matters.

This would be crawl-into-a-dark-hole depressing except for one thing: YOU. In recent weeks, I’ve been traveling a great deal, participating in grassroots events in such disparate places as Colorado Springs, Baraboo (Wisconsin), northern New Jersey, Kansas City, and Denison, Texas (where I was born and raised). Everywhere, people are enthusiastic, on the move, determined not to let America be suckered again, and filled with a spirit of cautious political optimism.

People who have never (or at least not lately) been moved to pay attention to politics are engaged. The talk at chat-and-chew cafes, in workplace break rooms, on commuter trains, on bar stools, and in every place outside of funeral parlors is about the election. Hundreds of thousands of young people are volunteering. Even grade-school kiddos are talking about Obama and McCain. The political dynamic is electric, and there is a sense that real change is possible.

As Woody Allen once observed, a big part of life is just showing up. This is certainly true in elections, where turnout matters. I always thought it was rather pathetic for the McCain camp to sneer at the huge crowds that show up for Obama events and for McCain to mock Obama as “a celebrity.” I can tell you from experience that political crowds are hard to generate, and drawing huge ones is at least a clue that the candidate has unusual popularity–not anything to scoff at when you’re in a popular election. Interestingly, now that Palin has proved to be a turn-on for the GOP faithful and is producing big crowds for McCain’s rallies, we hear less from that campaign about the shallowness of celebrity

The Bushites’ trillion-dollar giveaway started out as a bailout for banks with big holdings of investment schemes based on home mortgages. Then lobbyists got “any other financial instrument” included. [read more…]

The little-reported story, however, is that folks are not merely going to speeches, they’re going to work. Both parties have all of their reliable political troops at work, but many, many more volunteers are showing up this year, especially in the Obama camp, altering the arithmetic of the election and befuddling pundits and pollsters.

The historic Obama-Clinton primary race drew millions of additional voters to the polls. The vast majority of them are still energized, with thousands now volunteering to help register and turn out millions more in November. An Associated Press survey finds that since the 2006 election, more than two million Democrats have been added to the rolls in the 28 states that register voters by party. The same survey finds that Republican registration has dropped in those states by 344,000.

This grassroots registration effort, running under the radar of the conventional media, can alter the balance in such key states as Pennsylvania, where Democrats have added 375,000 voters since 2006, while Republicans have lost 117,000. Nationwide, there are now about 42 million registered Democrats and 31 million Republicans.

The GOP has long used its deep pockets and micro-targeting systems to build a get-out-the-vote advantage. This year, however, various Democratic constituency groups are fielding an army of foot soldiers, a move that should dramatically increase the number of voters. The AFL-CIO, for example, has allocated $53 million to reach 13 million union-friendly voters in 24 priority states; MoveOn.org is spending $38 million to help add 500,000 young voters to the polls in swing states; more than 1,400 members of the service-employees union (SEIU) have taken leave from their jobs to work full-time for various Democratic candidates in 12 states; and America Votes, a coalition of 50 groups (ranging from the NAACP to the League of Rural Voters), has a $25 million budget to coordinate a national ground campaign.

People are expected to show up on November 4 in such numbers that election officials in state after state are both thrilled and alarmed. The alarming part is that the anticipated turnout tsunami (including the likelihood of the highest young-voter turnout in American history) will swamp poll workers, causing long lines, delays, and explosive frustrations in many precincts. It’s difficult for counties to recruit, train, and pay for election-day workers in normal years–and this one will be way above normal.

Progressives on the move

The buzzword for this year’s presidential election is “change,” driven by the fact that a whopping 81% of the public say that our leaders have put America on the wrong path. The rising clamor for a new direction is so strong that even McCain, who had been touting his long lifetime of experience, is now straining to claim that he-a 26-year member of Congress and a comfortable Washington insider –is an agent of change.

But real change can’t come from one elected official. Not even a president. Rather, progress is made incrementally by hundreds of “change campaigns” run by grassroots forces. These efforts are rarely spotlighted by the media giants, yet they offer the brightest hope for advancing a true populist agenda and empowering America’s progressive majority.

As we know from experience, the system won’t miraculously turn democratic, nor will public policies turn progressive, merely by putting Democrats in charge of the White House and Congress. For progressive results, the progressive movement itself must get stronger, broader, smarter, more effective, more resilient–and less reliant on getting occasional favors from a few big-name politicians who’re nowhere near as progressive or as gutsy as the people themselves.

The good news is that this movement has been gaining strength, developing its skills, and winning more elections over the last several years. Such groups as Progressive Majority, Wellstone Action, and Progressive Democrats of America have been recruiting, training, funding, backing, and electing thousands of candidates for local, state, and congressional offices. Teaming up with unions, churches, environmentalists, women’s groups, farm advocates, poor people’s organizations, clean-energy activists, and so many others, these progressive forces are in the field again this year with some exciting campaigns. Since the national media ignores these efforts, we’re offering here a small sample of the different sorts of vibrant, non-presidential races under way.

When politicians, campaign donors, and lobbyists control the public agenda, people end up left out and run over. But all across the country, these political “outsiders” are seizing the agenda by putting their own progressive ideas on the ballot at state and local levels. In recent years, this grassroots process has led to such important democratic reforms as living-wage laws, public financing of elections, medical-marijuana protections, clean-energy programs, and expanded health-care coverage.

This year is no different. To see this populism in action, look to Colorado, which has three strong ballot measures that directly challenge the corporate order:

To keep up with these and dozens of other “kitchen table” issues that citizens have put before voters this year, connect with the Ballot Initiative Strategy Center in Washington, D.C. (ballot.org/202-223-2373).

The most important story of Election 2008 is not about Democrats vs. Republicans, but about the thousands and thousands of “little d” democrats who are on the move all across America. They are figuring out how to get around the barriers of power-structure politics to make grassroots issues and people matter–from local elections all the way to the presidency. While their present focus is on November 4, they are in this for the long haul, steadily building the grassroots base and electoral infrastructure necessary to create and sustain a progressive government. This is the difficult but essential work that democracy requires, and it’s the only change we can count on. 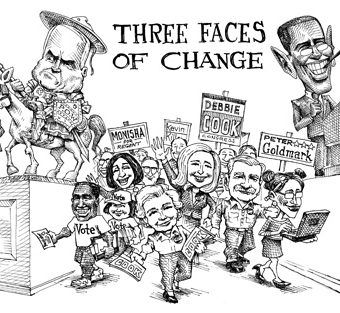