The electric bullet trains that run on the Shinkansen route from Tokyo to Osaka are a beaming source of national pride for the people of Japan. They provide superior comfort and amenities to more than 400,000 passengers a day, consistently delivering them on time. Okay, occasionally a few trains run late, but the average delayed arrival time is [Warning: jaw-dropping statistic coming up]: six seconds.

Safety? The Shinkansen has operated for 50 years, carrying billions of people without a fatal crash. In addition, because so many people choose this route over driving, there are 1,800 fewer highway deaths per year, and serious auto injuries have been reduced by more than 10,000 a year. And, of course, with fewer cars and planes travelling between Tokyo and Osaka, less pollution spews into the air, reducing health problems and environmental damage. 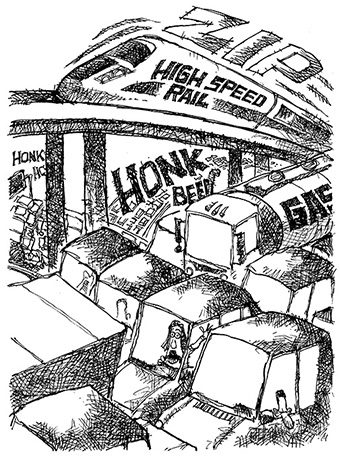