The nasty fellow whose attack-dog, smear-tactic, lie-and-distort brand of politics lifted George W into the White House twice has quietly slipped back into this year’s presidential game. Yes, none other than Karl Rove!

His infamous search-and-destroy approach to political opponents (John Kerry, Max Cleland, et al.) turned his name into a verb–to “rove” someone–and now Rovians have moved inside John McCain’s campaign. Not that Karl himself is directing the senator’s political shop (though he has been giving pointers from the outside). Instead, it’s his political spawn who recently have taken over day-to-day operations.

Steve Schmidt, who’s been described as a “political artillery shell,” is now in charge of strategy and communications. Known as intense and hard hitting, Schmidt has long been one of Karl’s key henchmen. He has run Bush’s campaign war room, served as counselor and spokesman for Dick Cheney, been Rove’s point man on the battles to put Sam Alito and John Roberts on the Supreme Court, and been a member of Rove’s exclusive “breakfast club” that plotted the Bush White House’s political attacks.

Rove operative Nicolle Wallace, who was communications director in Bush’s 2004 run, has been brought in to travel with McCain and keep him on message. Another Rovian, Greg Jenkins, was added last month to try to add some pizzazz to McCain’s campaign events. He’s a former Fox news producer and advance man for Bush.

Meanwhile, the swift-boat slime crew that Rove orchestrated in ’04 to trash John Kerry is back this year in the guise of a group calling itself Vets for Freedom. Pretending to be independent of the McCain campaign, it’s already running ads that attack Obama on Iraq. Far from independent, its founder is a member of a McCain leadership team and its line of attack directly mirrors that of the campaign. 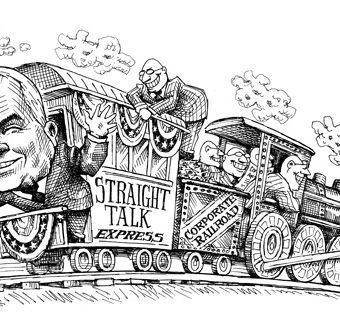