The birth of Amazon

LEGEND HAS IT that Amazon is a classic story of pulling yourself up by your own bootstraps. In 1994, a bright, young fellow named Bezos heads off to the Seattle suburb of Bellevue, with nothing going for him but old-fashioned pluck and a unique idea: Selling books on this new thing called the internet. Some called him crazy, but the bold entrepreneur got his online “bookstore” started in his garage in 1995. And lo, 19 years later, it has nearly $100 billion a year in sales and has made Bezos the 13th richest American.

REALITY. Far from a humble beginning, Little Jeff was raised in a well-off family and sent to the finest schools, including graduating summa cum laude from Princeton University in 1986. The born-in-a-garage story? Yes, Amazon did open for business in a Seattle garage, but guess where it was conceived? Wall Street! For the eight years between Princeton and Bellevue, Bezos was a very well paid Wall Street investment banker, ending up at D.E. Shaw, a powerhouse hedge fund. There, in 1994, he came across a report showing that internet mar- keting was about to boom, expected to grow by 2,300 percent a year. That’s when– click!–the Amazon light bulb lit up in Jeff’s head.

By the way, Amazon’s now-iconic brand name was not Bezos’ first choice. It was initially incorporated as “Cadabra,” as in abracadabra. But it sounded too much like “cadaver.” Then came a suggestion he really, really, connected with: “Relentless.” How perfect that would’ve been! But wiser heads prevailed. So Bezos finally settled on Amazon, noting with typical modesty that the mighty Amazon River is the largest, most powerful river in the world–literally a force of nature. 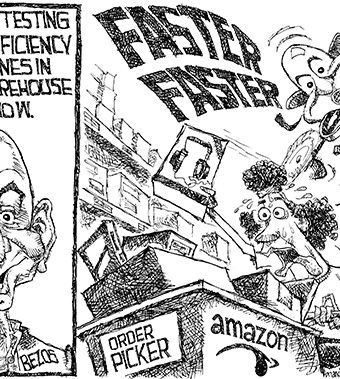