The boss man gets bossier

CITIZENS UNITED not only unleashed the Big Dogs of corporate money in this election, but it also unleashed mad-dog corporate bosses to tell employees how to vote. Prior to that Court ruling, corporate funds could not be used to pressure workers’ ballot selections, but this year the bossmen were freed to assert their political muscle.

For example, CEO David Siegel of Westgate Resorts, a major peddler of time-share schemes, warned his workforce of 7,000 not to vote for Obama. To do so, he wrote in a letter to each of them, would “threaten your job,” explaining that “if any new taxes are levied on me or my company, as our current president plans, I will have no choice but to reduce the size of this company.”

Likewise, Dave Robertson, president of the Koch brothers’ industrial empire, wrote to 30,000 workers in the con- glomerate’s Georgia-Pacific subsidiary, notifying them they’d face assorted “ills” if Obama won. His letter even included a handy voting slate for G-P workers to take into the voting booth, designating Romney and other Koch-embraced candidates as the proper choices for them to make.

Going further, Robert Murray, a right-wing coal baron, personally pressured the salaried employees of Murray Energy to give money to Romney and others he supported. The boss sent dunning letters to employees’ homes, telling each how much to donate and instructing them to send their checks directly to Murray headquarters. He also kept a list of employees who did as told… and of those who didn’t. And he instructed his top corporate lieutenants to squeeze the laggards: “Please see that our salaried employees ‘step up,’ for their own sakes,” he wrote–thus giving a whole new meaning to the term, “political boss.”

If you need another reason to support a constitutional amendment overturning Citizens United, there it is. 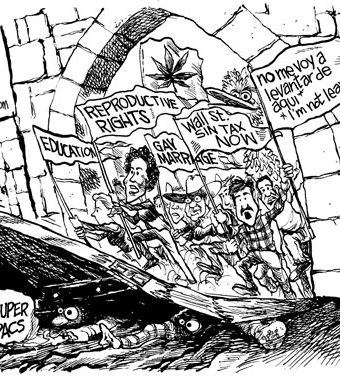