The CIA’S uprising in Afghanistan

You’ve gotta love the CIA for trying. It’ll give anything a shot–including a plan to assassinate Fidel Castro with an exploding cigar. Obviously, it fizzled.

Every now and then, however, one of the CIA’s tricks works. In Afghanistan, for example, agents have been trying to lure tribal patriarchs to stop protecting Taliban commanders and Islamist terrorists in their regions. They’ve tried cash, cars, jewelry, etc.–all with little success.

Then, last year, a CIA officer was wooing a 60-something-year-old chieftain in Southern Afghanistan who has four–count ’em, four–younger wives for whom he was missing the required firm sexual drive. “Take one of these,” said the agent, handing over four Viagra pills. “You’ll love it.”

Indeed, the blue pills turned out to be golden. Four days later, the CIA agent returned to the village, and the old tribal leader was wreathed in a big grin that only sex can induce. The chieftain had never before taken sides in the American offensive, but suddenly he was a spewing fountain of information about the Taliban’s movements. He wanted more of those blue pills.

The CIA plans to lift us to victory–one libido at a time! 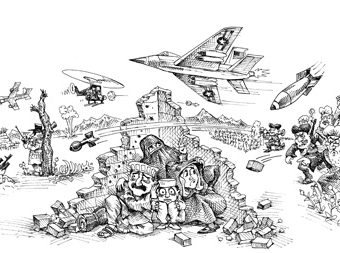