Profits up!” gloat today’s headlines in the business media. The New York Times reports that the profits of 175 of America’s big- gest corporations have soared by a whopping 42 percent this year. The 500 largest corporations now have an all-time record trillion dollars in cash, but far from hiring, cor-porate chieftains are still firing:

Harley Davidson announced in July that even though its profits more than tripled in the past year, it is cutting some 1,600 more jobs this year, on top of the 2,000 it axed last year. It’s also demanding tens of millions of dollars in givebacks from its union workforce in Milwaukee.

United Technologies is celebrating a 14 percent jump in profits during the past year by eliminating about 2,400 more jobs in the next few months, after having slashed 11,600 workers last year.

Alcoa has returned to profitability this year, but will not rehire any of the 37,000 workers it has punted in the past year and half, instead assuring investors that it is “driving restructuring this quarter that will result in further [job] reductions.”

Ford hauled in $2.6 billion in profits just during the three months of April-May-June, but it has cut its workforce in half during the past decade and recently pleased Wall Street by its recommitment to “keeping capacity in check”–which is corporate-speak for “no new hiring.”

General Motors is approaching profitability after having been saved by us taxpayers, but rather than increasing employment here (where the workforce has plummeted to only 52,000 people), it is expanding dramatically in China, where it already has 32,000 workers and has just broken ground on a $250 million advanced technology center to develop alternative energy products. 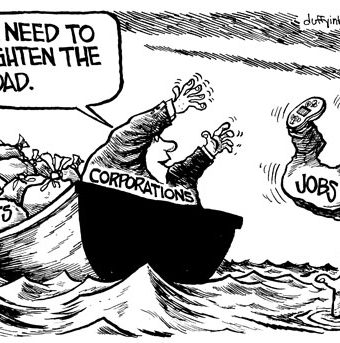