To put an intellectual gloss on their hard-core antigovernment beliefs, the Kochs founded and funded their own think tank: the Cato Institute. Headquartered in Washington, it is home to a flock of leading right-wing thinkers who regularly churn out reports, op-eds, and blogs, as well as appearing frequently on media broadcasts and testifying before lawmakers.

The institute also serves as a loyal champion of corporate “rights.” Among its pet causes are the total privatization of Social Security, elimination of tobacco regulation and taxation, and shifting control of America’s water supplies into corporate hands (thus making our water just another market commodity to be bought and sold for profit). Besides the generous support of the Koch family, Cato also gets funding from Altria (Philip Morris), FedEx, R.J. Reynolds, Volkswagon, and Wal-Mart.

In addition to its national advocacy and media work, this think tank also funds numerous “Little Catos” across the country to spread its thinking into state and local policies. Among its financial recipients are state-level think tanks in Hawaii, Illinois, Maine, Maryland, Nevada, Oklahoma, South Carolina, Tennessee, Texas, and Virginia. 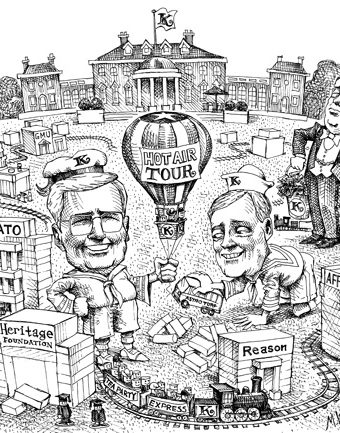