IRONICALLY, AT THE VERY TIME that boneheaded senators in Washington were working furiously to impose their anti-union extremism on our country, most Americans were captivated by some 250 feisty union members in Chicago, joyously cheering them on.

These were members of United Electrical Workers (UE), who were employed at Republic Windows and Doors. I say “were employed” because on December 5, it was announced that Bank of America had abruptly yanked the company’s financing. With only 3 days notice, the workers were terminated, their health coverage was cancelled, and they were denied the vacation pay and severance they were due. “Adios, chumps,” they were told, “out the door you go.”

Well… “No,” said UE’s members, “we won’t go.” For 6 days, they simply stayed in the plant, refusing to leave until they were paid what they were owed. Bank of America certainly could afford to do what’s right, since it was getting $34 billion from us taxpayers in Washington’s Wall Street bailout scheme.

The union’s defiant stand captured the public’s imagination. “We’re doing this for the other working people in the country,” said a 14-year machine operator. “What’s happened to us can happen to anyone.” Bank of America could not weather the outrage it had generated–so the union members won, getting $1.75 million to cover the pay and benefits the bank had taken from them. They left the building chanting, “Yes, we did!” 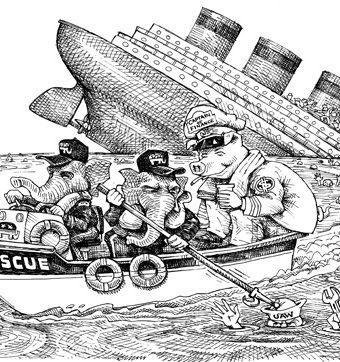