In a show of their selfless commitment to reform, a gaggle of health-industry lobbyists trotted out with President Obama last month for a White House press conference. “These groups are voluntarily coming together to make an unprecedented commitment,” gushed Obama.

Unfortunately, it turns out that the groups’ commitment was to the show–not to reform.

The president should have suspected as much, for the lobbyists represent the health-insurance giants, the drug industry, the big hospital chains, and the makers of medical devices –the very corporations that profit so richly from today’s anti-consumer health-care system, and have fought tenaciously for years to stop even the meekest of reforms.

Still, Obama was thrilled that the industry had apparently heard the national call for change, realized that some sort of reform was inevitable, and decided that its best strategy was to cooperate. Thus, said the Prez, they had made a bold “pledge” to lower the annual growth rate in our health-care costs by 1.5% a year–a cut equal to $2 trillion during the next decade. Wow, that’s a giant savings! “A watershed event,” declared Obama.

But wait. The corporate interests can cut $2 trillion in costs and still make a nice profit? That’s a pretty good indicator of the level of gouging that they’ve built into the system, isn’t it?

Besides, we need to look this gift horse right in the mouth. The pledge was not to cut the actual cost of health care, but only to cut the rate of growth in costs, so the industry will still jack up our costs by 4.7% a year! That’s a watershed?

And, there is nothing in the proposal compelling any company to follow through. It’s a “trust us” reform, designed to stave off real change. Indeed, right after the White House show, industry lobbyists, reeling from an explosion of angst and anger from their own members about trimming $2 billion from profits, claimed there had been no actual pledge to the president. That 1.5% number was only a vague “target” to be pursued eventually and produced “gradually,” if at all, they muttered. 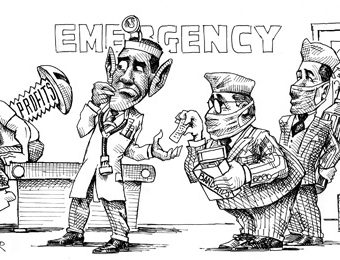