What 8 years of BushCheney have done to our economy

Harry Truman said, “No man should be allowed to be president who doesn’t understand hogs.” That’s never been more true than it will be for the man or woman who walks into the White House on January 20, 2009. 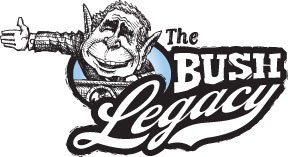 If you’ve ever entered an enclosed, industrialized hog facility where hundreds of fattening porcines live out their short lives, you know that the smell of pig excrement completely redefines “stink.” This stench will knock you to your knees, sear your lungs and brain, and make you scream for mercy. For nearly eight years, the White House has been a confined hog pen for corporate porkers, right-wing ideologues, imperialists, autocrats, and other swinish mess-makers. America’s next president must not only set a new direction but will also have to clean up the mess and eradicate the stink left by the Bushites.

To help presidential contenders, congressional candidates and the rest of us get perspective on the odiferous legacy of the Bush-Cheney regime, the Lowdown is presenting a two-part factual accounting of the administration’s achievements since 2001. This issue will feature Bush’s domestic performance, and the May issue will highlight his international agenda. Hold your nose–and get out your scrubbers.

The 3 biggest hits to the economy

View sources for information found in the issue here

Bush says: “In the long run, Americans can be confident about our economic growth.”(State of the Union speech 2008)

The facts say: While the overall economy has grown, the wages of the average worker have not even kept up with inflation. Meanwhile, nearly five million more Americans have fallen into poverty since 2001.

The top 1% include many more Wall Street financiers than CEOs. The 25 highest-paid hedge-fund managers are earning more than the CEOs of the largest 500 companies combined. Several of these fund managers are taking home more than a billion dollars a year. And guess what? Democratic party campaigns get twice as much in contributions from hedge-fund types as do Republicans!

While military spending has grown 7.5% since Bush took office, spending on almost all domestic discretionary programs has been cut. “Discretionary” means that Congress and the administration can decide, year by year, how much each program deserves. Under BushCheney, that means less of anything that serves the common good, like (in order of size) education, highways and other ground transportation, housing assistance, biomedical research, federal law enforcement, public-health services, regulation of air traffic, and space flight.

The Center on Budget and Policy Priorities has tracked federal spending over the course of BushCheney’s reign of error and concludes that almost all of these programs have shrunk when measured in relation to the growth of the economy as a whole. The Center reports that outlays to mandated federal programs–Social Security, Medicare and Medicaid–have declined 2.4%, while discretionary programs have been cut by 3.7%.

Bush says: “We have increased funding for veterans by more than 95 percent.” (State of the Union speech 2008)

THE AMERICAN JOURNAL OF PUBLIC HEALTH SAYS: In 2004 nearly 1.8 million veterans were uninsured and unable to get care in veterans’ facilities. An additional 3.8 million members of their households were also uninsured and ineligible for VA care. No new study has been done since 2004 but things have only gotten worse.

Bush says: “We reaffirm our pledge to help them build stronger and better than before.” (State of the Union speech 2008)

THE U.S. CENSUS BUREAU SAYS: “Almost 40% of the people displaced from New Orleans by Hurricane Katrina [lived] below the poverty line last year,” and “nearly a third of those who fled the hurricane could not find jobs last year, and thousands more [had given up] trying.”

…deals with the housing crisis by proposing to:

View sources for information found in the issue here