What 8 years of BushCheney have done to the world

Wow, has it really been five years since “Mission Accomplished?” It seems like only yesterday that our Glorious Leader was strutting around in a top-gun outfit, cockadoodling about American prominence in the world and wallowing in job-approval ratings of 28%. 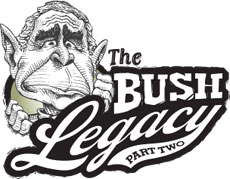 Now, after all his lies, all the lives and blood he cost us, all the money wasted and debt accumulated, all the opportunities squandered, all the credibility and respect drained, the little banty rooster has sunk to a public-approval rating lower than that of several major diseases.

In this issue, part 2 of the Lowdown’s factual accounting of the Bush legacy, we put the numbers to his regime’s performance on international matters. This record helps explain why 81% of the American people presently say that our country is headed in the wrong direction.

On top of the 4,037 U.S. military-personnel deaths, around 1,200 employees of Halliburton, Blackwater, and other corporate contractors have died. Plus 309 members of other nations in the “multinational force.” Plus 491 U.S. military fatalities in Afghanistan. Plus an unknown number of Afghanis. [http://www.democracyarsenal.org/ 2008/02/ contractordeat.html]

In May 2007 the Dept. of Labor reported at least 12,000 contractors have filed claims for disabling wounds.

BushCheney, who predicted in 2003 the whole Iraq venture would cost about $50 billion, concede that the tab is over $600 billion and running. But the latest and most exhaustive accounting is by Joseph Stiglitz and Linda Bilmes (he’s a Nobel-winning economist at Colombia University; she’s at Harvard). They came up with $3 trillion ($5,000 a second). They include the cost of treating our tens of thousands of wounded troops AND replacing the staggering amount of military gear used or lost.

W’s war on terror Number of serious terrorist attacks on U.S. soil foiled since 2001: None

Number of active-duty army divisions rated at the highest readiness levels in 2001: All.

Number of active-duty or reserve brigades in the U.S. considered fully combat ready today: 0 [Speaker of the House Pelosi, 11/07]

In April 2006, the administration’s own director of national intelligence found that “the Iraq conflict has become the ’cause celebre’ for jihadists” and was “shaping a new generation of terrorist leaders and operatives.”

2003: There was no organized al-Qaeda in Iraq. Osama bin Laden himself was disdainful of the country’s none-too-religious dictator, calling Saddam’s Iraq an “apostate regime.”

2008: The Congressional Research Service says that attacks from al-Qaeda-in-Iraq are less than two percent of the violence in Iraq. The State Dept. estimates that al-Qaeda-in-Iraq has fewer than 1,000 members, most of them from other countries. [Wikipedia 08] This doesn’t stop Sen. “Senior-Moment” McCain from routinely asserting it’s us versus al-Qaeda in Iraq. 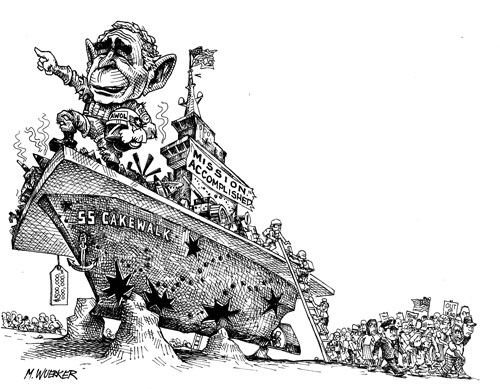 Since Donald Rumsfeld told Fox News back in November 2003 that “we don”t do body counts on other people,” lots of other people have been counting bodies.

A new World Health Organization/ Iraqi government survey estimates that 151,000 Iraqis died from violence in the three years following the U.S.-led invasion of the country.

Over 2.4 million Iraqis have fled their homes for safer areas within Iraq, another 1.5 million are living in Syria, and more than 1 million refugees have fled to Jordan, Iran, Egypt, Lebanon, Turkey, and the Gulf States.

Opinion Research Business, a British polling agency, just completed a survey asking 2,106 Iraqis, “How many members of your household have died as a result of the conflict in Iraq since 2003?”

2001: Nothing. “The Intelligence Community has no credible information that Baghdad had foreknowledge of the 11 September attacks or any other al-Qaeda strike.”[CIA report to Congress, January 2003]

2008: Nothing. “We could never verify that there was any Iraqi authority, direction and control, complicity with al-Qaeda for 9/11 or any operational act against America, period.” [former Director of Central Intelligence George Tenet on 60 Minutes, 4/29/07]

The original “coalition of the willing” in 2003 included Australia, El Salvador, Georgia, Poland, Romania, South Korea, U.S., UK, plus 14 nationswith fewer than 100 personnel each in Iraq.

Electricity in Baghdad remains below prewar levels and unemployment is as high as 50% in many areas. A Red Cross report last month says that many families are spending $50 a month–one third of the average monthly income of $150–just to get clean, safe water. There are currently 172 public hospitals with 30,000 beds, but 80,000 beds are needed. Of the 34,000 doctors registered in 1990, at least 2,500 have been killed and at least 20,000 have left the country.

Bush says: “A nation that was once a safe haven for al Qaeda is now a young democracy.” [SOTU ’08]

Retired Lt. Gen. David Barno, former U.S. commander in Afghanistan, says: [The enemy] “is unquestionably a much stronger force than the enemy we faced in 2004.” [Talk Radio News Service 1/08]

Afghanistan has long been the world’s largest producer of opium, except when the Taliban government banned it in 2001. After the U.S.-led invasion in 2001, poppies made a major comeback and yielded 95% of global heroin. [NYTimes 11/07]

Last month we learned that Secretary of State Condi Rice chaired White House discussions about which torture techniques should be used on prisoners.

These talks “were so detailed” that “some of the interrogation sessions were almost choreographed–down to the number of times CIA agents could use a specific tactic,” said ABC News.

Others in these how-to meetings included Cheney, Rumsfeld, Tenet, Colin Powell, and then-Attorney General John Ashcroft (who said “history will not judge this kindly”). In other words, abusive techniques at Guantanamo and Abu Ghraib were not isolated incidents by a few “bad apples,” but the policy dictates of the best and brightest in the Bush administration.

This was accompanied by a drive to sign up Sunnis who get $300/month if they promise to talk to U.S. military forces instead of killing them. So far, 80,000 Sunnis have signed up to be “concerned local citizens” (our term), calling themselves “Sons of Iraq.”

This buy-off of Sunnis, and the ceasefire called by Shiite cleric Moqtada al-Sadr, account for most of the surge’s supposed success in reducing U.S. and Iraqi casualties.

“I’m saddened that it is politically inconvenient to acknowledge what everyone knows: The Iraq war is largely about oil.” –Alan Greenspan, in his memoir The Age of Turbulence, 2007.

Even though Dick Cheney has always produced an especially nasty sneer at the idea that the occupation of Iraq was for the oil, the battle for control over oil has been waged in lockstep with the battle for Baghdad. Now the latest draft law on Iraq’s oil industry is nearing a vote in that country’s normally dysfunctional parliament.

Our mainstream press tells us that this legislation is all about how the $10 trillion worth of oil reserves will be shared among Shiite, Sunni, Kurd, and Turkmen communities–but the real key is that regardless of how the division of oil proceeds winds up, Western oil giants Exxon-Mobil, Chevron, Eni, Total, and the rest will get the long-term deals for Iraq’s oil, and they will sit at the table with Iraqi officials to make all the decisions on the fate of the world’s second-largest oil fields. BushCheney insist that this wasn’t the goal, but it sure is the prize.

The only goal Bush has set for the USA is to reduce the growth of our greenhouse-gas emissions by 18% by 2012. That’s reducing the growth.

National Geographic says: At the most recent global conference on climate change in Bali, the U.S. was “principally responsible for obstructing progress.”

Over the past five years, the world price of rice–a food staple for three billion people–has tripled to about $700 a ton.

A major reason is the Bush administration’s 2005 mandate to blend 35 billion U.S. gallons of ethanol into gasoline per year by 2017. Ethanol processing now consumes a third of the U.S. corn crop and might eventually use it all to achieve that mandate.

Since the U.S. accounts for 40% of global trade in corn, the detour to biofuels pushes prices up everywhere.

Because agribusiness fattens much of the world’s livestock on corn, the demand for this crop is soaring and farmers are switching to it from wheat. At the same time, the cost of fertilizer made from oil is exploding. As a result, we have a global food crisis: riots over the price of pasta in Italy, over corn in Mexico and Indonesia, and over any food at all in Haiti.

But isn’t all this in a good cause–replacing greenhouse-gas producing fuels with clean biofuel? Maybe, if you make the ethanol from sugar cane as the Brazilians do, but starting with corn winds up using as much energy as it produces, and as much greenhouse gas as oil does.

This “alternative” fuel push, and the global food-price explosion, is brought to us courtesy of the powerful U.S. corn and sugar lobbies, their friends in Congress, and the White House. And by our fossil-fuel economy, which would rather promote a “new oil”–such as ethanol–than retool our society around conservation and renewables.

2001: Bush’s solution to the dot.com-bust recession was to give a huge tax break to the richest citizens and cut interest rates to 1%, hoping that American industry would invest in production and we’d all get booming.

2002-2006: Industry didn’t invest, at least not in the USA. But banks grabbed the low-cost money and offered easy-entry mortgages, which induced homeowners to borrow and spend.

2008: Wall Street geniuses had bundled all those shaky mortgages with more valuable IOUs and sold these bundles around the world. Banks and mortgage lenders in dozens of countries discovered that billions, perhaps trillions, of the U.S.-originated IOUs they hold are worth bupkus.

While Wall Street was exporting those poisoned security packages, Bush & Co. were financing the Iraq adventure on credit. They increased the federal government’s debt, which stood at $5.7 trillion when Bush took office, to a staggering $9.4 trillion.

Over half of this sum is owed to individuals, corporations, and foreign governments.

The rest is owed by the government to itself, most of it to Social Security and other trust funds, which have been running surpluses. (Bush, like previous presidents, says Social Security is broke! That’s because they spent the money.) 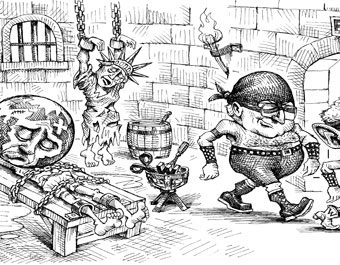