Where Bush’s arrogance has taken us

Living under the imperial presidency

DURING HIS GUBERNATORIAL DAYS IN TEXAS, George W let slip a one-sentence thought that unintentionally gave us a peek into his political soul. In hindsight, it should’ve been loudly broadcast all across our land so people could’ve absorbed it, contemplated its portent…and roundly rejected the guy’s bid for the presidency. On May 21, 1999, reacting to some satirical criticism of him, Bush snapped: “There ought to be limits to freedom.”

Gosh, so many freedoms to limit, so little time! But in five short years, the BushCheneyRummy regime has made remarkable strides toward dismembering the genius of the Founders, going at our Constitution and Bill of Rights like famished alligators chasing a couple of poodles.

Forget about such niceties as separation of powers, checks and balances (crucial to the practice of democracy), the First Amendment, the Fourth Amendment, and open government — these guys are on an autocratic tear. Whenever they’ve been challenged (all too rarely), they simply shout “war on terror,” commander-in-chief,” “support our troops,” “executive privilege,” “I’m the decider,” or some other slam-the-door political phrase designed to silence any opposition.

Indeed, opponents are branded “enemies” who must be demonized, personally attacked, and, if possible, destroyed. Bush’s find-the-loopholes lawyers assert that a president has the right to lie (even about going to war), to imprison people indefinitely (without charges, lawyers, hearings, courts, or hope), to torture people, to spy on Americans without court or congressional review, to prosecute reporters who dare to report, to rewrite laws on executive whim…and on and on.

While terrorists can do some physical harm to America, they cannot impose a supraconstitutional executive on us, they cannot draw a dark curtain of secrecy around executive actions, they cannot enthrone executive power — they cannot alter the very nature of America’s historic democratic experiment. But our own leaders (not only the White House, but also a compliant Congress, a mealy mouthed Democratic opposition, jittery judges, and a lethargic media) can do all of this…and they are.

Ultimately, though, this is about us, about each of us doing what we can, where we can, to spread the word, to foment opposition, to embolden Congress and the media, to organize everyone within our reach to rebel against the extraordinary Bushite power grab.

We must remind ourselves and all of those around us that democracy is not a given in our “Land of the Free” — it is always fragile, always under assault by governmental and corporate elites trying to seize more power and wealth for their own interests. The media establishment will occasionally produce a piece here and a piece there about this assault, but to give you Lowdowners a sense of the enormity of what Bush & Company are doing under the cloak of war and executive privilege, we’ve put together a fold-out poster for you in this issue.

Please use this issue like the broadsheets and pamphlets that were printed and spread around by the likes of Thomas Paine in the formative days of America’s democratic rebellion. Post it up, email it, blog it…use it! 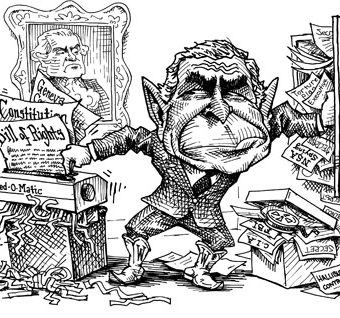