Where have all the issues gone?

What they’re not talking about in campaign 2000

Well, there we have it: Gore-Bush. Dull versus dullard. The political establishments of the two-party duopoly successfully rose up to surround, defend, and shove forward their chosen ones, both girded with tens of millions of dollars from the exact same sources of corrupt corporate money.

This means that the kitchen-table issues that actually matter to us will not even be on the table for discussion, since the money masters of the GoreBush travelling medicine show have decreed that their candidates must not disturb the populace with any questioning of the conventional wisdom and corporate order. Instead, Gore and Bush offer “Election2000: A Space Odyssey”¯completely out of touch with the real life of our country’s workaday majority. Here are a few examples of what the Democrat and Republican will NOT be discussing:

#1: The Mugging of the Middle Class

Al and George are in perfect harmony on the prosperity theme, with each assuring voters that they will dutifully extend America’s razzle-dazzle, Wall Street-driven economic”Boom”! Both are, totally tone deaf to the chorus of America’s majority asking: A boom for whom? Real wages are lower today than when Nixon was president. Eight-out-of-ten families have seen their incomes go flat or go down in this period of so-called prosperity. More than90 percent of the gains in stock wealth have gone to the wealthiest 10 percent of families. Farm bankruptcies, corporate downsizings, and family debt are setting new records. Why is this gritty reality not being raised¯at least by the “Democrat”?

Rather than reaching out to the middle class, Gore and Bush are in agreement to continue the mugging¯both support tax and trade programs that subsidize more downsizings and exporting of U.S. jobs, both favor using immigration policy to allow high-tech companies to import cheap computer engineers and programmers to take the majority ofour high-tech jobs and undercut the salary scale for the whole industry, and both fawn over Alan Greenspan, favoring his reappointment as chairman of the Federal Reserve Board, from whence he pursues a relentless policy of depressing wages.

#2: Return of the Robber Barons

In a greed-grab more feverish than a gold rush, every industry in our country is being consolidated, concentrated, and conglomerated by huge corporations merging with each other to form entities with names like Global Goliath Megahugecorp, Inc. The bottom-line is a rapid shrinking of competition and a radical rise in monopoly power affecting our jobs, health care, the news we’re fed, and much, much more.

The CEOs, with wide, toothy grins, rationalize their mergers in terms of “consumer benefits.” Do we look like we have sucker wrappers around our heads? Is your bank a better place, is your cable-tv bill lower, is your medical care better, is your air travel friendlier, is the nightly news any newsier . .. as the result of these rampant consolidations?

A handful of corporate and investor elites enjoy a golden windfall from the mergers; everyone else loses¯workers, consumers, taxpayers, small businesses, communities, small shareholders . .. everyone. Yet this avaricious and destructive re-ordering of America’s economic structure is being done with no public discussion, much less a challenge. Instead of Teddy Roosevelt or “Fighting Bob” Lafollette, we get Al and George taking millions ofcampaign dollars from the merging barons and, like the monkeys, seeing, hearing, and speaking no evil.

Corporate globalization is nothing but Ronald Reagan’s trickle-down economics writ large—if we simply unleash the Great Stallions of Global Corporate Power, we’re told, then By Gipper, these beneficent beasts will naturally produce enormous wealth, put a Lexus in every peasant’s garage, cause every brutish and bloody dictatorship to dissolve into utopian democracies, cure genital herpes, eliminate halitosis worldwide, and let everyone have a Nike swoosh on their clothing.

Only it hasn’t quite worked out this way. Instead, the U.S. has lost hundreds of thousands of good jobs, as our corporate stallions have stampeded to poverty-stricken nations to take advantage of powerless and dirt-cheap labor; the secret, autocratic, corporate controlled tribunals set up by NAFTA and the WTO to enforce this global rapaciousness have been empowered, without our knowledge or consent, to over-rule our national, state, and local laws, thereby stealing our most fundamental right: self-government(see Lowdown, March ’99 and January ’00).

Neither Gore nor Bush will question this outrage. Au contraire, Bubba, both worship at the holy alter of globaloney and insist on staying the course, a course paved with the golden bricks of their campaign funders.

It doesn’t get much more stupid than this political boondoggle that wastes $50 million of our tax money each year, that imprisons half-a-million of our citizens for nothing but simple possession or low-level dealing, that allows police at all levels to seize the private property (cars, homes, cash, tupper ware, everything) of even innocent citizens, that results in unconstitutional profiling and searches of innocent citizens, that prevents U.S. farmers

from being able to grow profitable and environmentally-sound fields of industrial hemp(see Lowdown, May ’99), that has our military spending nearly a billion bucks a year to intervene (on the wrong side) in a civil war in Colombia . . . and et cetera ad nauseum.

Democrat Gore has not piped up in opposition to any of these absurdities, and Republican Bush says he wants to get more repressive and spendmore on such madness, so the presidential “debate” will ignore afailed drug policy that is doing deep damage to our people, ourconstitution, and what’s left of the government’s credibility.

Both talk only about federal income taxes, deliberately diverting any public attention from the tax that most burdens the majority of working Americans: the payroll tax. This tax 7 1/2 percent of the gross income of anyone making up to $78,000 a year (15% if you’re self-employed). If you make more than this—even if like Bill Gates and others you make millions more than this each year—you’re still taxed only on your first $78,000 in income. Why should 100% of a working stiff’s income be taxed, but only 1% of Gates’ income take a hit? Why not start the payroll tax at $78,000, rather than capping it there, thus freeing working families from these regressive taxes and putting the burden on the most privileged citizens? Now there’s a real tax-cut debate!

Other possibilities are an international currency-exchange tax on corporations and speculators, and a transactions tax on all short-term stock sales, thus taxing speculation and allowing a zeroing-out of income tax on the labor of people making, say, less than $30,000 a year. There are also good suggestions for a pollution and natural resources tax, applying a progressive rate that climbs according to the amount of pollution you cause and the resources you consume.

But these ideas would require a boldness and ingenuity that cannot come from two candidates shackled to the very moneyed interests that profit from today’s regressive tax policies, leaving the candidates to think small and pick nits.

This time, Gore is a health-care minimalist, offering a plan that possibly, maybe, might-could-but-don’t-hold-me-to-it cover about one-eighth of the citizens in need. Bush wouldn’t go so far.

Missing entirely is the debate we ultimately must have, which is to create an American version of Canada’s single-payer system—the only way to provide health care for all, cut costs, and improve both service and health. Big surprise: Both parties are butt deep in campaign funds from HMOs and insurance giants, the profiteers that would be the only losers in a single-payer plan.

#7: The money corruption of politics and government

Gore and bush are shameless poseurs on the reform issue, cynically prancing on the far edges of reform, while neither they nor their parties want even the modest changes they’re willing to talk about. Both are locked onto the matter of “soft money,” the unlimited millions that corporations and unions give to the political parties (though overwhelmingly it’s corporate cash that plays in the soft money game). Gore would outlaw soft money, and Bush would outlaw it for corporations and unions, but allow CEOs, fat cat investors, and other individuals to continue pumping millions through the soft-money loophole.

Not a whisper do we get from these two reform frauds on public financing of all elections, which is the one way we finally could get the corrupting private money out of the process. If you want public policy to reflect genuine public interest, rather than private interests, we’ve got to fund the democratic process publicly.

Doing this closes all loopholes for special-interest money, but it does something else that might be even more important—it allows regular people to run for office again, since a teacher, small farmer, retail clerk, cab driver, or whomever could get access to the same pool of public campaign funds that incumbents and the elites would have. Already, Arizona, Maine, Massachusetts, and Vermont have passed state laws for public financing, while Connecticut, Missouri, and Oregon will vote on it this year. Why not a national debate?

The good news is that GoreBush can run, but they can’t hide from these issues.

Among other legitimate third-party candidates who will be actively raising some of them, Ralph Nader already is on the hustings talking about all of these and more as he campaigns for the Green Party presidential nomination.

Ralph will be a contender¯he will have been in all 50 states by June 1,he will raise at least $5 million to finance a grassroots campaign, he and his volunteers will qualify the Greens for the ballot in 40 to 50 states, he has an experienced political staff on the job (campaign manager, field director, fund raiser, press aide, scheduler, web master, et al), he has top legal minds already working to put him into this fall’s debates with Gore and Bush . . . and he’s going to go right into the face of power as only Ralph can do, rallying disaffected voters and the young, filling in what’s been missing in Campaign 2000.

I’m excited about his run.

WHY AL AND GEORGE SING IN PERFECT HARMONY FROM THE CORPORATE SONGBOOK
66 Corporations That Have Put At Least $50,000 Into Both The Gore and Bush Campaigns 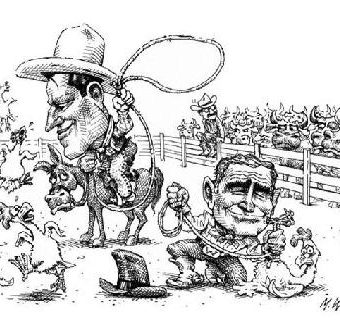