Who is the Tea Party Congress?

Seems like this would be an easy question to answer, but it turns out that we could find no group, including the tea party’s own organizations, that has made a complete list, or at least they’ve not made one public. So, the Lowdown’s ace fact diggers dug out the names themselves, presented below in three categories for everyone’s political edification.

I. Endorsed and elected as tea partiers in 2010

Note that there is no such thing as the Tea Party. The movement has no formal political entity for holding primaries or conventions, nor does the tea party name appear on general election ballots. Instead, “official” tea party candidates are those who’re endorsed by FreedomWorks or the Tea Party Express–both of which are creatures of Dick Armey and his billionaire backers. Last year was the first congressional election with candidates endorsed as “tea partiers” and at least 26 of them won, all elected as Republicans. There may be more, but these are the ones we could find–if you know of others, please send their names (along with any backup material attesting to their tea partiness) to lowdown@pipeline.com.

Formed early this year by Rep. Michele Bachmann, who chairs it, the caucus is open to all lawmakers who want to wear the tea party label (interestingly, about two dozen of the tea party-endorsed candidates who won last year have chosen not to join Bachmann’s group). There are 61 members in the House caucus, plus four members of a Senate caucus. All are Republicans.

These are GOP lawmakers who were not tea party endorsees and are not in the caucus, but they provide the margin of votes and the hard-right leadership in Congress to push the extremist laissez-faire agenda forward. It includes many of the committee chairs and other leaders in the House. There is no definitive list of these players (much of this action is behind closed doors), but Majority Leader Eric Cantor of Virginia and Jim Jordan of Ohio (chair of the GOP’s powerful “study committee”) have been the most aggressive House allies, helping the tea partiers shove the GOP’s congressional center to the far-right fringe. In addition, all eight Republicans running for president are allies, with the likes of Bachmann, Perry, and Santorum often scuttling beyond the fringe in a frenetic but unabashed effort to appeal to the kookiest of right-wing factions. 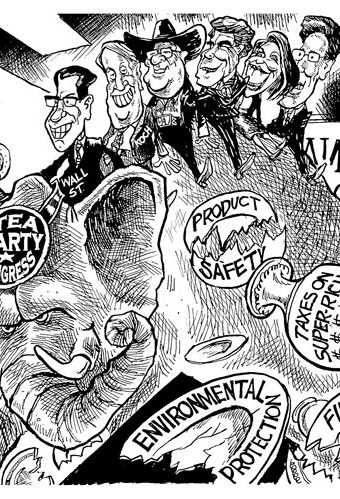