Why keep an expensive, illegal, invasive spy program that doesn’t even work?

A critic of President Obama’s policy of allowing everyone’s electronic communications to be dumped into the NSA’s computer netherworld recently said: “Given the unique power of the state, it is not enough for leaders to say, ‘Trust us. We won’t abuse what we collect.'”

Oh, wait. That wasn’t a critic speaking–it was Obama himself in his January speech on the NSA’s overreach! He was trying to shush critics by insisting that the threadbare slipcover of reforms he was throwing over the massive spy machine should satisfy us that all is well–so please, people, just go back to sleep.

Yet less than a week later, a blaring alarm in Washington shook off any drowsiness that Obama might have induced. The alert came from a small, previously unheard-from federal agency called the Privacy and Civil Liberties Oversight Board, set up by congress back in 2007 to be an independent monitor of the spook establishment’s privacy infringements.

In a stunningly blunt 238-page report, the five-member panel of legal experts concluded that the NSA’s bulk data collection is illegal, probably unconstitutional under the First and Fourth Amendments, a serious, ongoing threat to Americans’ privacy and liberties–and is essentially useless at stopping terrorist acts.

“As a result,” wrote the PCLOB majority, “the board recommends that the government end the program.”

Especially telling is the finding that the NSA’s invasive phone sweeps are ineffective at fighting terrorism. The agency and its apologists keep claiming–without any proof–that total vacuuming of domestic communications is necessary to prevent the next 9-11 attack. But the panel did an in-depth analysis of this repeated assertion and wrote: “We have not identified a single instance involving a threat to the United States in which the telephone records program made a concrete difference.” 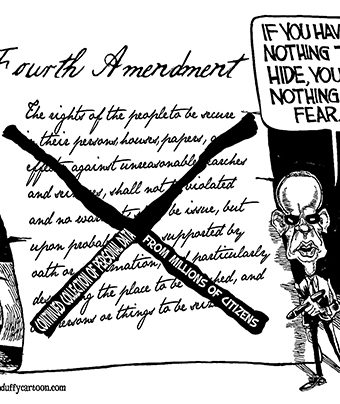