How can a CEO feel good about being vile? 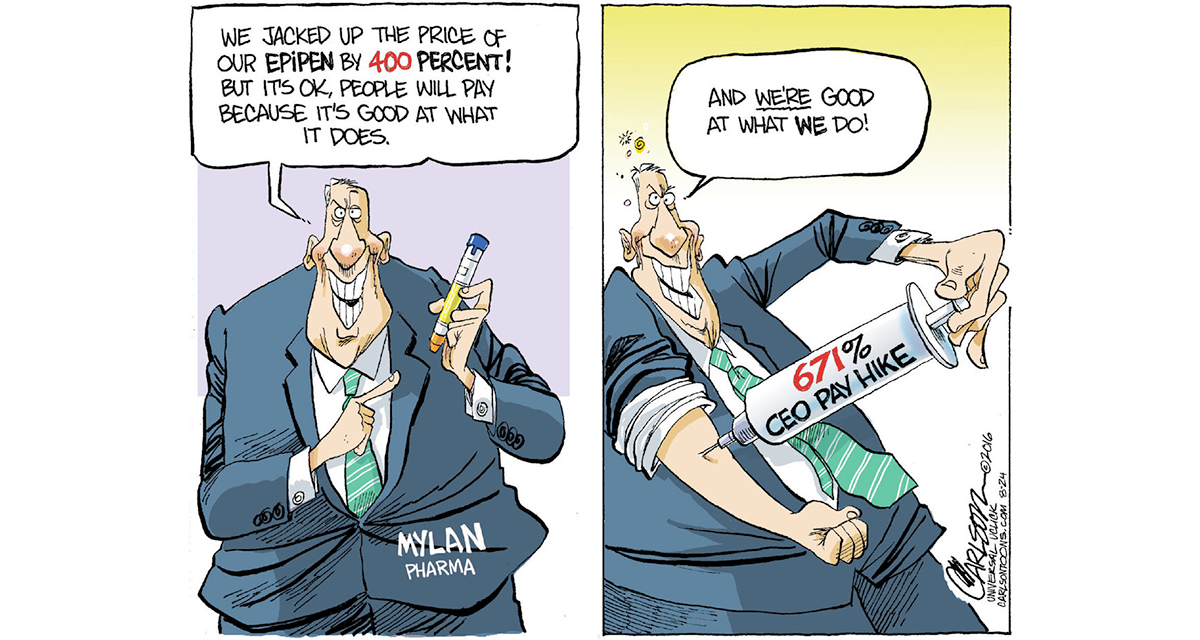 Jim Hightower's Radio Lowdown
How can a CEO feel good about being vile?

Corporate price gouging is never nice. But gouging people on the price of medicines they rely on to stay alive is worse than not nice – it’s predaceously evil.

And if you think corporate morality can’t go lower than that, how about gouging people on the price of a life-saving medicine in order to jack-up the personal pay of a drug maker’s CEO? That’s the level of grotesque immorality where Heather Bresch dwells. She is chief executive of Mylan, a pharmaceutical profiteer that markets the EpiPen medical device, which literally is a lifesaver for people who suffer deadly allergy attacks.

For years, a two-shot packet of EpiPens cost under $100, but Mylan bought the rights to the injectable drug in 2007, gained monopoly control of the market, and in 2012 suddenly began sticking dependent patients again and again with drastic price hikes. Now, the two-pack averages more than $600, with some paying above $900!

Drug makers routinely claim they must charge high prices to recoup their cost of developing their products – but Mylan didn’t develop the EpiPen, we taxpayers did. The original research was initiated by the Pentagon back in 1973. Today, the device and the medicine in it cost Mylan only a few dollars to produce, and the product itself is essentially unchanged from when Mylan bought it. So the company’s only real contribution to the EpiPen has been to raise its price by more than 600 percent – a shameful act of sheer profiteering that rips off hundreds of thousands of users and endangers the lives of severe allergy sufferers  who simply can’t afford Mylan’s extortion price.

But one thing has risen higher than EpiPen’s price: CEO Heather Bresch’s paycheck. It’s up by 671 percent since 2007, and last year alone she pocketed $18.9 million! But I wonder – is that enough to make her feel good about being so vile?

“The strange history of the EpiPen, the device developed by the military that turned into a billion-dollar business,” Business Insider, August 27, 2016.

“The Story if the EpiPen: From Military Technology to drug-industry cash cow,” Timeline, August 24, 2016.