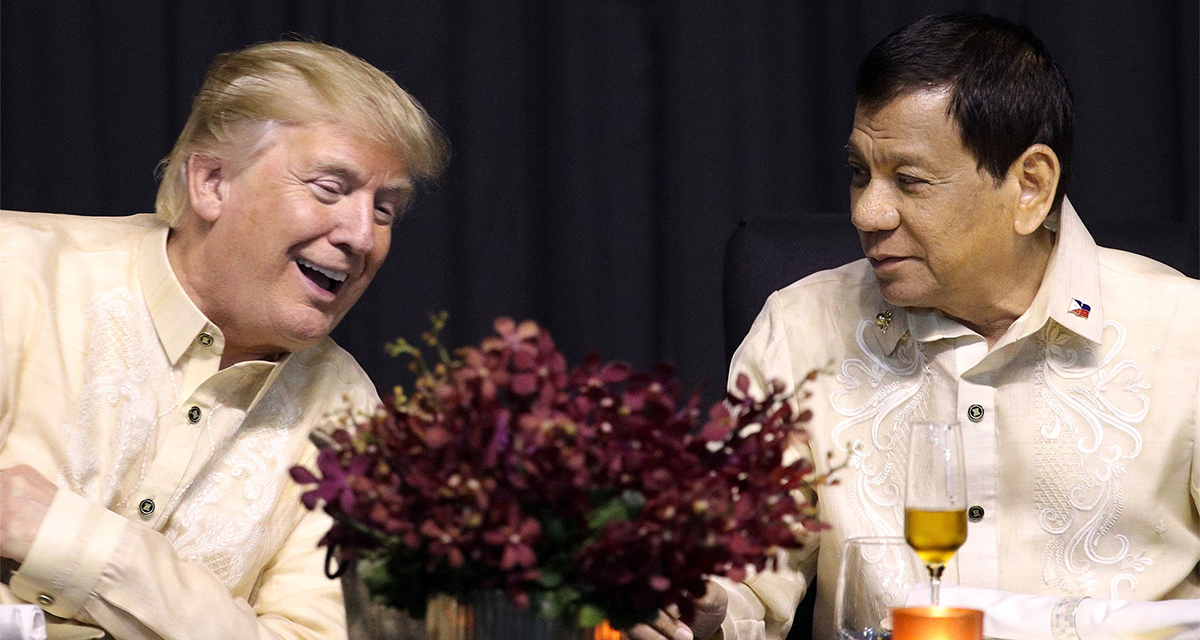 “We’ve had a great relationship,” exulted a giddy Donald Trump, following his two-day schmoozefest in Manila with the thuggish Philippine president, Rodrigo Duterte.

Duterte, who calls himself a “toughie,” brags that he’s personally killed many people and likes to compare himself to Satan. He’s been on a murderous rampage since his election last year. In the name of eliminating the drug trade, he has unleashed a massive military assault across the country, not merely targeting dealers, but also people using drugs. His onslaught is a human rights atrocity, with untold thousands essentially being executed in what are antiseptically termed “extra judicial killings” – ie, illegal, unjustified… murderous.

Yet, the present President of the United States says Duterte is his new buddy, and Trump stressed in their official discussions that the Philippine president can count on him and the US (which includes you and me) to be a friend. And, as a friend, Trump didn’t bother his authoritarian buddy with any unpleasant talk about those rampant human rights abuses.

Instead, the Duterte-Trump get-together was one of mutual praise and even affection. Indeed, Donald was delighted when Rodrigo impulsively grabbed the microphone at a gala state dinner and serenaded Trump with a love ballad, crooning: “You are the love I’ve been waiting for.”

In fact, Duterte had earlier demonstrated that love when he named Jose Antonio to be his trade representative to our country. Antonio, a Philippine real estate mogul, happens to be a partner with our president in the luxurious new Trump Tower, now under construction in Manila. Cozy, huh?

Hugging up the Manila Satan might be good business for Trump, but it’s a sorry deal for our national interest – and it’s an insult to our people’s support of human rights.

“Trump and Philippine President Hit It Off In Manila, With Barely a Mention of Human Rights,” The New York Times, November 14, 2017.