How a foreign Beer conglomerate pulled a coup on “America” 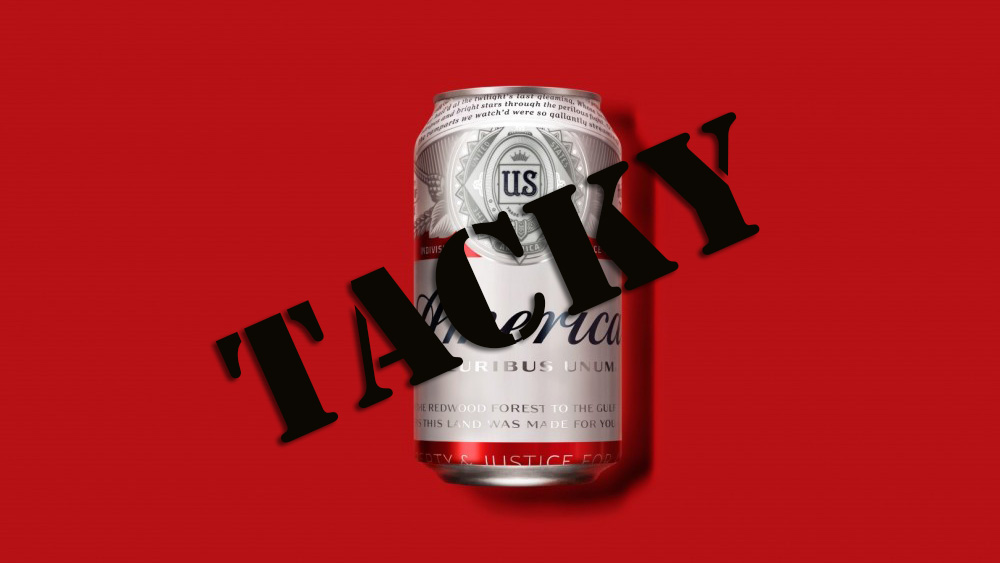 Is anything too tacky, too shameful for corporate advertisers to exploit? I mean, anything?

Of course, ad-makers get almost pornographic in using sex to sell stuff, but sexploitation almost seems tasteful compared to Budweiser’s latest gambit to grab American patriotism as its personal marketing mechanism. I realize that our flag has long been unfurled to sell everything from guns to toilet paper, but Budweiser is not merely wrapping itself in the Stars & Stripes – it is literally claiming to be America.

How? By usurping the very name of our country! For the next six months, this imperious corporation is grandiosely rebranding its brew as: “America.” Patriotism, you see, is just another name for profit, and Bud’s top executives see the coming months – including July 4th, the Olympics, and even our presidential election – as one long season for us to salute their flag of crass commercialism. “You have this wave of patriotism that is going to go up and down throughout the summertime,” explains the conglomerate’s PR huckster, “and we found with Budweiser such a beautiful angle to play on that sentiment.”

And play on it they are, shamelessly plucking our patriotic heartstrings by plastering every 12-ounce can of “America” with such iconic symbols of Americana as “E Pluribus Unum,” “Land of the Free” and “Home of the Brave,” the opening stanza of our national anthem, plus a verse lifted from Woody Guthrie’s “This Land is Your Land.”

Imagine how proud George Washington and the revolutionaries of 1776 would be to see that this is what their democratic idealism and struggle has come to: An ad campaign for a beer corporation. Indeed, a foreign corporation – Budweiser (now America) is owned by a Brazilian consortium and headquartered in Belgium. Happy Independence Day, America!