Why is the GOP pushing such a stinky tax bill? 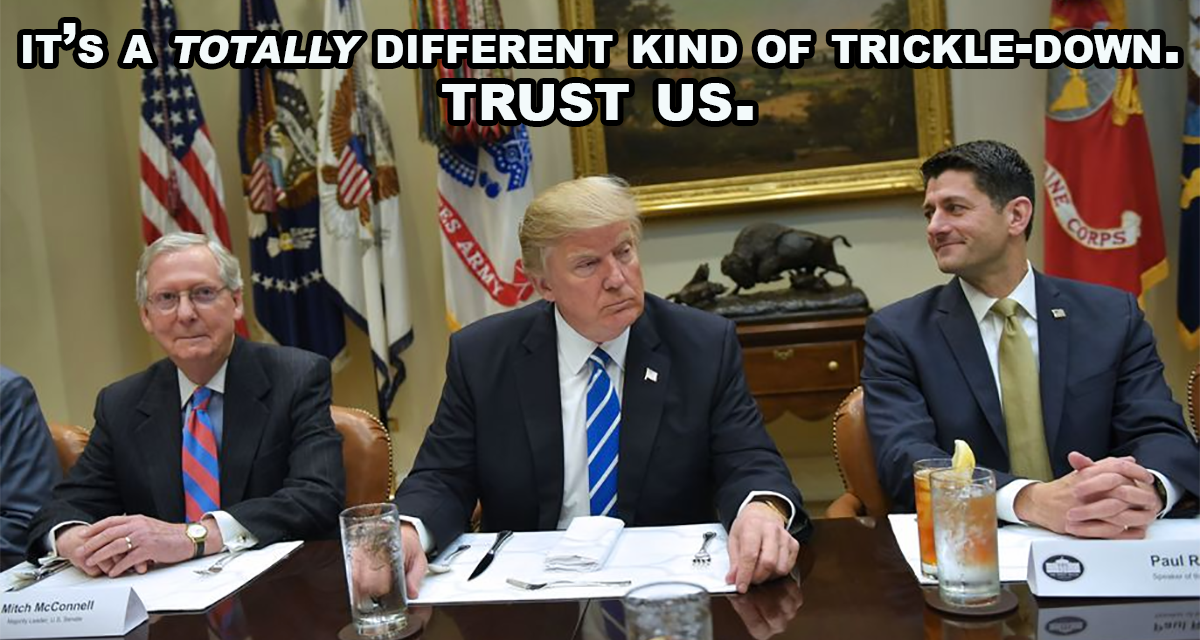 Jim Hightower's Radio Lowdown
Why is the GOP pushing such a stinky tax bill?

Sam Rayburn, a legendary Speaker of the US House in the 1940s and ’50s, offered this piece of ethical advice for lawmakers who were conflicted over whether to vote for the People or the lobbyists: “Every now and then,” he said, “a politician ought to do something just because it’s right.”

Wow, ethics – how quaint! Today’s House Speaker, Paul Ryan, has perverted Rayburn’s ethics, advising his Republican majority to vote for anything just because it’s right-wing. Along with Donald Trump and Senate leader Mitch McConnell, Ryan is now trying to push America’s tax law so far to the right that it’s horribly wrong.

Tax proposals can be complex, but this 429-page monster is shockingly easy to understand: The Trump-Ryan-McConnell triumvirate intends to take money from millions of working families and give it to the world’s wealthiest people and richest multinational corporations.

Of course, when they talk publicly about their proposal, they claim it’s all about “helping” you working stiffs. It’s “real tax reform for everyday hardworking Americans,” trumpeted our president. In private, though, they reveal to their biggest campaign donors that the plan lets them “help themselves” to the People’s money, giving these corporate elites a huge windfall – “the biggest ever,” bragged Trump. In fact, the 400 richest families in America would average $5.5 million in new tax breaks. Meanwhile, if your income is under $75,000 a year, you’ll end up worse off.

Forget trickle-down economics, the GOP is practicing tinkle-down economics! Why would they push such an evil, shameful policy? Because it’s not you common voters they care about, it’s the moneyed elites who fund their re-election campaigns. As one Republican pusher of this tax giveaway to the rich put it: “My donors are basically saying: ‘Get it done or don’t ever call me again.'”

“The GOP finally unveiled its massive tax plan that proposes a sweeping overhaul to the system,” Business Insider, November 2, 2017.