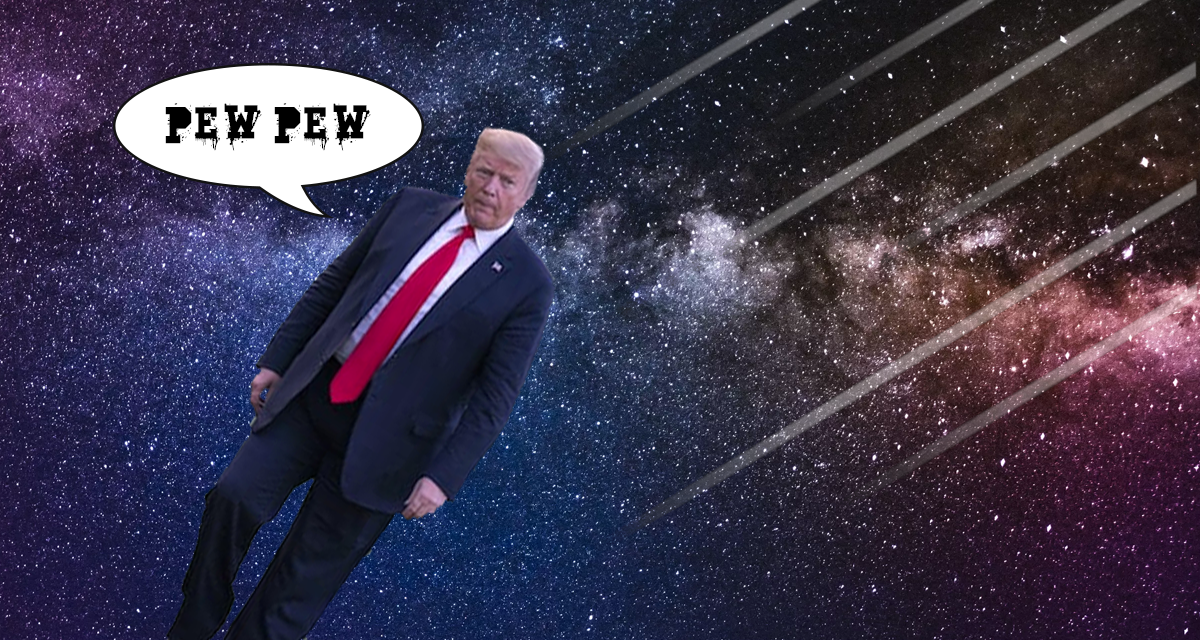 If you think our government’s war policy has become out-of-this world cuckoo – consider the spaciness being proposed by the cosmonauts on Spaceship Trump.

Spending nearly $700 billion a year on maintaining the five branches of the US war machine (not counting the costs of actually fighting all the wars they get into) is not enough they now tell us. So prepare to soar – militarily and budgetarily – into a boundless war theater where none have gone before: Yes, outer space!

It seems that Captain Trump himself woke up one morning in June and abruptly announced that he was bored with the fusty old Army, Air Force, etc., so he wanted a shiny new sixth military branch to play with [space music sound effects] – a “Space Force” to carry America’s war-making power to a cosmic level. His loyal lieutenant, Mike “Yes-Man” Pence promptly saluted, calling Trump’s whim “an idea whose time has come.” America’s military leaders rolled their eyes at this folly, but they’ve since snapped to attention and are preparing to launch Cap’n Trump’s grandiose space dreams.

In a melodramatic speech, Pence declared that the new Space Command will “seek peace, in space as on Earth.” Hmmm… that’s not very comforting. However, he says he’s thrilled that Trump’s Space Force will be led by a four-star general, have its own bureaucracy with a multibillion-dollar budget, have a separate division to funnel money to corporate war contractors, and have its own snappy uniforms. Won’t all that look great if Trump ever gets that big showy military parade he’s been demanding as a tribute to his leadership as a cocktail-room warrior.

The Trumpeteers gush that this extraplanetary extravagance will attract “America’s best and bravest” to serve as “warfighters.” Of course, their privileged families won’t have to fight in any of the space wars they’re dreaming up for other families to fight.