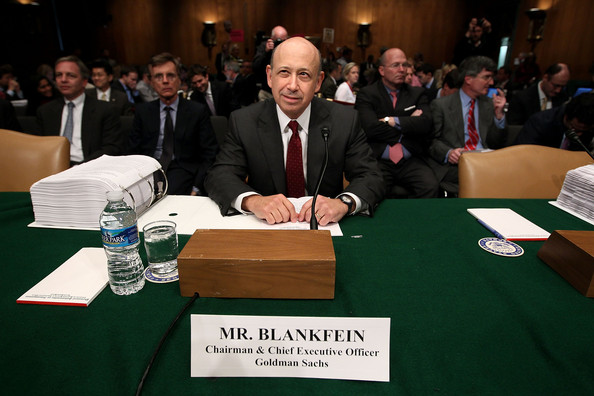 CorporateSpeak is an inane language that conveys seriousness without any sincerity.

Consider this example from Goldman Sachs: “We are pleased to put these legacy matters behind us. Since the financial crisis, we have taken significant steps to strengthen our culture, reinforce our commitment to our clients and ensure our governance processes are robust.” This is Goldman’s rhetorical attempt to cleanse itself of the massive fraud it committed in selling tens of billions of dollars in worthless mortgage investments to its clients, contributing to the crash of our economy in 2008.

For its criminality, the Justice Department has now spanked Goldman Sachs with a stinging $5 billion penalty. But what lesson have the haughty banksters learned? Well, let’s parse that two-sentence Orwellian comment they issued. First, they term their crimes “legacy matters,” which means something from the past, implying that the bad was done by some previous regime. But – hello – the top executives who oversaw and profited from that criminal enterprise are still there, still in charge.

Then, the PR statement refers vaguely to a “crisis,” as though it was not one the bankers caused. Next, they refer to strengthening “our culture,” rather than calling it what it was: A corporate-wide mindset of anything-goes avarice. That culture needs to be eliminated, not strengthened, replacing it with common kindergarten ethics of fair play. Finally, they assert that we should believe that their self-governance processes are now “robust.”

Ha! “Self-governance” is Wall Street’s word for freedom to steal. And if you believe a $5 billion penalty will deter them, note that Goldman and the rest are robustly lobbying Congress to kill regulations that restrain their future criminality. Watch what they do, not what they say.