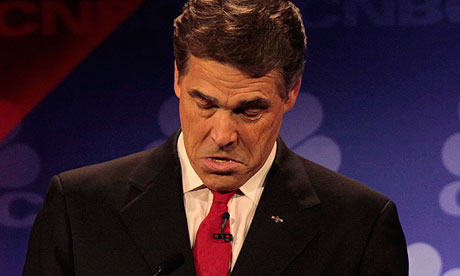 Early this year, former-Gov. Rick “Oops” Perry was strutting around the country bragging about the “Texas Economic Miracle” he says he created. The only miracle, however, was that he actually fooled some people into believing his flimflam.

Perry claimed that he had generated a million new jobs in the state through a little agency that he controlled, called the Texas Enterprise Fund. It doled out millions of taxpayer dollars to corporations, subsidizing them to relocate or expand in Texas, in exchange for them increasing their workforce.

But – oops! – a 2014 audit found that the fund was a crony capitalism scam, with much of the state money going to Perry campaign donors, and with little enforcement of the job-creation pledges.

In 2013, for example, the beaming “miracle worker” announced that he’d cut a deal with Chevron to build a 50-story office tower in Houston – the state would put up $12 million and Chevron would hire 1,700 new employees to work there. Three years later, Perry’s gone, the “tower” is nothing but a vacant lot, Chevron says it “does not anticipate building a new office in Houston,” and a recent investigation by the Texas Tribune found that the oil giant has eliminated 1,500 jobs in Houston during the past year. Indeed, it appears to employ fewer Houstonians today than when the deal was cut.

Yet, incredibly, Perry’s successor insists Chevron is in full compliance with its Enterprise Fund agreement. How can that be? Because Gov. Miracle filled the agreement with weasel words that effectively allow the corporation to claim job creation… while actually cutting jobs.

Now that really is a miracle! And, of course, a fraud. But that’s what corporate welfare is, whether it comes from Washington, your state capital, or your city hall. To help stop the flimflammers, connect with www.goodjobsfirst.org.