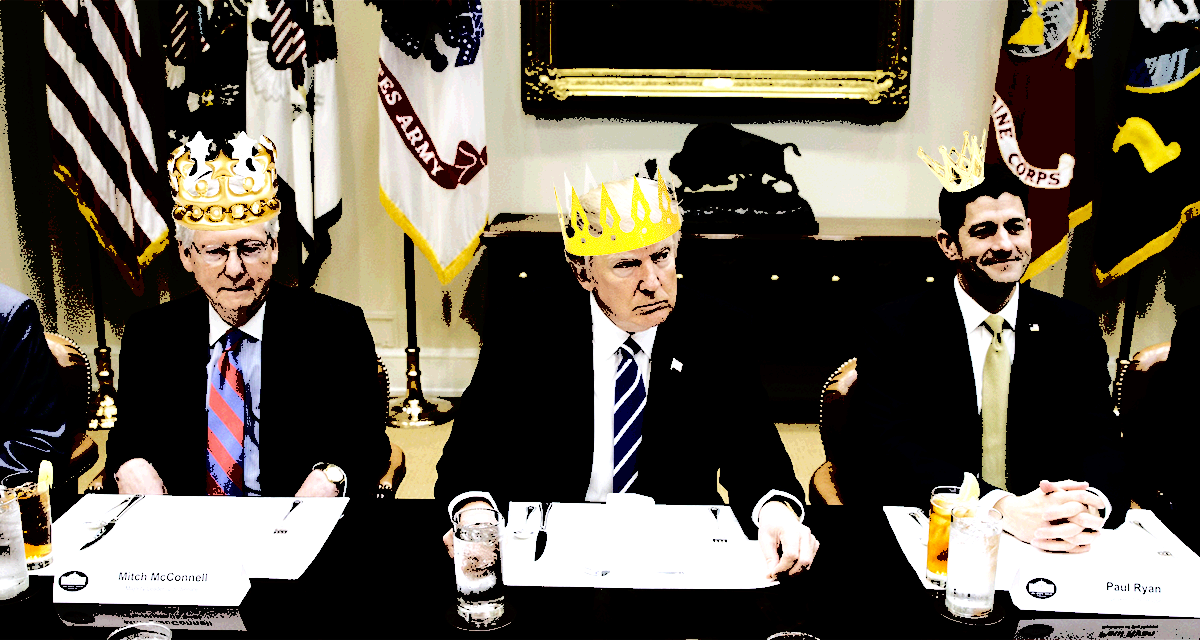 As the royal triumvirate of Donald Trump, Paul Ryan, and Mitch McConnell continue their perverse quest to turn our America into a gold-plated Trumplandistan for oligarchs, they keep insisting that their blatantly-elitist schemes will magically elevate the middle class and even the poor, delivering a 7-course-dinner to everyone!

Yeah, right – as we’ve now seen from their totally-regressive new tax law, your and my seven-course dinner turns out to be a six-pack and a possum. In fact, as the non-partisan Tax Policy Center reports, 10 years from now, 83 percent of the benefits in the Trump-Ryan-McConnell tax act will be flowing to the wealthiest families, while more than half of America’s middle-income and poor people will actually see their taxes rise during the next decade.

Meanwhile, this egregious giveaway to undeserving corporate elites will add as much as one-and-a-half trillion dollars to the federal deficit. No problem, says the slap-happy triumvirate, for we have a plan to cover the cost of these lavish tax cuts we’ve given to the royals (including cuts for the gilded Trump family, which just happens to be one of the act’s top beneficiaries). As Trump himself explained the plan: “We’re going to go into welfare reform.” Yes, the plan is to cut such essential safety net programs as children’s health care, food stamps, jobless programs, and – as Ryan now publicly admits, they intend to cut your and my Medicare and Social Security.

What we have here is plutocracy in action – the precious few are intentionally knocking down and locking down the many to further enrich themselves. This is why the social cancer of inequality is spreading so rampantly in America, devouring the very middle class that Trump & Company are using – ironically and cynically – as an Orwellian rationale for passing their plutocratic agenda.