Who was Smedley Darlington Butler, and why is he important? 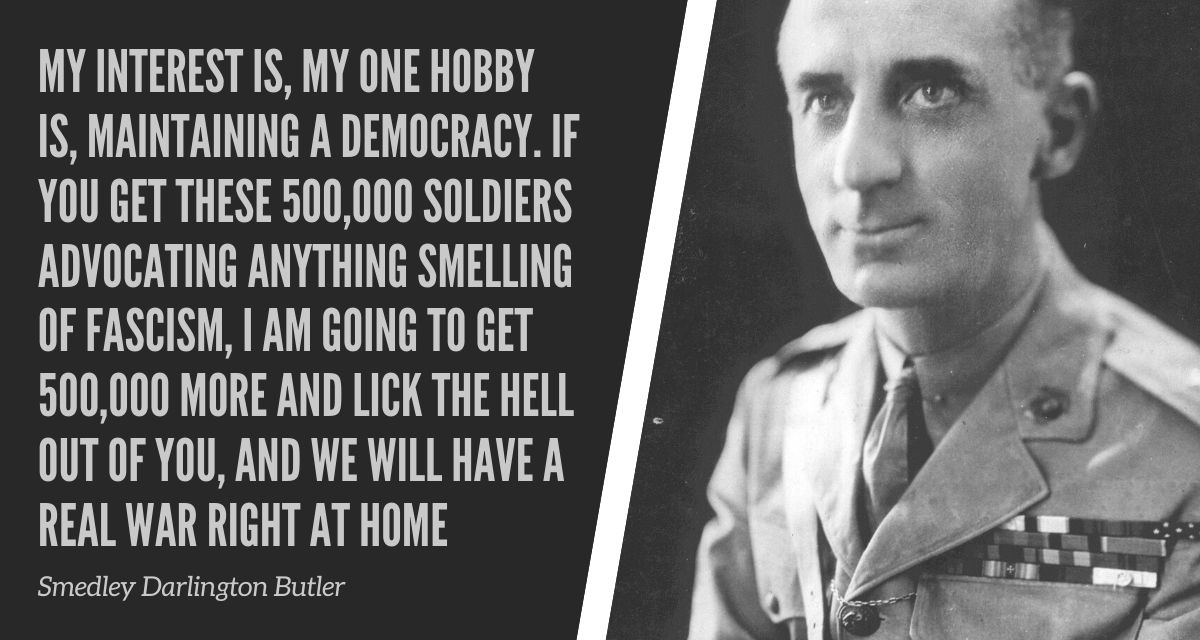 Jim Hightower's Radio Lowdown
Who was Smedley Darlington Butler, and why is he important?

Many Americans can’t believe that political coups are part of our country’s history – but consider from the Wall Street Putsch of 1933.

Never heard of it? It was a corporate conspiracy to oust Franklin D. Roosevelt, who had just been elected president. With the Great Depression raging and millions of families financially devastated, FDR had launched several economic recovery programs to help people get back on their feet. To pay for this crucial effort, he had the audacity to raise taxes on the wealthy, and this enraged a group of Wall Street multimillionaires.

Wailing that their “liberty” to grab as much wealth as possible was being shackled, they accused the president of mounting a Class War. To pull off their coup, they plotted to enlist a private military force made up of destitute World War I vets who were upset at not receiving promised federal bonus payments. One of the multimillionaires’ lackeys reached out to a well-respected advocate for veterans: Retired Marine general, Smedley Darlington Butler. They wanted him to lead 500,000 veterans in a march on Washington to force FDR from the White House.

They chose the wrong general. Butler was a patriot and lifelong soldier for democracy, who, in his later years, was critical of corporate war profiteering, and he was repulsed by the hubris and treachery of these Wall Street aristocrats. He reached out to a reporter, and together, they gathered proof to to take to Congress. A special congressional committee investigated and found Butler’s story “alarmingly true,” leading to public hearings, with Butler giving detailed testimony.

This is Jim Hightower saying… By exposing the traitors, this courageous patriot nipped their coup in the bud. But their sense of entitlement reveals that we must be aware of the concentrated wealth of the imperious rich, for it poses an ever-present danger to majority rule.