Will you win the “Throw Your Money At Amazon” Sweepstakes? 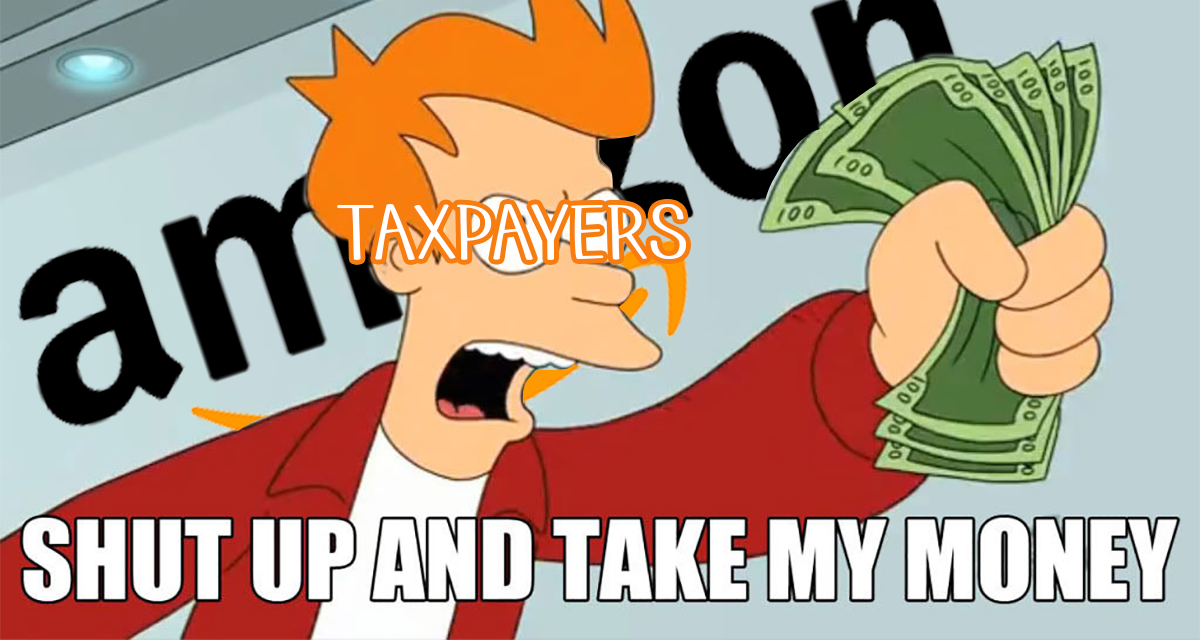 How much are you paying Amazon? I don’t mean how much you’re shelling out for stuff you bought, but how much you and your neighbors are simply giving to this huge and uber-rich on-line retailer.

If you live in Indianapolis, Austin, Chicago, Atlanta, or 16 other lucky cities – congratulations, for you’re a finalist in the “Throw-Your-Money-At-Amazon” Sweepstakes! It’s like Bonnie & Clyde, but instead of robbing banks, Amazon has enticed city and state officials to rob their own citizens, then hand over the loot in the form of tax breaks, land, and other bribes to Jeff Bezos, CEO of Amazon. The locality that offers the most booty “wins” the grand prize of having this thieving corporate behemoth become its new neighbor. At least until Bezos gets a better offer.

So, again I ask: How much are your officials offering?

Shhhh, that’s a secret. Nearly all of the 20 contestant cities won’t tell city council members (much less taxpayers) how many billions they’re throwing at Bezos. Many cities even turned their negotiations over to business groups like the chamber of commerce, letting this handful of unelected, self-interested, private elites secretly make binding promises that would affect all residents without consulting them. In the few places that did release information, it’s amounted to an unfunny joke – Montgomery County, Maryland, for example, made public a 10-page document listing “incentives” it was offering, but every word on every page was blacked out!

This whole flim-flam is abominable and ought to be criminal. Amazon will rake in a quarter-trillion dollars in sales this year, and Bezos is sitting on $166 billion in personal wealth. Shame on him for demanding public handouts, and shame on local officials for robbing the public till to further bloat his ego and fortune.

“Cities’ Offers for Amazon Base Are Secrets Even to Many City Leaders,” New York Times, August 5, 2018.