America to D.C. — Democrats included: We’re mad as hell and you’re not listening!

IN A SEASON THAT SHOULD BE CONVIVIAL AND COMFORTING — filled with family, friends, fun, spiritualism, good food, song, and high spirits–what I am hearing instead from across the country is a surge of angst and discouragement. In conversations, calls, emails, and letters, people in general (and progressives in particular) are expressing profound dismay at the deterioration of America’s democracy, not only because of the BushCheney regime, but also, and especially, because of the fecklessness of the Democratic Congress.

“For crying out loud! Why do we even bother to have elections?” Mark wailed in an email.

I am afraid of what this country has become and that at any minute the people in charge may bomb Iran, and I have lost all hope that there will be any checks and balances,” Marshaleigh wrote, adding bluntly, “Congress doesn’t work.”

“I was amazed that the Republicans in Congress were willing to hand over their own power to the executive branch,” said an email from Brian. “But I have been incredibly disappointed that the Democrat-majority Congress has not only failed to stop Bush’s power grab, but has actually continued to help him do it, even passing laws to legitimize his illegal domestic spying.”

My niece Lisa, incredulous at the Democrats’ cave-in to the Mukasey nomination, left this message on my answering machine:

“I do not understand something I just heard on the radio, and I wanted it explained to me. How is it that they are saying that they probably are going to confirm this man when he has come out and said he believes in expansive presidential powers, and basically didn’t answer the question when they asked him straight out whether or not simulated drowning was torture? And they said they’ll still probably support him? What! Unh! OK. That’s it. Bye.”

Tim sent this email: “I grew up when we had a Congress that was not afraid to take on an out-of-control president and forced him to resign…and did not let the president shred the Constitution.”

Jay bemoaned the dismal performance of Congress in this letter to the editor: “Despite the 2006 congressional elections and the overwhelming antiwar sentiment among our citizens…[Democrats] have become enablers of the White House’s misbegotten Iraq venture.”

Susan wrote, “What little optimism I had is vanishing. I am much more overwhelmed by the Democratic party’s lack of gumption than I was by Bush’s wickedness. And the small ideas offered by the presidential candidates make me cringe. I need help.”

The damage now being done to America’s political psyche by the Democrats’ fizzle is way out of the ordinary. These writers are smart, engaged, committed people who are not easily surprised or discouraged by negative political developments. They constitute the grassroots base of progressive activism in our country, and it is truly worrisome that even they are becoming dispirited–especially as we head into a watershed election year.

It is not some vague funk that’s afflicting the public, not some general ennui caused by seven years of Bushdom. Rather, it’s a growing despair–and a rising national embarrassment–brought on by an ongoing series of specific, disheartening collapses by Democrats, who are turning out to be weaker than Canadian hot sauce. For example:

On a range of other big issues-the Kyl-Lieberman amendment handing Bush a legislative okay for invading Iran; the Senate rewrite of the FISA law to allow more Bush spying on Americans without judicial safeguards, while also giving blanket, retroactive immunity to the giant phone companies that illegally participated in Bush’s mass wiretapping scheme; the shameful cave-in by Senate leaders to a handful of billionaire hedge-fund operators who want to keep a loophole that lets them dodge about $12 billion a year in taxes they owe–the Democratic leadership has been dismal.

It’s tempting to snicker at this. But it’s too important for that. On issue after issue–war, the imperial presidency, health care, jobs, environment, unions, etc.–the public is overwhelmingly progressive and wants action. People didn’t expect progress when the GOP was in charge, but they threw those bums out. What now? As a fellow once said to me, “I don’t mind losing when we lose, but I hate losing when we win.” People need hope that someone’s on their side, that our democracy is not just a rigged game for insiders, that real change is possible.

First, the good news. There is a solid core of progressives in Congress–roughly 72 in the House and 10 in the Senate–and they are battling the bastards every day, as well as cajoling, haranguing, begging, confronting, and otherwise pushing the leadership and the old guard of the Democratic caucus to stand with the people. These members are making a tremendous fight inside the system. In the House, for example, there’s the unstinting, determined antiwar effort of Barbara Lee and Lynn Woolsey, the unrelenting investigative work of Henry Waxman, the insistent pressure by Jan Schakowsky to stop the outsourcing of military functions to private contractors, and the general inside work of the Congressional Progressive Caucus.

The bad news is that practically no one outside Washington knows about these legislators’ inside work. Nor are we outsiders connected to (much less enlisted in) their insider efforts.

The public invisibility of most progressive lawmakers is a failure of America’s conglomerated, celebrity-riveted media, of course, but it’s also a glaring failure of the progressive movement’s strategy. The focus of these stalwart Congress members and the Washington organizations that surround and support them is locked on the inside fight. Simply put, they don’t play to the outside.

As a result, millions of progressive souls in the countryside are not seeing, hearing, or feeling this inside effort. More importantly, those progressives struggling on the inside are not valuing or using our movement’s outside troops. At best, we get the perfunctory request to “write your congressperson” (and we all know how effective that is).

This is a bizarre, self-defeating approach to winning political change, since outside is where genuine progressive power resides!

By focusing almost solely on inside struggles, progressives are playing to the strength of the establishment’s forces–money, lobbyists, and the corporate media. At the same time, progressives are ignoring and alienating their own troops. And they are losing.

We need an outside-in strategy that solicits, rallies, listens to, and deploys our tremendous grassroots strength, bringing it to bear inside Washington. There’s a vast army out here that is ready, willing, able, and eager–but it’s not being used. Ben Cohen, cofounder of Ben & Jerry’s ice cream and longtime progressive leader, tells me that he has told members of Congress time after time, “We’re out here in big numbers, we’re organized and we’re ready–just tell us what to do and we’ll do it.” He says he’s never gotten a call to action.

I think of Abraham Lincoln’s frustration in 1862 with his top commander, Gen. George McClellan. In April of that year, the general and his Army of the Potomac had the Confederate forces outnumbered and outmaneuvered in Virginia. A decisive victory was at hand…yet McClellan would not move his troops. Lincoln sent message after message alternately ordering and beseeching his general to attack and win the war. But nothing. The head of the army wouldn’t budge. Finally, after the Confederate soldiers had been allowed to slip away and avert certain defeat, Lincoln removed McClellan from command with a letter that said, “If you don’t want to use the army, I should like to borrow it for a while.”

Learn from the past

Rather than thinking of themselves as lone rangers fighting in Washington on our behalf, congressional progressives need to act like leaders of a mass movement, mobilizing and targeting us to be ground troops in a fight that belongs not just to them but to all of us.

This collaborative approach has proven highly effective in the past. As a young antiwar activist in 1970, I was part of one such outside-in effort. Sen. George McGovern and Rep. Al Lowenstein created the Committee for a Vote on the War, headquartered in two townhouses on Capitol Hill. I was among the staffers whose job was to coordinate grassroots war opposition with the legislative actions of anti-Vietnam lawmakers. The insiders and leading outsiders jointly developed strategy, with a steady flow of information, vote checks, and action items going both ways. The local forces could not only move at a moment’s notice to approach a targeted lawmaker, but they could also deploy members of Congress out to the hustings to bring information, rally the forces, generate media coverage, and unify the effort.

I don’t know how to recreate something like this, but I believe it must happen. We can’t have a successful progressive movement if our elected officials are disjoined from the movement.

Let’s start talking about this problem. The whole of our effort has to become greater than the sum of its separated parts. If you have ideas for how to bring this about, share them in the comments below, in blogs, in meet-ups, and in every forum you can think of. If your own members of Congress are progressive, urge them to take a lead in uniting the inside with the outside for concerted action. Also, push the Congressional Progressive Caucus (see Do Something) to provide leadership. By connecting with each other, using the unique strengths of insiders and outsiders, we can raise our spirits…and start winning.

Here’s to a happier New Year. 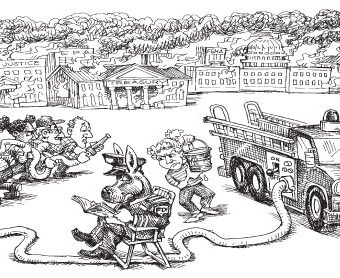