The surge is on in Afghanistan! Unfortunately, what appears to be most effective is not the 30,000 additional US troops that President Obama has poured into this hellacious war in the past few months, but a wholly unexpected surge by the enemy.

Gen. David Petraeus’ surge strategy was to concentrate our soldiers in the south and east of the country, attacking the Taliban where they are strongest. The gleaming gemstone of this plan was to be the taking of Kandahar, Afghanistan’s second largest city and the birthplace of the Taliban. This goal was supposed to have been achieved by now, but… well, stuff happens, or in this case doesn’t happen.

Far from suffering a demoralizing defeat, the Taliban still control Kandahar and have surged throughout the country. Four years ago, they had strongholds in only four of Afghanistan’s 34 provinces. Now they’re in 33 of them, and Afghanistan is more dangerous than any time since our 2001 invasion.

Election officials had to close hundreds of polling places in 25 provinces for September’s parliamentary elections, and international observers could not even go into rural areas, where most Afghans live. This gave a free hand to warlords and political power brokers to commit massive voting fraud.

Even America’s bipartisan foreign policy establishment has begun questioning whether this war is winnable –or worth the enormous cost we’re paying in American lives, money, and world reputation. A member of the elite Afghanistan Study Group said: “A US military victory over the Taliban is simply not necessary to protect US interests.” Bingo! 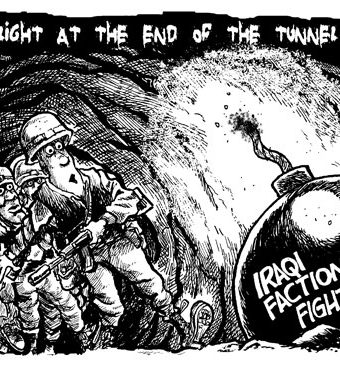