The entire court system is infested

Unfortunately, the corporatization of America’s judiciary is not just a problem at the top. For more than 30 years, there has been a concerted effort by such ultra-wealthy corporate supremists as the Kochs, Scaifes, DeVoses, Coors, and Murdochs to place extremist, laissez-faire ideologues throughout the federal court structure. Using their extensive, well funded, and coordinated network of front groups, these moneyed elites can now move litigation through corporate-friendly courts at the district, appellate, and supreme levels.

For example, the legal effort by right-wing operatives to scuttle Obama’s health care reform has taken the path of least political resistance, for their lawyers know how to go court shopping. They file their cases in the courts of judges who were put there because they are ideologically opposed to such things as government regulation of insurance giants and health care conglomerates. Some two dozen of these ‘Obamacare’ cases have been generated in the past few months, pushed by a who’s who of corporate-funded fronts, including the American Center for Law and Justice, the Goldwater Institute, Judicial Watch, Liberty University, the Thomas More Law Center, the Pacific Justice Institute, and the Pacific Legal Foundation. Carefully choosing their courts, they’ve filed multiple cases that go after various parts of the reform law. As an official of the Goldwater group puts it: “[Obama’s] health care plan will not die in a single sweep. It will take a thousand cuts.”

One of these cuts has come from US District Judge Henry Hudson of Richmond, Virginia. On December 13, he ruled that a key provision of Obama’s reform is unconstitutional, a ruling at odds with 14 other federal judges who’d dismissed similar challenges. The judge had to resort to tortured reasoning from the Civil War era to push this flawed case forward, but, hey–you can’t let legal niceties get in the way of ideology.

Peek under Hudson’s judicial robe, and you’ll find a naked partisan with a long career in hard-right Republican politics. A protege of Ronald Reagan and his detestable attorney general, Ed Meese, Hudson ran unsuccessfully for a Virginia congressional seat in 1991, then was given two GOP political appointments in the state before George W lifted him onto the federal bench in 2002.

Even today, as he sits in judgment of politically motivated cases, Hudson continues to draw annual income as an owner of Campaign Solutions, a Republican political consulting firm. One of its successful clients is Virginia’s GOP attorney general, Ken Cuccinelli, who was elected with the firm’s help in 2009. Ken just happens to be the official who filed the right wing’s case against Obama’s health care reform in Judge Hudson’s court. 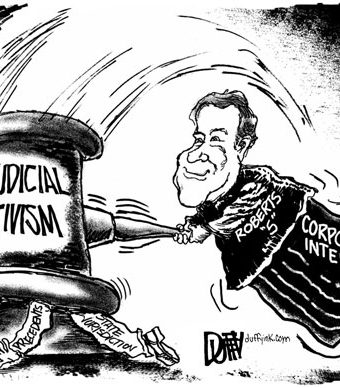